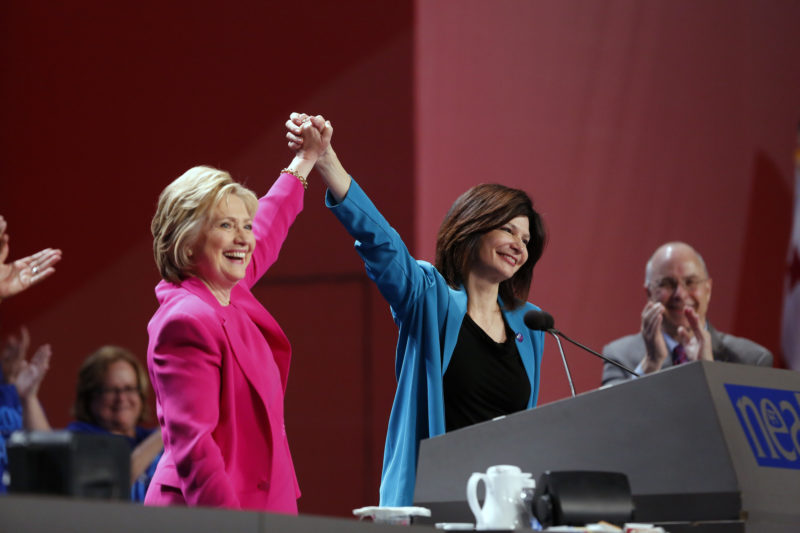 The 95th NEA Representative Assembly (RA) kicked off on the morning of July 4 in typical energetic fashion as music and cheers engulfed the Washington D.C. Convention Center. The mood soon changed, however, when NEA President Lily Eskelsen García took the stage to deliver her keynote address and to announce that, before the RA's work began, something very important had to be done first.

“We will not begin without honoring those who lost their lives for no other reason than that they were gay, lesbian, bisexual, transgender,” Eskelsen García informed the delegates. “Today, we mourn with Orlando.” Forty-nine educators then filed to the front of the stage with the images of the 49 people who were killed in the Pulse nightclub shootings in Orlando on June 12.

“There’s a real world out there, and it’s not a safe place. It’s dangerous, and the work we’ll do in this safe place is important, because it has the chance to change the world out there. That dangerous world needs us,” Eskelsen García said in her keynote address. “We’re living under a toxic, choking environment where entire groups of people are demonized, targeted and terrorized.”

As the top decision-making body for the 3 million-member NEA, the RA responded by calling on the Association to join a national effort to prevent acts of violence targeted at LGBTQ individuals and to protect their civil rights. This New Business Item calls on a multi-pronged approach in the courts and legislatures.

The delegates also took action on the school-to-prison pipeline, approving a new policy statement to serve as a call to action to help create awareness of the issue by educating NEA members and the public about the striking racial disparities among those most affected by it. 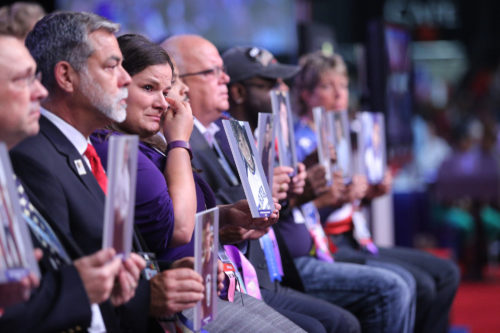 At the 2016 NEA Representative Assembly, educators hold up images of the 49 people who died in the Pulse nightclub shootings in Orlando on June 12.

“We are making a long-term investment. An investment that will command persistence and struggle and commitment and a whole lot of work from every single one of us,” said NEA Vice President Becky Pringle.

Fear and divisiveness has always been used as a cudgel by politicians, but the ascent of Donald Trump – and his toxic brand of racial demagoguery – has magnified the stakes of the upcoming election.

"I am terrified that this man has made it this far. This unfit, unworthy man will be the Republican nominee for president of the United States of America," Eskelsen García said during her keynote. But on July 5, delegates were visited by presumptive 2016 Democratic presidential nominee Hillary Clinton, who "believes that as a nation, we’re stronger when we’re together," Eskelsen García added.

In her address to the RA, Clinton spotlighted her priorities for public education, vowing to elevate the teaching profession, de-emphasize standardized testing, and harness community resources to help create great public schools for every student regardless of Zip code. And it’s time to stop the war on teachers, Clinton told the delegates. 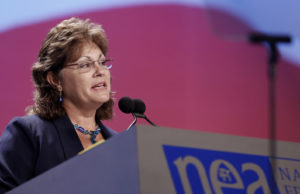 “I’m with you. If I’m fortunate enough to be elected president, educators will have a partner in the White House – and you’ll always have a seat at the table,” she announced to resounding cheers from the delegates, who following the speech voted to overwhelmingly recommend Clinton for the general election.

NEA members were instrumental in the passage of the Every Student Succeeds Act that ended the era of No Child Left Behind. For shepherding through a better law and for listening to the voices of educators, NEA presented its 2016 Friend of Education Award to Sens. Patty Murray of Washington and Lamar Alexander of Tennessee, who both accepted the honor in person.

The RA also spotlighted the 2016 NEA Social Justice Activist of the Year, the California-based Union City Educators, who have brought Pilipino heritage into the schools through ethnic studies curriculum, student and community engagement, and activism.

Delegates heard from NEA Education Support Professional (ESP) of the Year Doreen McGuire-Grigg, who spoke of the herculean efforts of ESPs throughout the nation. She advocated for the inclusion of ESPs, and underscored the value they bring to other educators and students.

“We are more than partners, we are problem solvers. We are an untapped resource and we are here to support the whole student, the whole school and the whole community. We are the secret weapons,” McGuire-Grigg said.

In her speech, 2016 National Teacher of the Year Jahana Hayes urged delegates to never underestimate the power they have to transform the lives of their students. 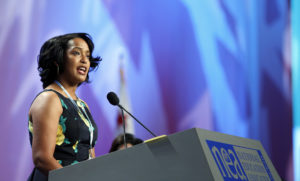 How do we ensure that educators will always serve this critical role? asked NEA Executive Director John Stocks. After all, more than 2 million new educators will be entering the workforce over the next five years alone. In his address to the RA, Stocks warned the delegates that the new generation of educators may not necessarily understand how vital their association can and will be to them and their students.

“We must become relevant to them, to help them meet the changing needs of their students…to help them be successful educators, and to tap into their idealism,” Stocks said. “And we must act with urgency.”

At every RA, delegates are charged with electing new NEA leaders. In addition to voting for new Board of Director members, delegates  also re-elected Maury Koffman of Michigan and Kevin F. Gilbert of Mississippi to serve another three-year term each on the NEA Executive Committee.