"When educators, parents, communities, and students stand together, we are a formidable force and together we can fight and win.”
By: Tim Walker
Share 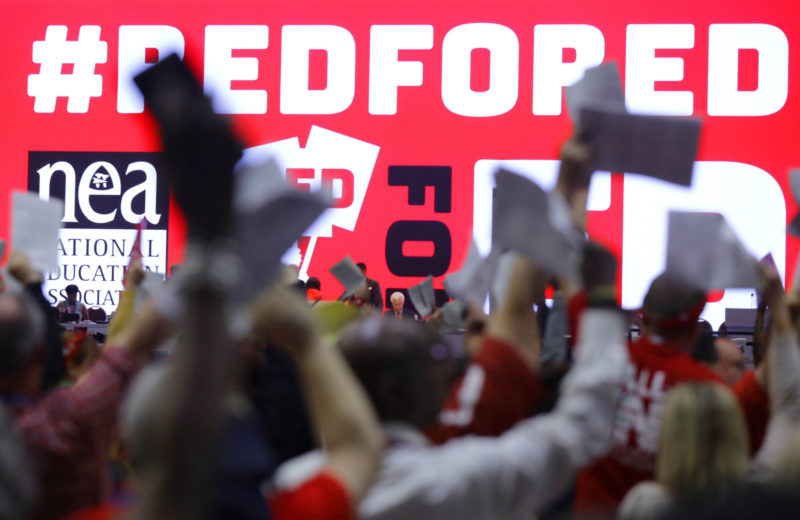 The 2018 National Education Association Representative Assembly (RA) convened less than a week after the U.S. Supreme Court struck a blow against working people with its decision in Janus v. AFSCME. How to thrive in a post-Janus  world was just one of the many pressing issues on the minds of the 6,200 delegates as they entered the Minneapolis Convention Center on July 2.

The challenges to educators and public schools are mounting, but by the closing gavel four days later, the delegates left Minneapolis ready to harness the energy of the burgeoning Red for Ed movement and meet them head on.

These are dark days, NEA President Lily Eskselsen García told the gathered educators in her keynote address, because "billionaires have placed themselves over the rest of us; they have no sense of servant leadership; Billionaires believe that they are our rulers."

But there is a groundswell of energy and support for public education that is already having an enormous impact. The movement started in West Virginia in February and quickly spread to Kentucky, Oklahoma, Arizona, Colorado, and North Carolina. 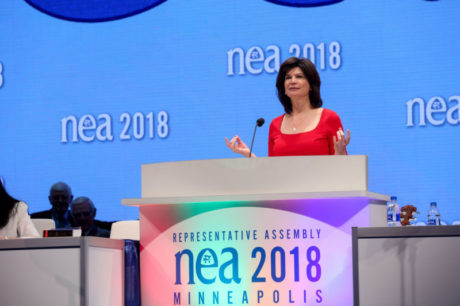 “You spoke the powerful truth that we are fierce fighters who will stand up for ourselves and for our students and we will be heard!” Eskelsen García told the cheering delegation.

Educators have a powerful ally in students. Whether it's demanding lawmakers properly fund our schools or take action to help keep students safe from gun violence, young people have taken up the call.

"You see them come together in a collective voice. You feel the power of their action – they’re not complaining. They’re not waiting for permission," Eskelsen García said, before she yielded the stage to one of those student leaders, David Hogg, survivor of the Parkland school shooting and outspoken advocate for common sense gun laws. 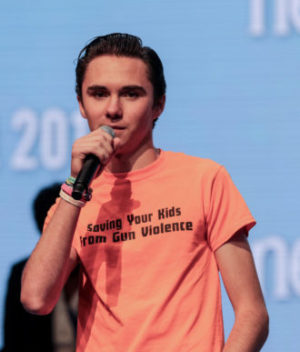 “We have been speaking up, mobilizing, and standing strong because our friends and family mean the world to us,” Hogg said. “We are young and that means we don’t have to accept the status quo. And we never will. We intend to close the gap between the world as it is and what it should be.”

“We can’t be in a movement by ourselves and for ourselves," he said. "What the Red for Ed movement has shown us is that when members and non-members, parents, communites, and students stand together, we are a formidable force and together we can fight and win.”

The RA also honored three of the nation's most outstanding educators of 2018: Education Support Professional of the Year (ESP) Sherry Shaw, Teacher of the Year Mandy Manning, and - for the first time ever - the NCHE Higher Educator of the Year Loretta Ragsdell.

2018 ESP of the Year Sherry Shaw on the RA stage (Photo: Rick Runion)

Shaw, a special education paraeducator in Wasilla, Alaska, manages a program that provides food, clothing, and hygiene products to families affected by drug abuse, domestic violence, and homelessness. In her speech Shaw urged the delegates to "crack the code" of students' worlds.

"They show up in our classrooms, our hallways, on our busses, and in our cafeterias in all kinds of ways,” Shaw said. “Often, there is no room for learning. They are just trying to figure out how to survive the day.”

ESPs play critical roles in helping these students navigate through this uncertainty. “We get up every morning before the sun rises and do our jobs, and do them well,” she said. “We care for our kids. We nurture them. We love them. We educate them. We challenge and guide them," Shaw said. 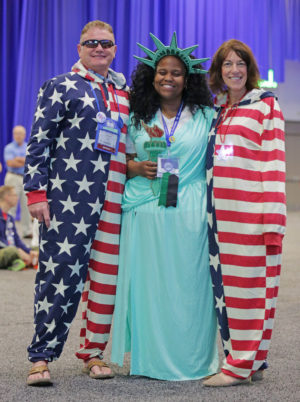 Teacher of the Year Manning spotlighted immigrant and refugee students, a population she serves so loyally at Joel E. Ferris High School in Spokane, Washington.

"In the past month, we have seen children ripped away from their families, families detained indefinitely as a tradeoff for keeping them together, the Supreme Court upholding the President’s xenophobic travel ban, and naturalized citizens now have no assurance they’ll maintain their status. We live and educate in a time when not all students feel wanted, welcomed, loved enough, or that they matter,” Manning said.

Manning introduced two remarkable students to the delegation, Iya and Faaya. Both came to the United States with their families only a few years ago and have thrived in their public schools, thanks in large part to the educators who looked out for them.

“[Students like Iya and Faaya] are showing us how it’s done," Manning said. "They prove that in our schools we are creating confident, strong citizens, who are collaborative, compassionate, and powerful.”

And the first-ever NCHE Higher Educator of the Year Loretta Ragsdell addressed the RA on July 4. A self-described "guerrilla educator," Ragsdell said she educates at every opportunity — “the grocery store, the laundromat, Macy’s! I like to think I was born with a textbook in one hand and a lesson plan in the other.” 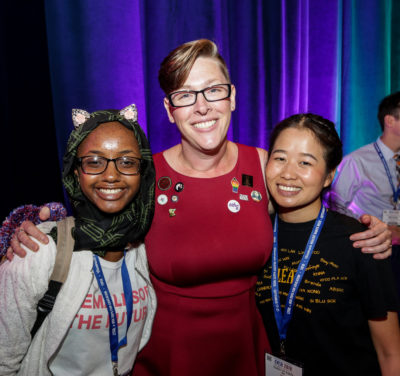 2018 National Teacher of the Year Mandy Manning backstage at the NEA RA with students Faaya (left) and Iya.

The RA also heard from Ted Dintersmith, entrepreneur and author of What School Could Be, and the 2018 recipient of the 2018 NEA Friend of Education Award.

Speeches and celebrations are always highlights of any RA and 2018 was no exception, but the business of the RA is ... business. Delegates spent the lion's share of their time in the Convention Center debating and adopting new policy statements, resolutions, amendments to existing policies and more than 100 new business items, which, taken together, create a detailed NEA education policy blueprint for the upcoming year. 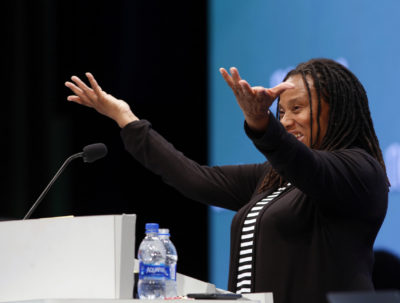 "We are living in difficult times, but I believe that only through organizing and collective action can we effect change," Rodriguez said.

On the final day of the RA, as delegates celebrated Red for Ed, Marisol Garcia, vice president of the Arizona Education Association, stood on the convention floor to deliver remarkable news about how educators are leading this change.

On July 5, public education activists in her state submitted 270,000 signatures (100,000 more than was nedded) to put an initiative on the November ballot that, if approved, could raise hundreds of millions of dollars in new education funding.

"This spring, when we walked out, we walked out for our children, and we did it with the support of NEA," Garcia said as the delegates stood and applauded. " We knew you were with us, and when we go to the polls in November, we will win!"