2018 Teacher of the Year: Our Students Give Us Hope

"We are creating confident, strong citizens, who are collaborative, compassionate, and powerful," Mandy Manning tells delegates. 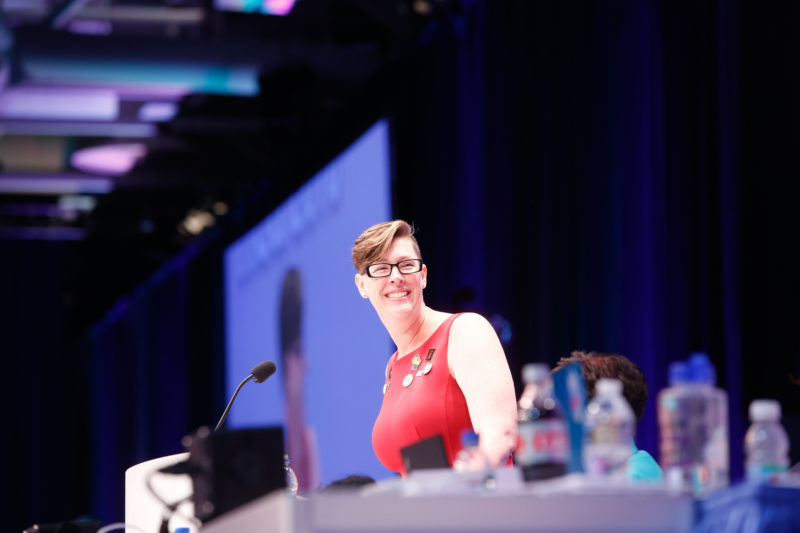 2018 National Teacher of the Year Mandy Manning at the NEA Representantive Assembly in Minneapolis.

Washington educator Mandy Manning was named the 2018 National Teacher of the Year in April for her unwavering commitment to the immigrant and refugee students she teachers at Joel E. Ferris High School in Spokane. Her devotion to newcomer students was on display today at the NEA Representative Assembly. Honored by the more than 6,000 delegates at the Minneapolis convention center, Manning spoke briefly so that she could pass the microphone to two students who, she said, "teach us how to keep on marching, and, ultimately they give us hope."

When Manning, a member of the Spokane Education Association,  visited the White House in May, she handed President Trump notes from some of her immigrant and refugee students expressing their concerns about the current toxic political climate. Manning’s students come to the U.S. from all over the world: Syria, Chuuk, Iraq, Afghanistan, Guatemala, Myanmar, Sudan, Mexico, and Tanzania.

Her students' fears, Manning told the delegates, have been confirmed by the inhumane rhetoric and policies that have come out of the White House in recent weeks.

"In the past month, we have seen children ripped away from their families, families detained indefinitely as a tradeoff for keeping them together, the Supreme Court upholding the President’s xenophobic travel ban, and naturalized citizens now have no assurance they’ll maintain their status. We live and educate in a time when not all students feel wanted, welcomed, loved, enough or that they matter," Manning said.

While there's a lot to talk about in one speech, Manning chose instead to share her time on the RA stage with two newcomer students. "They are the ones most impacted by these policies and because, frankly, right now, our students are our role-models. They’re showing us the true power of a collective voice," she said.

With that, Manning introduced Iya, a Hmong student from Laos, who just graduated from LEAP high School in St. Paul, and Faaya, a Muslim student from Oramia, who is about to attend FAIR Senior High School in Minneapolis.

Iya came to the United States only three years ago. She recounted how happy she was at LEAP.

"I felt happy and excited going to school everyday. LEAP is a small school with less students and loving teachers and that’s all I want," Iya said. "It is a safe community and is another place where I can call home. It gave me hope."

Faaya is about to become a freshman at FAIR Senior High School in Minneapolis. She's more comfortable in school now, but the transition was difficult. When she was in 7th grade, students teased her and pulled off her hijab.

After a teacher stepped up to stop the bullying, school life began to get easier for Faaya.

"Take the voice you have to speak," she urged the delegates. "Students are your stars and you are the night sky. The power of education has no borders." 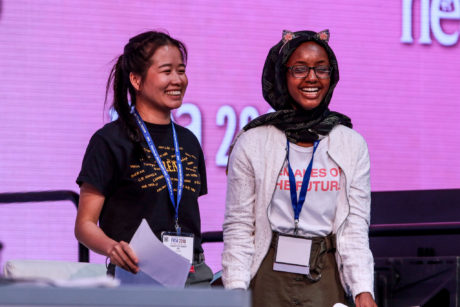 During her speech, Mandy Manning turned the microphone over to newcomer students, Iya (right) and Fayaah.

Visibly moved by the students' remarks, Manning returned to the microphone and closed by telling the audience about one of her own students, Safa, who arrived in Spokane in 2012 as a refugee from Sudan. A dedicated student, Safa graduated from high school in 2016. Now a junior at Eastern Washington University, she is studying to be an elementary school teacher and she recently became a citizen.

Safa recently appeared with a proud Manning before a legislative K-12 committee at the state capitol to advocate on behalf of English Language Learners.

"Just like these amazing students you heard from today, Iya and Faaya, Safa is a shining example of the potential all of our students represent," Manning told the delegates.

"They are showing us how it’s done. They prove that in our schools we are creating confident, strong citizens, who are collaborative, compassionate, and powerful."