2019 Teacher of the Year: 'Everyone Benefits From Diversity'

Rodney Robinson tells RA delegates that lawmakers who refuse to stand up for our most vulnerable students will face a day of reckoning on election day. 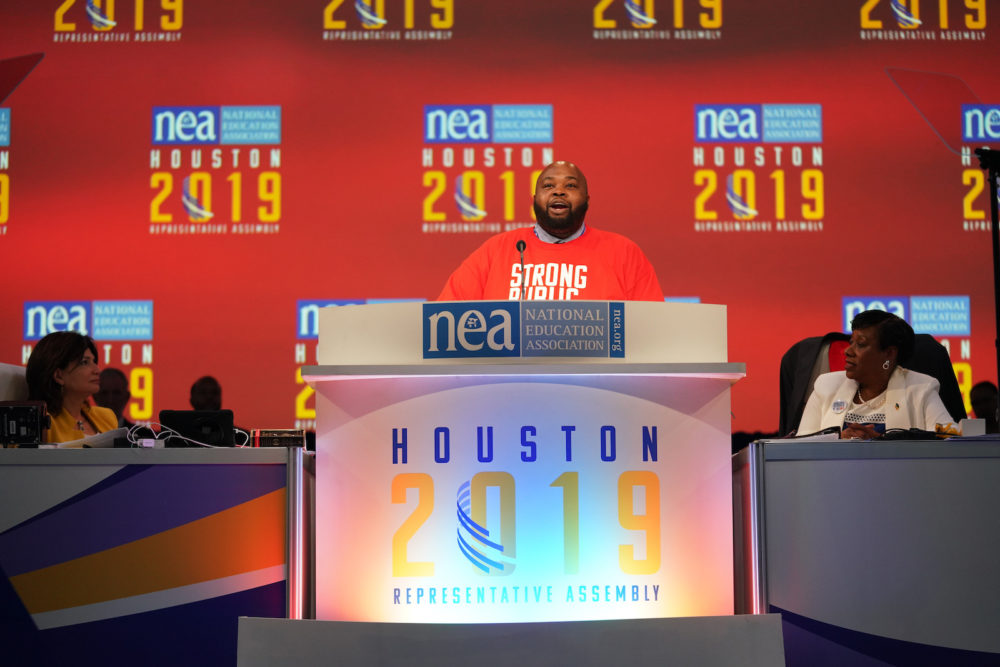 Rodney Robinson, 2019 National Teacher of the Year addresses the delegates during the NEA Representative Assembly.

Rodney Robinson, the 2019 National Teacher of the Year, brought the 7,000 NEA Representative Assembly delegates to their feet on Saturday with an impassioned plea for diversity, increased opportunity for our most vulnerable students, and a day of reckoning for politicians who refuse to fully-fund public education.

Robinson teaches social studies at Virgie Binford Education Center, a school inside the Richmond Juvenile Detention Center in Richmond, Virginia. He became a teacher to honor his mother, who was denied the opportunity due to poverty and racism in rural Virginia.

As Robinson told RA delegates, his mother was still his greatest teacher, imparting life lessons that shaped his career as an educator - namely an early understanding of the need for equity. Not all children grow up on a level playing field and some need more help in order to achieve.

"A one-size-fits all model of equality does not work in education and education funding," Robinson said. "Equity ensures that the students suffering from multi-generational poverty receive the same resources and education as those born with a silver spoon in their mouths."

The staggering budget cuts that have devastated the public education system in so many parts of the country have to be reversed. "The national economy has recovered from the Great Recession and is surging at record highs.  It’s time the children of America received their fair share of the nation’s resources!" Robinson said.

Economic and resource equity is integral and long overdue, but Robinson shifted the focus of his speech to another urgent gap that deserves the same level of attention.

Cultural equity, Robinson explained, continues to be a staggering challenge for the U.S. education system.

Robinson singled out the nation's severe shortage of teachers of color in our classrooms. While more than half of the school-age population are students of color, 80 percent of teachers are white. Study after study has demonstrated the undeniable benefits of a more diverse teacher workforce - particularly for students of color.

"We need to make sure students have teachers who look like them and values their cultures," Robinson said. "All students deserve teachers and role models who appreciate and understand the unique gifts they bring to the table no matter their race, religion, gender status, or sexual orientation.

"We need more teachers of color in American because everyone - and I mean everyone- benefits from diversity!"

Robinson told the delegates about TJ, one of his recent students.  TJ's story is in many ways sadly familiar: He was born into poverty to a drug-addicted mother, misdiagnosed in school and placed in an underfunded special education program. TJ then attended a dilapidated, mold-infested, overcrowded and understaffed high school where he never received the attention he needed. He was soon arrested and convicted for a violent offense and sent to the diversion program where Robinsons teaches.

With Robinson's help and the assistance of a full-time psychologist, TJ began to show real signs of progress.

"We were able to give him the academic, mental, and social help he needed to be better because we are a fully funded school with teachers who look like him and understand his culture," Robinson told the delegates.

Still, Robinson is worried. TJ will soon return to the same underfunded, understaffed school that was unable to provide him with the attention and resources he needs.

"He doesn’t have any counseling at the school to improve his mental health," Robinson said. "I hope it works out for him but it doesn’t look good. He needs special resources and they are not available to him... Why does a kid have to go to jail to get a full-funded school and the resources they need to be successful?"

Robinson closed his address with a powerful plea for educators everywhere to join their colleagues already on the frontlines to step up and say "enough is enough!"

"We have hit the point of a national emergency ...I ask the legislators of America, what is your life’s blueprint when it comes to the kids of this country?" Robinson said, paraphrasing Martin Luther King.

"I promise you, your judgement day will not be on your final day on this earth but on election day when millions of Americans led by every single person in this crowd march to the polls, break down the doors, kick you out of office and say "Our kids deserve better!"