"The power of this union and the collective voice of our 3 million members was on full display today," said NEA president.

Backstage at the George E. Brown Convention Center in Houston, Texas, 10 presidential hopefuls were ready to make their case to educators at the first ever #StrongPublicSchools Presidential Forum. Across the nation, educators are ready to build on the momentum of the #RedforEd movement and play a powerful role in the 2020 campaign.

The forum, Eskeslen García explained to the delegates, was not about promoting any specific candidate.

"We are promoting our agenda—what we want for our children, our profession and for our communities." 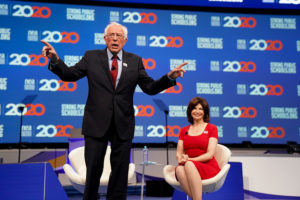 The questions came from NEA members and everything was on the table—education funding, educator pay, school privatization, equity, gun safety, student debt, and, of course, Betsy DeVos.

"What I love about this format is that it's not just because we will be hearing from the candidates," Eskelsen García said as the forum began. "It's because they will be listening to you." 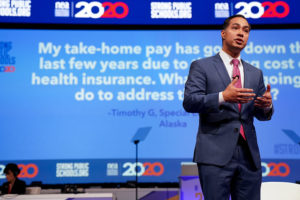 “Ah! I’ve got a plan for that! It starts with a wealth tax on the top one-tenth of the 1 percent—people who have more than $50 million, who would pay 2 cents on every dollar they earn after $50 million,” said Warren. With that two cents, she said, we could pay for universal childcare; pre-K; a living wage for preschool teachers and childcare workers; tuition-free technical schools, community colleges, and four-year colleges; and also cancel student debt.

As de Blasio told the delegates, "there's plenty of money to fund education. But right now it's in the wrong hands."

“Let's reverse the Trump tax cuts, take $20 billion away from the oil and gas industry, and put it into education to fully fund Title 1 and IDEA," said Governor Inslee.

“I’d invest $100 billion in school districts to pay teachers for mentoring, to teach other teachers,” said Biden. "Folks, we need you in the schools teaching, not working two to three jobs!’" 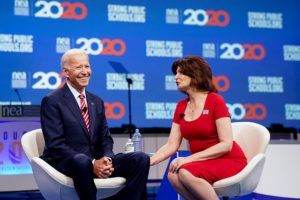 Meanwhile, Harris, who wore a #RedforEd bandana around her wrist, pointed to the federal government’s obligation to pay for special education, which it has never met. “There is a mandate that the federal government pay 40 percent, but they’re not doing it, they’re at about 15 percent, and it’s actually immoral as far as I’m concerned,” she said.

"As educators, you see the impact on our students, each and every day, of the lack of healthcare. My plan calls for investing in community-based schools with wrap-around services so that students can avail themselves of services and be healthy.” 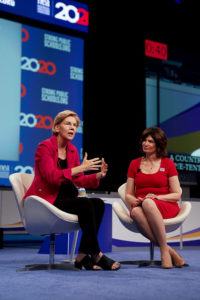 Every candidates roundly supported increased pay for educators. “This is partly about money, but again it’s about respect. It’s about recognizing the work that every day our teachers do,” said Warren, who promised to put more money into public schools and strengthen unions.

“Every teacher should make at least $60,000,” said Sanders, who also promised to raise the federal minimum wage to $15 “so that everybody in a school is paid at least a living wage.”

Meanwhile, Ryan told delegates “we need an economic plan in the United States of America that rebuilds the middle class. For too often, we have not held accountable the people who have run away with the gold. It’s like the country song—you get the gold mine, and I get the shaft.”

The Next Secretary of Education

"I promise you," Harris told the delegates. "The person I nominate will come from public schools." 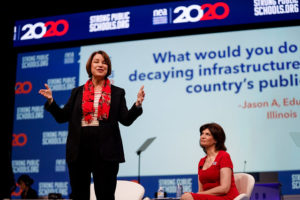 Replacing Education Secretary Betsy DeVos with an individual who has worked in the public school system was one, if not the, most popular promise made at the forum.

"I want to see someone who has seen a child light up, become engaged for the first time, seen a door open for a child. Betsy DeVos need not apply!" Warren said.

It won't stop there. The candidates promised to give educators a "place at the table" on policy. "You're the experts," said Biden. "You should be part of the agenda. You should craft the policy. You're the ones who know it." 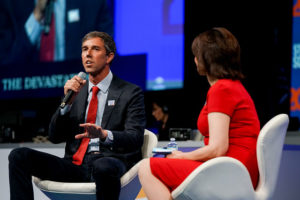 O'Rourke vowed, if elected president, never to spend "one dime on vouchers for private schools."  O'Rourke told the delegates that while he believed there was "a place for public, non-profit, charter schools," he strongly opposes the unaccountable, for-profit charter schools that siphon billions of dollars from public schools. 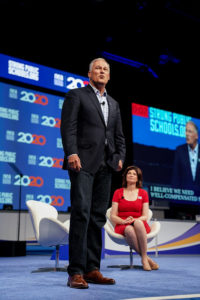 Many of the questions that delegates asked candidates raised the issue of inequities in public schools and systems. “I know firsthand the impact of growing up in intensely segregated school districts,” said Castro. “If we want to make sure every child can get a great public education, in addition to investing in our educators and treating them with respect, we also need to tackle housing segregation,” who also supports voluntary busing, he said.

Meanwhile, both Sanders and Biden said they would triple funding for Title 1, and O’Rourke said he’d set aside $500 billion to erase the disparity between majority-white and majority-minority school districts. Klobuchar also spoke about Dreamers, saying, “You know these kids. They’re in your schools…What I would do in my first 100 days is make sure Dreamers are safe and secure.”

Many of the candidates were asked to address the epidemic of gun violence. Harris made a passionate vow to push Congress to take action. 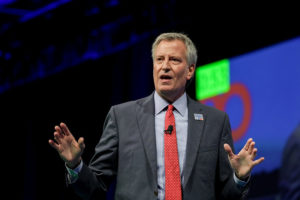 "On day 1, I will give the Congress 100 days to get their act together, and if not, I will take executive action to put in place the first comprehensive universal background checks and ban the importation of assault weapons i our country!"

Arming teachers, said Inslee, was an "idiotic idea." In addition to gun safety measures, Inslee and other candidates emphasized the need for comprehensive mental health services in schools. "We need more counselors and psychologists to help students deal with domestic violence, homelessness, all the problems of growing up," Inslee said.

Ryan agreed. “It’s imperative for us to have social and emotional learning in every school so  that we can make sure that all of these kids are connected to each other, to the teacher, to the school… So help me God, if we’re going to transform our schools, before we start talking about tests, we have to start talking about how we take care of our kids [and] how we address their trauma.” 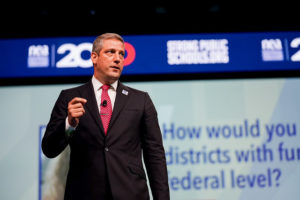 Candidates knew they were speaking to leaders of the nation’s largest labor union—and many voiced support for collective bargaining rights. The best way to “raise teacher pay and get more resources into our public schools” is to “strengthen our teacher unions. Make it easier to join a union and give those unions more power when they negotiate,” said Warren.

O’Rourke told delegates that he recently visited Iowa, where state legislators gutted union rights, and “those educators are leaving Iowa…I want to make sure we guarantee the rights of every educator to organize, including Iowa, and right here in Texas.”

As student debt tops $1.6 trillion in the U.S., many candidates said they would make higher education more affordable. “If we could bail out the crooks on Wall Street to the tune of billions of dollars, we surely can cancel student debt in America,” said Sanders. 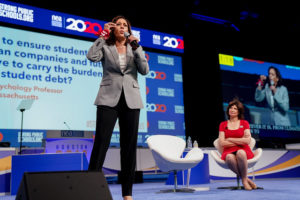 Meanwhile, Klobuchar spoke to the need to improve the federal Public Service Loan Forgiveness (PSLF) program, “to make it actually work!” Harris, who also would reform PSLF and provide “debt-free college,” pointed to her experience as attorney general in California, where she sued sued one of the largest for-profit college chains in the U.S., Corinthian College, “and put them out of the business,” she said. “And the reason is, they were predatory in their practices, as are so many in this field.”

After the forum, Eskelsen García said the 7,000 delegates were clearly energized by the event.

“The power of this union and the collective voice of our 3 million educator members was on full display today. ...This must be at the center of the 2020 campaign conversation. Educators are ready to make their presence felt in this election and we will play a vital role in choosing who becomes the next president of the United States.”

Visit StrongPublicSchools.org to find out more about candidates’ positions and events, submit questions to the candidates, watch videos and get news from the campaign trail, as well as take action to support public education.