Educators knew from the start that DeVos would be a disastrous choice, and she has been. Here are five times she has harmed our students, educators, and public schools. 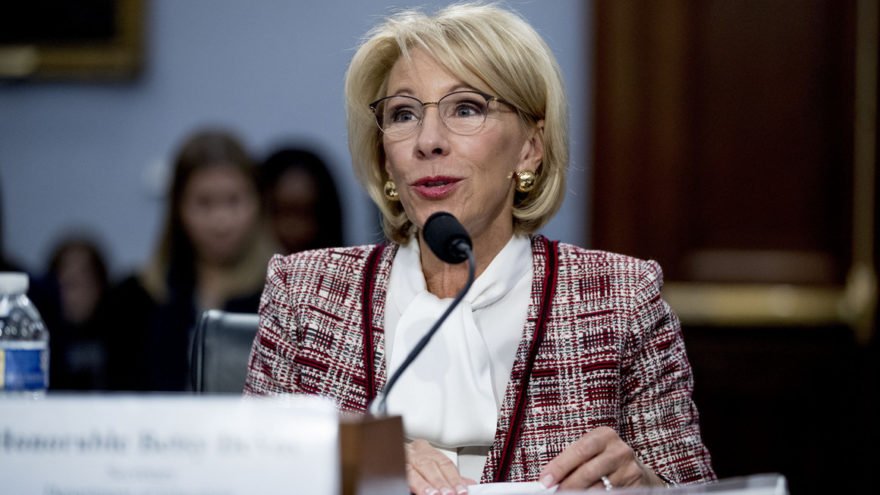 Over the two years since Betsy DeVos was confirmed as President Trump’s secretary of education, she has worked against the best interests of public schools. From proposing funding cuts to promoting privatization to rolling back protections for vulnerable children, she has ignored the voices of educators across the country about what students need.

DeVos has never worked in a public school. She has never been a teacher, a school administrator, nor served on any public board of education. She didn’t even attend public schools or send her children to public schools.

As NEA President Lily Eskelsen García, a former elementary teacher from Utah, says DeVos is “the first secretary of education with zero experience with public schools…. She is out of her league when it comes to knowing and doing what works for public school students.”

Educators knew from the start that DeVos would be a disastrous choice, and she has been. Here are five times she has harmed our students, educators, and public schools.

1. She wants to privatize public schools

Betsy DeVos has consistently pushed to expand federal vouchers that will take money from public schools to give to private schools. Her voucher bill is a brazen scheme that would take $50 billion from public schools over 10 years. Meanwhile, DeVos and President Trump proposed to cut education spending by $8.5 billion in 2020, eliminating more than two dozen programs that help public schools, including teacher development, academic support and enrichment, and after-school activities.

In the 2020 State of the Union, it was clear she had influenced Trump when he called for a national voucher program. She has also opened the door for private schools and religious organizations to receive a windfall of taxpayer funding. DeVos says the U.S. Department of Education will no longer enforce provisions that require federally funded services be provided only by public employees or contractors independent of private schools and religious organizations. It is an unprecedented move for a federal agency to indicate its intent not to enforce the law as written.

2. She won’t support students with disabilities

Starting off on the wrong foot, Betsy DeVos could not even address fundamental questions about the Individuals with Disabilities Education Act, including whether states and localities have to comply, during her confirmation hearing. Since then, she has stalled efforts to fight racial inequities in special education, causing a judge to rule against the education secretary’s proposal to delay an Obama-era rule that protects minority students in special education. The judge referred to DeVos’ attempted delay as “arbitrary and capricious.”

When DeVos proposed a $7 billion cut to education funding, she included a 26 percent reduction to state grants for special education and millions of dollars in cuts to programs for students who are blind.

In 2018, the DeVos-led Education Department attempted to strip its employees of collective bargaining rights by unilaterally imposing a “collective bargaining agreement” on 3,900 union staffers represented by the American Federation of Government Employees Council 252, saying they will no longer bargain with them.

Long before she was secretary of education, Betsy DeVos and her husband, Dick DeVos, wielded their immense wealth to fund the legislative lobbying that gutted workers’ rights in their home state of Michigan.

4. She wants more guns in our schools

Following her viral quote about allowing guns in Montana schools to protect against a “potential grizzly,” DeVos endorsed a plan to put guns in schools. She proposed using federal grant money intended for academics and student enrichment to purchase firearms for teachers to keep in their classrooms.

She eventually backed away from the plan, after educators and parents expressed outrage, citing the potential danger to students and teachers alike. Still, she served as chair of Trump’s school safety commission, whose recommendations do little to protect students. The commission was formed after the largest mass shooting at a high school, in Parkland, Fla. Instead of addressing gun laws, the commission instead dismantled students’ civil rights protections by rescinding an Obama-era policy directing schools not to punish minority students at higher rates than white students.

5. She works against victims of assault

In 2017, DeVos rescinded sexual assault guidelines and weakened protections against sexual harassment and assault afforded by Title IX. DeVos attempted to explain, saying, “Any perceived offense can become a full-blown Title IX investigation. But if everything is harassment, then nothing is.” The National Women’s Law Center said DeVos’ approach “signals a green light to sweep sexual assault further under the rug.”

Later, she introduced regulations requiring cross-examination of victims of campus sexual assault. Experts, educators, and parents agree that the proposal will effectively deter survivors from coming forward to report an assault. Universities would be held less responsible. Managing attorney of the Women’s Law Project Terry Fromson says these policies would allow schools to “ignore much of the sexual harassment that occurs in schools.”