Advocating for Racial Equity in Our Schools

A union-led program organizes educators in a movement to recognize and respond to racial inequities and injustices.

Ursala Pankonin and Thomas Carlson are two educators from Minnesota with vastly different backgrounds and experiences. Pankonin is American Indian and black and for the last 16 years has taught middle school.

Carlson is white and queer and has taught high school language arts for 31 years. Both work within a 20-mile radius, are union members, and operate within similar circles.

They don’t know each other. However, they share one strong experience: they had no teachers of color during their formative years of schooling and that has shaped the work they do today around racial equity.

Why does this matter? Pankonin, whose school was on a reservation, explains, “The first time I remember feeling really irritated about not having teachers of color was in middle school. When we would do the history lesson, the settlers were portrayed as the heroes while Native Americans were portrayed as these aggressive savages. How awful, to be presented a story where we were the bad guys.”

“People act like all the changes in America were due to white people and they did all this good, and that’s just not the case. If teachers don’t know that, then [a false narrative] continues to get taught.” - Ursala Pankonin

Later down the road, Pankonin asked her high school teacher (who is white) why they didn’t read authors of color. Pankonin recalls her response: “Black people weren’t allowed to write because they weren’t allowed to learn how to read. It was dangerous for them so we don’t have anything.”

“I think she believed that,” Pankonin says. “Her exposure to authors of color was limited, and she could only teach me what she knew.”

A teenage Pankonin went out on her own and found authors of color who were writing in the time of slavery.

“Imagine what a powerful message that could have been for students that despite not being allowed to learn how to read or write, look at what they were doing—and doing well—this subversive action of strength and bravery,” she reflects.

“People act like all the changes in America were due to white people and they did all this good, and that’s just not the case. If teachers don’t know that, then [a false narrative] continues to get taught.”

Understanding Pankonin’s experience is important—not understanding it is detrimental to the success of all students.

According to an article in The Hechinger Report, national studies have long underscored how black teachers produce better academic and behavioral outcomes for black students compared to their white counterparts, thereby leading to calls for the recruitment of more black teachers and/or asking where all the black teachers have gone. This extends to Latino, American Indian, and other racial groups that also benefit from educators who share their identity. Missing from these reports is an explanation as to why white teachers are not producing the same results. Some of the thinking around this centers on implicit bias.

To alleviate this thinking, Pankonin and Carlson belong to different cohorts of an anti-racism program called Facing Inequities and Racism in Education (FIRE), developed by Education Minnesota and administered by the association’s professional development academy.

FIRED Up for Racial Justice

Like many states across the country, Minnesota has no formal, consistent professional development pathway for educators to enter and/or continue their journey of living equitably and in turn, authentically disrupt systems of racism and racial inequities in the classroom. In comes Education Minnesota.

The FIRE program leads and organizes Minnesota educators in a movement to live equitably and practice recognizing and responding to racial inequities and injustices.

This includes the Racial Equity Advocate program, plus a series of trainings (see box below) that help Minnesota educators develop an anti-racism mindset and learn how to interrupt and dismantle institutional racism.

The program appeals to educators for a variety of reasons. Carlson, for example, found a shocking lack of curiosity among most white people around race and was looking for a place where the perspectives of people of color were present, centered, and honored.

“In my circles, people of color weren’t in the room, and I found that, in ways, I could never be really educated around race, bias, and racial understanding and competence surrounded by white teachers.”

Meanwhile, Pankonin found a group of educators, specifically of color, who understood the issues, were building community, and pushed forward the work around race equity.

“That was appealing to me because sometimes when you don’t have many people around you who understand the situation or who aren’t seeing things that you’re seeing because their life experiences are different, you feel isolated.”

To learn more about the program, visit the Minnesota Educator Academy. For more information on racial, social, and economic justice in education, go to NEA EdJustice, where you’ll find great resources, such as NEA’s Racial Justice in Education Resource Guide,. Hear from NEA activists who have launched a series of video “primers” for anti-racist, white, educators. 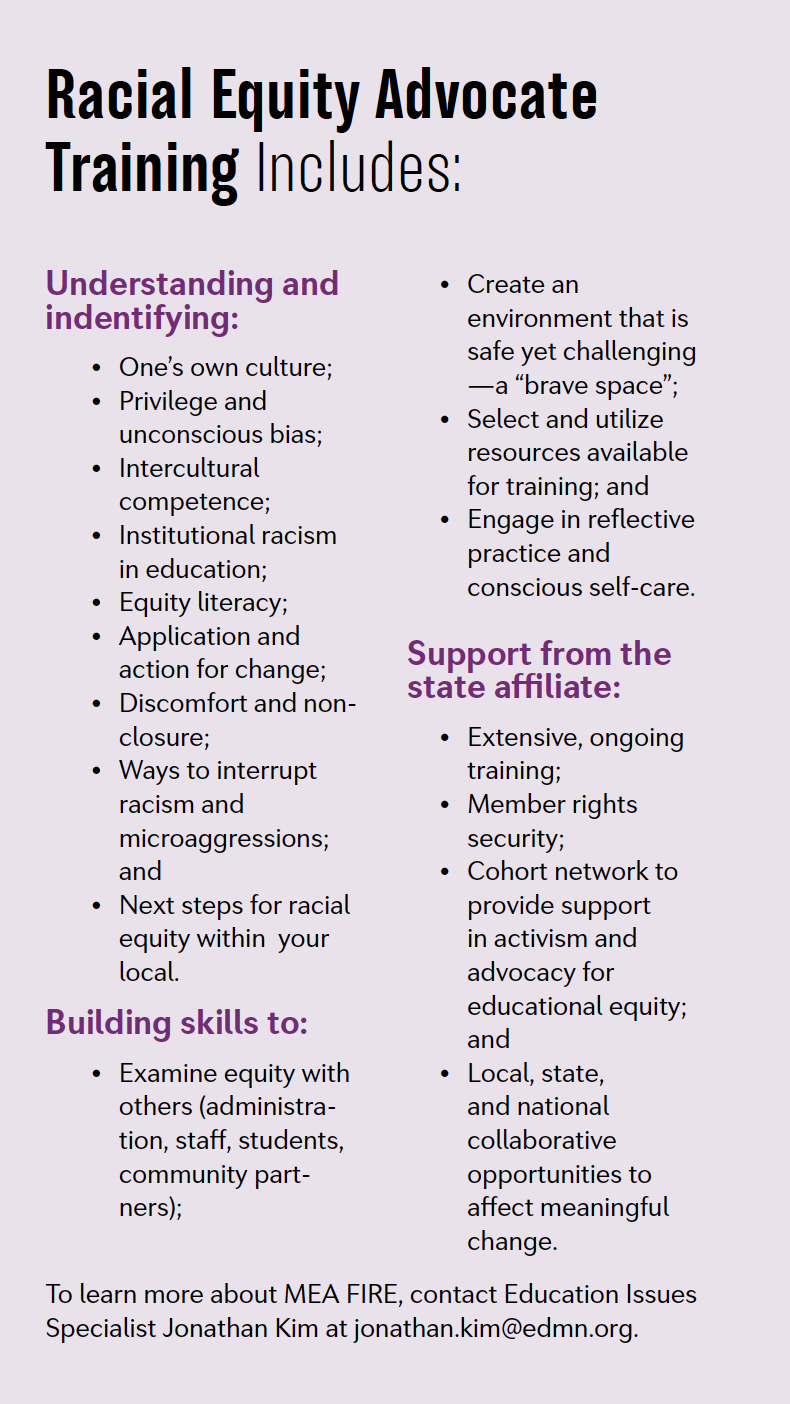