After Moving to a Four-Day School Week, There May Be No Going Back

Still a predominantly rural trend, four-day school weeks are now inching closer to cities and suburbs. Is the change still worth it?

The decision last year by School District 27J in Colorado to switch to a four-day school week wasn't just a case of yet another district taking this consequential and controversial step. Colorado, along with Oklahoma, Oregon, and Montana, has pioneered cutting a school day off the weekly schedule. Half of the state's districts currently operate on four-day weeks, most of them small and rural communities.

The move by 27J was significant because it's a suburban district northeast of Denver. Headquartered in Brighton, 27J serves 18,000 students. Around the same time,  Pueblo City Schools, an urban district about 90 miles south, also voted to adopt a four-day week.

While there's no disputing the growing number of districts taking this step, whether the four-day week makes further inroads into more metro-area districts remains to be seen.

Chopping Friday (or Monday) off the school schedule seems like a drastic step, so why are so many districts taking it? First and foremost, it's seen as a necessary cost-saving measure, although few districts expect a windfall.  According to to the National Commission of State Legislatures (NCSL), on average, savings ranges from 0.4 percent to 2.5 percent of a district's overall budget.

That's a little more than 1 percent of its annual operating budget. Still, for one of the most underfunded school systems in the Denver area, it was necessary, says Kathey Ruybal, president of the Brighton Education Association (BEA) - particularly after voters rejected a a $12 million bond that would have helped fund better teacher pay and resources for classrooms.

Ruybal was fed up with seeing good teachers come and go, some moving 30 miles west to better paying positions in Boulder. "We were desperate. We had to do something." (A 2017 BEA survey found that 60 percent of its members reported working a second job, with half doing so during the school year.)

Despite just modest savings from the shorter week, Ruybal believes the switch will prove worthwhile because it will attract more teachers to the district.

"The four-day week is freeing up more time for our teachers to help them professionally, and that's going to help our students." 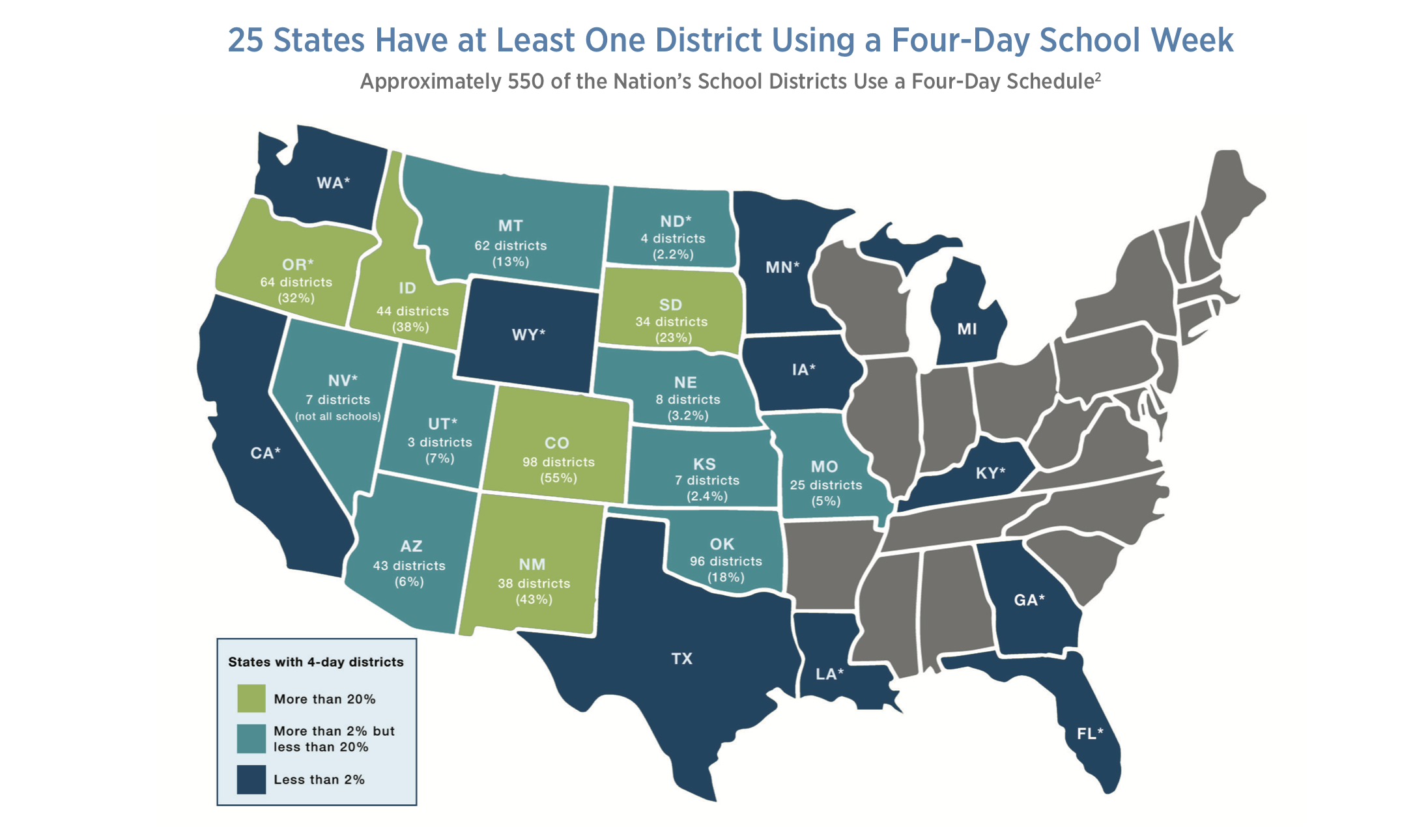 Since NEA Today first took a look at this issue back in early 2016, the number of districts moving to a four-day week has grown dramatically, from approximately 120 in 21 states to 560 in 25 states.

Typically, districts modify the week into four, longer days. In District 27J, the school day for middle and high schoolers now begins at 8:30 and ends at 4:32. Whereas most districts opt for Friday, the no-school day in 27J falls on a Monday.

Once a district has taken this step, it is unlikely to return - voluntarily at least - to a five-day week. That's not to say, however, that the supposed benefits of a four-day schedule aren't being re-evaluated.

For some lawmakers in Oklahoma, the proliferation of districts opting for four-day school weeks has harmed the state's workforce. Ninety-two of Oklahoma’s more than 500 school districts operate on shortened weeks. The legislature is currently considering a bill that would reinstate the requirement that school years be measured by days not hours.

The push has met with resistance from many district leaders, who have reported positive results in savings, teacher recruitment, and reduced student absenteeism. One superintendent said forcing schools to return to a five-day week was a curious preoccupation in a state that "has been starved of money, and teachers’ salaries have lagged behind every state in the union over the past decade."

In 2018, New Mexico lawmakers placed a moratorium on any further four-day scheduling until the long-term impact is a little clearer.

"We have to get a handle of it to see if it's something that we should allow all school districts to do, or if it is something that we need to put the brakes on," Senator Howie Morales told PBS Newshour. “How are the students performing? Is it really helping as far as financially in savings for the school district? What's going to happen in an economic development and a jobs perspective when parents may have to take Fridays off and care for their kids?”

While existing research has concluded that districts can expect only moderate savings from the switch, the impact on students is less clear. A 2015 study did show improved math scores among Colorado students on a four-day week, “suggesting there is little evidence that moving to a four-day week compromises student academic achievement,” the researchers wrote.

‘We're Trying To Make it Work’

When the idea of a four-day week was first floated in 27J, the Brighton Education Association surveyed its members on the proposal. The feedback was overwhelmingly positive. The new schedule, says Kathey Ruybal, “treats teachers as the professionals they are.”

Teachers are in the building an hour longer than the students at the secondary level and 90 minutes more at the elementary level. The days may be longer, but they provide educators with more time for collaboration and planning, embedding professional development into the school schedule.

Ninety miles south, educators in Pueblo are also welcoming the time the new schedule has freed up. The Pueblo Education Association (PEA) worked with the district on the details of the four-day week, a discussion that commenced only after a five-day strike in May 2018 by Pueblo educators for more funding was settled. 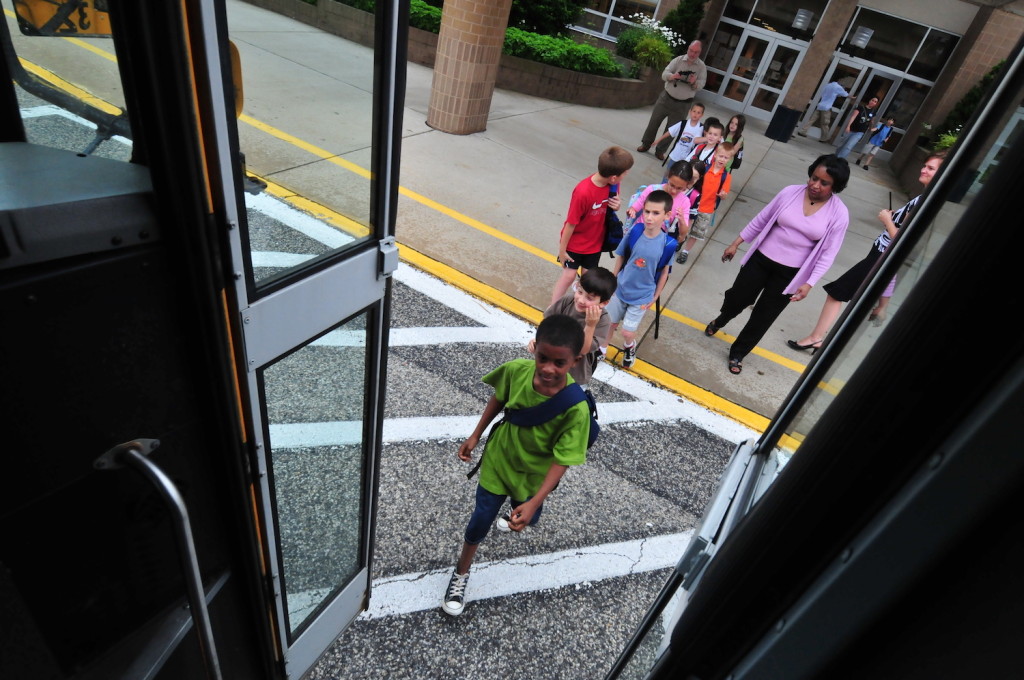 As four-day school weeks have proliferated, some experts are concerned that not enough is known about the impact on students and their families.

“We had been having discussions with the district about them wanting to move to the four-day week,” recalled PEA President Suzanne Etheredge. “But we didn’t commit to anything in writing until after the settlement from the strike.”

PEA worked on the details with district leaders to ensure the revised schedule would provide more time for professional development and support for Professional Learning Communities.

“One Friday a month is either a teacher workday or a professional development day,” explains Etheredge. “Quite a few teachers use Friday to get caught up on grading, planning, etc.”

Still, Etheredge adds, the strain on teachers with the longer workday hours was evident. By the end of the fall semester last year, “they were pretty tired.”

Most of Pueblo's students qualify for free-and-reduced lunch. The impact of a four-day week on them and their families, says Etheredge, is an overriding concern for educators.

If four-day weeks begins to gain traction in more urban districts like Pueblo, experts fear low-income families could bear the brunt of a change that is otherwise quite popular with educators and others in the community. Shortened weeks present child care challenges and makes it more difficult for many students to get nutritious meals.

“The district hasn’t done anything to really keep students occupied on the fifth day by itself,” said Etheredge. “But some of the community partner organizations - local libraries, YMCA, the Boys and Girls club - have worked with the district and also stepped up to run programs of their own on Fridays.” (District 27J offers daycare, including lunch, at most of its elementary schools on Mondays.)

Educators who are supportive of four-day weeks are aware obviously that the underlying problem is a broken school funding system.

“The inequity in our schools is infuriating,” says Kathey Ruybal. “But we can't stand by and watch good teachers leave our district. That’s hurting all our kids. This new schedule can help us but it has been a difficult adjustment. It's a multi-year process and we're trying to make it work.”