'All That Scrolling': How Screen Time Impacts Students

What do we know about the effect of screen time and social media on mental health and learning, and what can educators do to help? 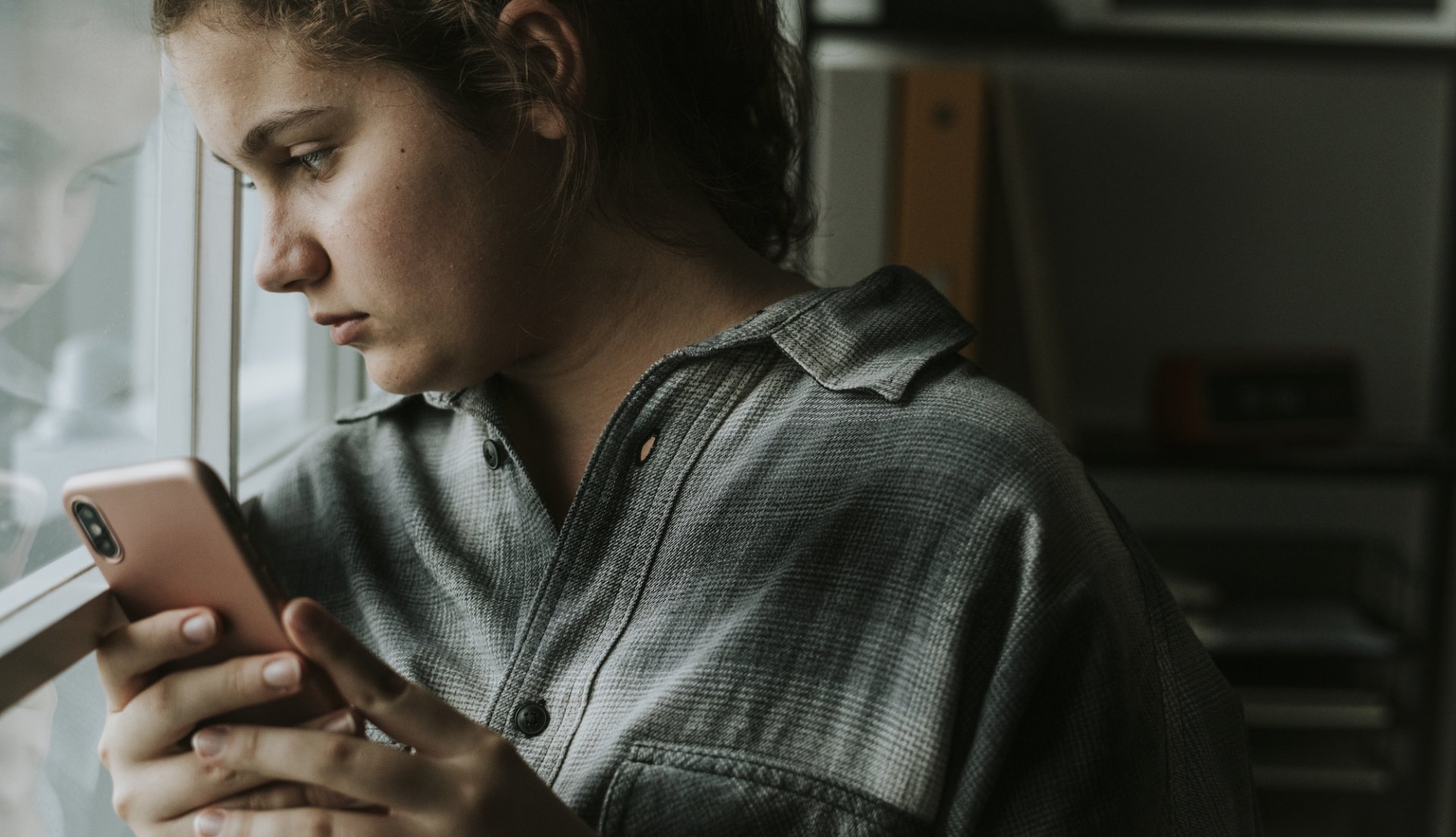 Social media's impact on the mental health of teenagers was in the news again recently with some disturbing findings concerning Instagram's younger users. According to a report in The Wall Street Journal, the immensely popular Facebook-owned platform surveyed users in 2020 and found that teenage girls were being harmed by their heavy Instagram use.

According to internal findings, "thirty-two percent of teen girls said that when they felt bad about their bodies, Instagram made them feel worse.” The report concluded that “we make body image issues worse for one in three teen girls."

That social media can be a magnet for social pressure, anxiety and bullying is no secret, but Facebook's acknowledgment that one its platforms was toxic for many teenagers is bringing new scrutiny to the often oversized presence of social media - and screen time in general - in young people's lives. In response, TikTok rolled out new mental health resources for its users, a move experts called welcome but overdue.

Screen time consists of wide-ranging content, although social media - Snapchat, Instagram, and TikTok especially - takes up a significantly large share of young people's time online. In 2019, Common Sense Media found that 8- to 12-year olds spend an average of almost five hours a day looking at screens on smartphones, tablets, gaming consoles, and TVs. For older kids, ages 13 to 17, that number climbed to 7 hours and 22 minutes.

The social isolation brought on by the COVID pandemic in 2020-21 has stoked considerable worry among educators and parents that the consequences of excessive screen may be magnified as the school year begins.

“I do think they’ll be more attached this school year,” says Shannon Guevarez, a fourth-grade teacher at South Hanover Elementary School, in Hershey, Pa. “My students are just automatically drawn to screens. It’s worrisome, because we really don’t know what the long-term impact is going to be. Their brains are still developing.”

We all feel it—that small rush or mini-high every time our phone emits that familiar ‘ding’ to alert us to a new text or a Facebook or Instagram post. That hit of dopamine in the brain releases feel-good chemicals into your body, which reinforces the behavior.

Eventually, this pattern can create an addiction. Like most addictions, it can be difficult to get through a day without feeding the habit. Adults usually have the cognitive and behavioral skills to manage or curb the effects of pervasive use of phones or other digital devices.

For teenagers and younger kids, however, it’s a different story. Their brains are, as Guevarez said, works-in-progress. Developmentally, many don’t have the tools to prevent the potential downsides of too much screen time.

Sam Ball is a math teacher in Winston-Salem, N.C. Now in his seventh year in the classroom, Ball is concerned about the effects of excessive screen time he sees in his students. “Many of them stay up very late, scrolling through their phones. They can get very stressed and very sleep-deprived. The addiction to the ‘ding' - it’s very powerful.”

Very powerful and very unique to this generation of young people, says Karla Freeman, a high school teacher in neighboring Davie County. “Kids probably see their parents or other adults being able to manage and strike a balance. But older generations can’t relate … as well because it’s been in teenagers’ lives so much. They didn’t go through that.”

While some children cope fine and manage the high and lows of social media interaction, many others are prone to the anxiety, stress, and depression that can, according to some surveys, stem from screen time.

“It’s all that scrolling. Social media is a highlight reel for these kids,” says Dr. Pamela Hurst-Della Pietra, president of Children and Screens, an organization that analyzes digital media’s impact on child development. “Social comparison, the pressure, the fear of missing out takes a hit on their self-esteem about their lives, their bodies, and their relationships.”

If young people balanced their use of social media with plenty of socializing in person,  experts agree, the effects for some wouldn’t be so severe. During most of the pandemic, this opportunity was curtailed significantly, and Twitter, Facebook, Instagram, Snapchat, and TikTok likely became even more embedded in their daily lives.

Six months into the pandemic, the Child Mind Institute and the California Partners Project conducted in-depth interviews with 46 high school students in California to gauge how they were coping with this social disruption. Specific questions centered around internet use, sleep, exercise, and their prevailing moods.

The results were released in a 2020 report called Are the Kids Alright? The pandemic underscored the extent to which many teens’ online life is their actual life, the report concluded.

“Teens check their apps for any new ‘news’ and then find themselves mindlessly scrolling, no longer engaged, but unable and unwilling to stop,” the authors wrote.

Still, the report also found that, “even as they say they suffer headaches, poor sleep, and exhaustion, teens feel the consequences of being ‘addicted’ to their phones and social media as too mild to matter or warrant a change in behavior.”

A Bridge to Interaction

Young people's more benign view of their digital media habits was also reflected in a 2019 Common Sense Media survey, which found teens are more likely to see social media as "a good thing in their emotional lives."

It's important to remember that during quarantine, screens were "an essential bridge to interaction," says Janine Domingues, a clinical psychologist in the Anxiety Disorders Center at the Child Mind Institute. “Social media was their outlet. This was how they stayed connected to friends.”

Carrie Suchy, a psychologist at the Franklin-Pierce School District in Washington, agrees.   and cautions that, due to a lack of comprehensive research, there is still much we do not know.

"While there are correlations of concern - increased depression and anxiety, for example - there is really no causal evidence that social media and screen time negatively impacts teenagers," Suchy explains. "Also, what we tend to see is that among the group where there is a correlation, these young people are also likely to seek resources and advice through these same online channels."

"We really don't have the answer yet," Suchy says. "But time will tell."

'I Can't Mitigate Their Use'

Still, the role for schools and educators is clear.

"We can't pretend that these devices and platforms don't exist. They're not going away. So we should continue to teach students how to use the Internet responsibly," says Suchy.

The reality is that this technology is and will be an integral part of students’ lives. And while the use of, for example, smartphones in the classroom is still generally prohibited, or at least restricted to a few key tasks, teachers regularly use screens in other forms.

While many experts, educators, and parents want to discourage excessive media use by students, technology is a useful tool in the classroom—when it’s interactive and truly educational, says Sam Ball.

“As much as I'm concerned about my students’ excessive use of online media, I can’t mitigate their use, at least not by myself," he explains. "What I can do is leverage their interest into a more educational and beneficial purpose.”

And while monitoring and curbing their students’ digital media consumption is not the responsibility of educators, Janine Domingues says, open lines of communication with parents are critical.

“Teachers are going to see how their students have been affected as the school year begins,” she explains. “So there is a role to play in keeping parents informed and working with them. It has to be a collaboration.”

Educators can play an important role in preventing digital media from overtaking child development, says Hurst-Della Pietra and educators should encourage students to express their anxiety. “Screens are not good coping mechanisms, and students’ ability to express themselves openly can be hampered. So listening to their concerns can really help students,” she says.

It’s just as important, Hurst-Della Pietra adds, to continue to raise parents’ awareness about the implications of excessive screen time.

Given that students are so attached to digital media, Shannon Guevarez doesn’t hesitate to impose a moderate “no screen” rule in her fourth-grade classroom.

During academic free time in her class, Guevarez steers students away from the computer. “I will take that choice away because they need a break from screens,” she says. “They can read, color, or draw. Do something else.”  Guevarez also has conversations with her students about screen time and what rules, if any, they abide by.

Guevarez believes that the constant flood of new platforms and devices marketed to school districts is feeding the perception among students that technology should rule their lives—inside and outside the classroom. “Just because it’s new and cool, doesn’t mean you need to implement it in your classroom,” she says. “Using technology is a balancing act and teachers have to be intentional and deliberate in exploring how these technologies help students learn."

"We wouldn't be doing our jobs as educators if we just decided to arbitrarily scale back the use of screens in the classroom. Technology is a beautiful supplemental tool. It shouldn’t rule us in society, and that’s how it should be modeled by us to our students. Otherwise, if they think it’s the be-all and end-all for learning, then they’ll think it should be the be-all and end-all in their lives."