Arming Teachers is Not the Answer

The idea that we can reduce gun violence in schools by bringing even more guns into schools is ludicrous and dangerous. Educators, parents and students are demanding common sense solutions that will actually save lives. 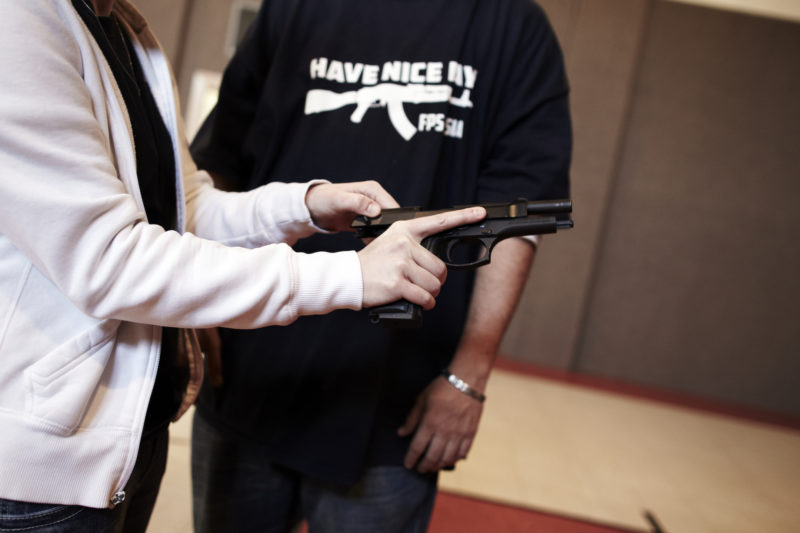 Only two weeks after the shooting at Marjory Stoneman Douglas High School, where 17 students and educators were murdered, Florida lawmakers rejected a ban on assault rifles and decided instead to heed President Trump's call to put even more weapons in our schools. A bill is moving through the state legislature that would train teachers to carry guns. It allocates $67 million to create so-called "school marshalls," staff trained to carry a concealed weapon on school grounds.

The bill would put 10 armed educators in every school, roughly 37,000 statewide.

For the students, educators, and parents still reeling from the massacre in Parkland (just the latest in a rash of school shootings that has spread across the U.S.), the notion that combating gun violence in schools requires even more guns being brought into schools is both ludicrous and dangerous.

Alexis Underwood, president of the Association of Bay County Educators and a retired Marine, calls arming teachers "a horrible idea."

"One of the things that my drill instructor told me is that even individuals in the military, in a moment of crisis, when the gun fires for real, are going to forget what they've been taught to do and they're going to run or they're going to make stupid mistakes," Underwood told a local Florida TV station last week. The priority, Underwood added, should be funding highly trained school resource officers.

Most law enforcement experts agree that school staff should not carry guns because they lack the tactical knowledge of handling weapons that trained law enforcement personnel receive on a regular basis. Even if the funding for the weapons and training were to be available after massive cuts to education budgets, educators carrying concealed weapons pose too high a risk to school safety.

We owe it to the students and school personnel, who’ve lost their lives at schools and on campuses across the country, to work together so that we can thoughtfully and carefully develop common sense solutions that really will save lives. #NeverAgain #MSDStrong

“You don’t want to have a gun that’s available to a student or another worker who may have mental health issues,” Maureen S. Rush, vice president for public safety and superintendent of the Police Department at the University of Pennsylvania, told the New York Times.

Parents and educators overwhelmingly reject the idea of arming teachers and other school staff, said NEA President Lily Eskelsen García. "Bringing more guns into our schools does nothing to protect our students and educators from gun violence. Our students need more books, art and music programs, nurses and school counselors; they do not need more guns in their classrooms," she said.

NEA Vice-President Becky Pringle shudders at the thought of how a school's learning environment would be transformed by the presence of educators walking around carrying concealed weapons.

“I taught eighth grade science for over 30 years,” she said. “I can’t imagine being in an environment where guns are all around me. What’s being described by the president and others sounds more like a prison to me, with the teachers as armed guards and students as prisoners.”

With that many weapons in a school, Pringle says, there will be more accidents, more fatalities, and more fear.

More importantly, educators themselves do not want to be armed in their classrooms. Over the past couple of weeks, teachers and education support professionals have taken to social media in droves to send a message to the Trump administration and pro-gun advocates that arming educators is an unacceptable response.

Melissa Falkowski, who survived the mass shooting at Marjory Stoneman Douglas High School, says the logistics of arming teachers makes no sense. A shooting like the one in Parkland, Florida, happens in less than three minutes, she says, and “having a gun that would have to be secured and locked somewhere in a closet and then having to go for that gun and then having to use that against a shooter, it makes no logical sense.”

Arming teachers is an idea that comes from people outside of the classroom, she says, and urges lawmakers to listen to what educators are saying.

"If you have never worked in a school or qualified with a firearm please stop advocating that teachers should be armed," Dan Staples, a mathematics teacher who served in the U.S. Marine Corps posted on Facebook. "First, most of my colleagues have zero interest in carrying. Second, there is a much greater chance of having a negligent discharge or a misplaced weapon or a bad guy getting hold of that weapon than there is of that teacher using it to neutralize a threat.”

“I'm a teacher and a gun owner with a concealed and carry permit, and I'd never want to bring a gun to my classroom,” tweeted Benjamin Gorman, a high school English teacher. “My kids need to feel safe, and I should be thinking about content and not worrying about someone grabbing my pistol. Arming teachers is a gun manufacturer's solution.”

High school French teacher Margaret Kieler tweeted, “My job is to connect with kids and teach them a language. No shooting required.”

Students, who have become leaders in the new push for common sense gun laws, are also outraged.

Keep the Focus Where it Belongs

Armed educators are already roaming the hallways in schools in nine states, most notably in Texas. In addition to the bill being debated in Florida, lawmakers in other states are gearing up to introduce similar legislation. While educators should be mobilizing against these proposals, Eskeslen García urges lawmakers to refocus their efforts on common sense measures "that will really save lives."

With #ArmMeWith, teachers are asking to be armed — but not with guns pic.twitter.com/29fQdBc285

Public support for these types of solutions has surged to its highest level in 25 years, according to a recent Politico/Morning Consult poll. Overwhelming majorities back measures such as banning assault weapons and instituting background checks on all gun sales. And the sight of Parkland students leading massive protests has reenergized the movement to change gun laws.

As Washington Post columnist Eugene Robinson wrote on Feb. 26, the gun lobby is spooked and would be more than happy to keep the public debate on guns focused squarely on arming educators.

"The deliberately outrageous idea of arming classroom teachers is nothing more than a distraction," Robinson said. "A ploy by the gun lobby to buy time for passions to cool. Don’t get sidetracked."