Kids need to see themselves on the page, says award-winning author of children's literature. 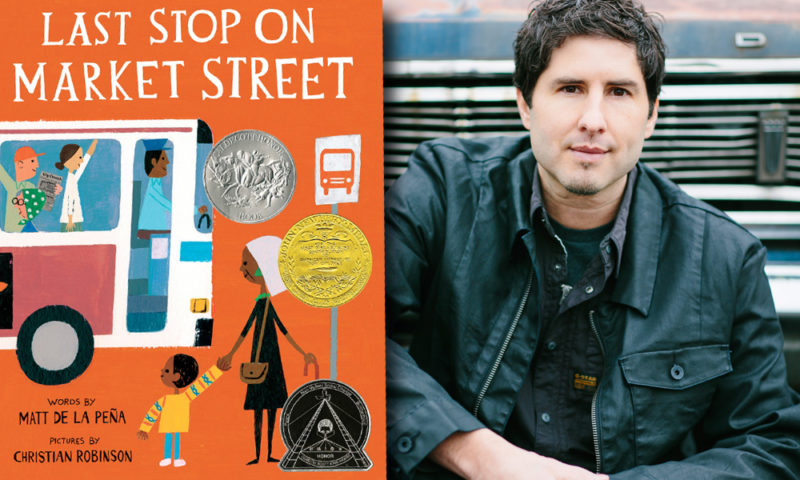 Matt de la Peña was a racially confused, working class kid who grew up to write books about racially confused, working class kids, but the universality and humanity of his characters will speak to young readers from any background. De la Peña is the first Hispanic winner of the 2016 Newbery Medal for his picture book Last Stop on Market Street, the author of several award-winning Young Adult (YA) novels, and this summer was honored with the National Council of Teachers of English Intellectual Freedom Award for his work to stand up to censorship after his YA novel Mexican WhiteBoy was banned from Tucson, Arizona, schools (along with several other Hispanic authors) when they terminated the district’s Mexican American Studies programs.

NEA Today spoke with de la Peña about what motivates his writing and inspires his characters.

What parts of you appear in your characters?

Matt de la Peña: I steal from myself all the time. I think my own racial confusion is always present. And the guilt I feel about not being as Mexican as my uncles and cousins. I found grace in a sport [basketball] when I was young, and I explore that idea a lot. But the part of me I mine the most is the pride I've always felt about growing up working class.

It seems we’ve finally entered an era where diverse books are sought out and celebrated. Why is that important?

MDLP: I do sense that things are changing. "Diverse books" are getting a little more attention from both consumers and award committees. But the most vital change is happening before the book even exists. Publishers seem to be making a concerted effort to highlight diverse titles. They're even putting money behind them in some cases. It's important for diverse reader, of course, but it's also important for the viability of the book business. The country is changing. The demographics are shifting. We better get out in front of this shift is we want our business to remain viable. Otherwise smart young "diverse" readers and writers will take their interests elsewhere, as they should.

What do you hope to contribute to the diverse books movement and ultimately to your readers?

MDLP: To be honest, I don't come at it with a thought-out plan. When I sit down to write every new book, I'm focused on the same thing. I'm trying to explore some idea that personally interests me using characters that speak to me. I'm really interested in the mixed-race experience (as I'm mixed race myself). And I'm fascinated by working class stories (as I'm from a working class world). It's only after the book comes out, and I get a sense of the response, that I begin to understand the work's possible contribution. Mostly I just adore telling stories, and it just so happens that the stories I gravitate toward are relevant to readers who don't often see themselves in books.

How can reading – especially books with diverse characters – transform the lives of young people?

MDLP: If you're growing up in a homogenous, white neighborhood, exposure to diverse books is absolutely vital. Otherwise you won't know anything about those who are different. And if you're a diverse reader, it's incredibly empowering to see yourself as the hero in a book. Nothing can replace the unspoken validation a kid feels when they see themselves on the page. It confirms existence.

How can educators use diverse literature to get more kids writing and expressing themselves?

MDLP: I know so many writers who start out by imitating a favorite work. My first writings were basically attempts to re-write The House on Mango Street. So when you put a diverse title into the hands of diverse kid you are saying, "Your story is relevant and important and worthy." This may embolden a young creative type to tell his or her story.

it's incredibly empowering to see yourself as the hero in a book. Nothing can replace the unspoken validation a kid feels when they see themselves on the page. It confirms existence.

What were your favorite books as a young person and what are you reading now?

MDLP: The only book I read all the way through in high school was The House on Mango Street, which I read a dozen times. In college I fell for Alice Walker and Toni Morrison and Zora Neale Hurston. And then I found Latino lit, and I knew I'd be a reader for life. Junot Diaz's Drown made me dream of being a writer. I still love diverse authors, but I've added other folks to the current rotation, like Cormac McCarthy and Philip Roth and Saul Bellow and Jennifer Egan.

You write both young adult and picture books – do you have a preference? What are their similarities and differences?

MDLP: I adore young adult novels. That form feels so natural to me. But I love picture books, too, because I look at my part of the collaboration as a spoken word poem. I write a spoken word piece that an illustrator then fleshes out and makes better. That process is incredibly inspiring. My first instinct is YA, but I'm so thankful that I get to write picture books here and there.

Where did the idea from Last Stop on Market Street come from? What do you hope young readers and those who read the story to them will gain from the book?

MDLP: The story began with a picture on [illustrator] Christian Robinson's blog. Back before we ever met, before he had even signed with an agent. It was a picture of him on the bus with his grandma. I was really inspired by that image. And there was a story I'd been wanting to tell about gratitude and learning to love oneself that just wasn't working as a YA book. And when I began writing it as a poem, the whole thing just clicked. I hope readers will try on the idea that we have a choice about how we view our worlds. Yes, there are ugly things out there, but there is also incredible beauty. We decide what we want to see.

Are you working on anything now that we can tell our readers about?

MDLP: I just finished two picture books. One is called Carmela Full of Wishes. The other is called Love. I'm really excited to see these stories in the world. I also have a YA novel coming out in the next year called One of Those Lights Used to Love Me, which explores the guilt some working class kids feel about succeeding.