Be Your Students’ Hero, Teacher of the Year Tells RA Delegates

"When students look at us they see role models and someone they can be proud of," says Connecticut educator Jahana Hayes. 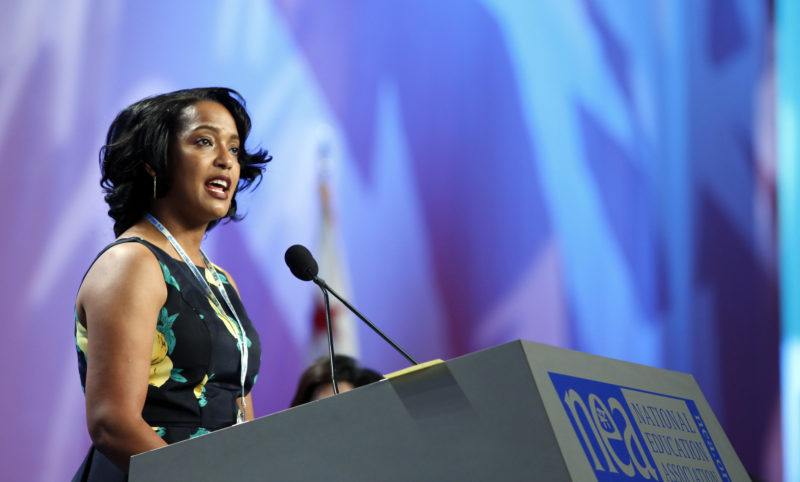 In a stirring and emotional speech to the NEA Representative Assembly (RA) on Thursday, 2016 National Teacher of the Year Jahana Hayes urged her colleagues to never underestimate their potential to transform the lives of their students. If her teachers had given up on her, Hayes told the delegates in the Washington D.C. Convention Center, she would not be been standing before them as teacher of the year.

"I was oblivious to opportunities that existed outside of the projects where I grew up, but my teachers vicariously ignited a passion in me," Hayes recalled.  "Despite being surrounded by abject poverty, drugs and violence, my teachers made me believe that I was college material and planted a seed of hope."

"I identify with my students because I am my students and I know what it feels like when every statistic and everything around you is an indicator or a predictor of failure," Hayes said.

Hayes teaches history at John F. Kennedy High School in Waterbury, Conn. She was named National Teacher of the Year in April by the Council of School State Officers and was honored by President Obama at the White House.  As teacher of the year, Hayes will spend a year traveling the nation to represent educators and advocate on behalf of public education.

A member of the Connecticut Education Association and the Waterbury Teachers Association, Hayes thanked the union for keeping her "grounded" and making sure her devotion and commitment to her students is never exploited.

I know that for many of my students I am their only hope. It is those times when I am transformed into an advisor, counselor, confidant and protector I have made the commitment to help my students in the same way my teachers helped me.

"As a teacher I am so emotionally invested in the success of my students that I sometimes forget that I deserve the respect and dignity of being a professional," Hayes told the delegates.  "[My union] ensures that I am treated like the professional that I am and my creativity is not stifled by mandates. My union advocates on my behalf and creates a structure that protects me from myself."

But don't ever expect Hayes to stay confined by the boundaries of "traditional teaching responsibilites."

"I know that for many of my students I am their only hope," she said. "It is those times when I am transformed into an advisor, counselor, confidant and protector I have made the commitment to help my students in the same way my teachers helped me."

The academic success of students, especially those in urban public school districts like Waterbury, requires this level of engagement and dedication, Hayes told the delegates.

It's about meeting struggling students where they are, she added, and not letting where they should be become a box to put them in. Academic success for many of these students may be unreachable unless they know that their teachers care.

Hayes closed her speech by reminding the delegates that they are not mere "visitors" in their students' lives.

"Continue growing, guiding and loving your students because you may have the next president, supreme court justice, doctor, lawyer, business owner, performer, volunteer, activist, or national teacher of the year sitting in your classroom."