Throughout 2019, she continued to prove that she was a disastrous choice for education secretary. 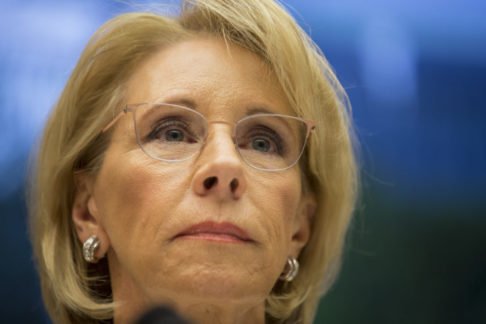 In 2019, educators across the country stood up for their students, their schools, and their communities, to call out the funding cuts and harmful legislation proposed by Education Secretary Betsy DeVos.

Betsy DeVos has a long history of turning her back on public schools. As secretary of education with the backing of President Trump, DeVos has proposed schemes to privatize public schools through vouchers, called for deep cuts to federal education funding, rolled back protections for vulnerable children, and shilled for the for-profit college industry that has defrauded countless students.

Throughout 2019, she continued to prove that she was a disastrous choice for education secretary, just as public school supporters knew she would be.

Educators and allies will continue to speak out against Sec. DeVos and her anti-public education agenda. Here are the worst moves she made in 2019:

1. Secretary DeVos failed to enforce the civil rights of all students

Nearly half of all LGBTQ+ students live in states where they are not protected from discrimination or bullying. They could turn to federal legislation, but Betsy DeVos stripped their Title IX protections and refused to discuss the high rates of suicide among transgender students.

DeVos’s changes to Title IX protections have a chilling effect on students’ interests in filing complaints, which are already underreported, and harms the capacity of those students to have a healthy learning environment. Only 1.8 percent of students who file complaints today see any action. Prior to 2016, 15.6 percent of students could expect a change to occur if they sought to report harassment or discrimination. NEA President Lily Eskelsen García says Secretary DeVos’ changes “deny schools the flexibility and incentives to prevent and address harassment early in age-appropriate ways.”

At the 72nd Education Writers Association Conference in Baltimore, DeVos took potshots at educators while she talked up her anti-public education agenda. She also accused educators of “hurting kids” when they marched for investments to improve schools and admonished educators for rallying behind the #RedforEd banner around the country, saying they should have “adult disagreements on adult time.”

Later in the year, during a visit to a South Carolina pharmaceuticals plant, to promote workforce development, DeVos fails to acknowledge that the 650 educators employed there had taken on a second job to make ends meet. South Carolina ranks 40th in the nation in educator pay and the many educators who take on second and even third jobs to stay afloat helped fuel the #RedforEd protests in Columbia in May.

3. DeVos proposed massive cuts to the Dept. of Ed

The Trump Administration budget, with the full support of education secretary Betsy DeVos, zeroed out the community schools program for FY20, while requesting more than $40 million for charter schools. It proposed to cut $5 billion from public schools, eliminate the Unified Champion Schools program, and cut the Department of Education budget by 10 percent. DeVos took it even further, asking for no increases in the tragically underfunded Individuals with Disabilities Education Act (IDEA). She failed to justify her claim that “students may be better served by being in larger classes.” And, pressed by Rep. Jahana Hayes, a former National Teacher of the Year, she declined to say that she would prevent the use of federal education money to arm and train teachers.

Starting with her proposal to cut funding for the Special Olympics and Unified Champion Schools program, which creates opportunities for students with and without intellectual disabilities to play sports together at school, DeVos took every action she could to harm students in need of extra support. Early in the year, she delayed an Obama-era rule that protects minority students in special education. A judge ruled against the secretary’s proposal, calling her attempted delay “arbitrary and capricious.”

DeVos has a brazen scheme to invest $50 billion in private school vouchers over the next 10 years. But support for her voucher bill faded quickly. During a meeting with educators, she claimed that tax credit programs such as her $5 billion “Education Freedom Scholarship” proposal are not voucher plans and that the proposal “is not going to take anything away from anyone or anywhere.” That is simply false. Tax credit vouchers will drain public funding from public schools. Later, she teamed up with Kellyanne Conway, a counselor to President Trump, to rally support for the scholarship, which would cut from public schools to fund private and religious schools. “Betsy DeVos and Kellyanne Conway are probably the two least-qualified people in America to talk about how to best help students succeed,” said NEA President Lily Eskelsen García.

6. DeVos attempts to roll back protections for online students

Educators have pushed back at every step DeVos has taken against their students. In May, NEA and the California Teachers Association won a lawsuit against DeVos. The ruling required her to implement much-needed protections for U.S. students in online college programs. In October, she was held in contempt of court for violating an earlier order to stop collecting loan payments from students defrauded by for-profit college conglomerate Corinthian Colleges, Inc.