"Suspect Red" by L.M. Elliott helps students understand how the paranoia and xenophobia of the McCarthy era remains relevant today. 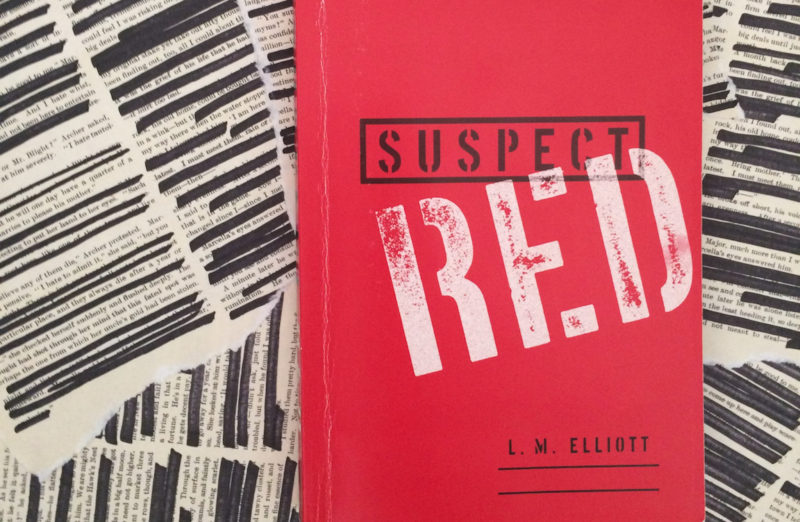 L.M. Elliott is a former Washington journalist turned novelist who recently published Suspect Red [Disney-Hyperion], a young-adult work of historical fiction set in a time of national paranoia and xenophobia. (No, not 2017!) The year is 1953, during the nation’s Second Red Scare, when thousands of Americans were accused of being communists, Elliott’s story is told through the eyes of two teenage boys, Richard and Vladimir. Recently, Elliott sat down with NEA Today to talk about the book and how the lessons of McCarthyism are relevant to today’s middle schoolers.

Rumors play a big part in the book. We see them feeding McCarthyism and the blacklisting of artists and State Department employees in a very damaging way. But rumors also are very common in middle school…

L.M. Elliott: Yes! I originally started the book after the Boston Marathon bombing. There [was] lots of conversation and legitimate debate at that point about people’s rights to privacy versus national security. But, as I was researching McCarthyism, and its paranoia, its pack mentality, and the whole thing about labeling people [as patriots or Communists], I thought—oh my god, it’s like middle school took over the world! It’s really horrifying, that kind of guilt by association, accepting innuendo as fact, being afraid to disagree with whoever is king of the hill. That McCarthyism attitude is the kind of attitude that middle schoolers, sadly, contend with all the time, even as they try to form their own sense of ethics and strength and individuality. The more I researched, the more I realized what a good topic it is for seventh through tenth graders.

Another theme in the book is heroism. How do you hope readers will define heroism?

I’m very interested in the heroism of ordinary people who stand up for what they believe in. Frankly, it’s that kind of heroism that changes the world. For a kid to say to a bully at their school, ‘I don’t believe in that. I don’t agree with that,’ that’s more courageous to me than the antics of a fictional 007 character. Today, that means saying, ‘I don’t believe,’ and I’m quoting Trump here, ‘that Mexicans are rapists and responsible for all crime.’ There is so much fear-mongering language being thrown around. It’s easy to get swept up in that paranoia. It takes real courage to stand up and question the mindset of our leaders, whether it’s your best friend or the president.

There are clear connections between the hate speech and fear-mongering of the Hoover and McCarthy days and today’s Islamophobia and anti-immigrant rhetoric. Do you think these could be useful connections for educators?

I recently was talking to students in Wilmington, N.C., and they went right to the heart of it. One said to me that ‘Muslim is the new Red.’ It was a brave statement. Part of the reason McCarthy gained such speed and traction, as did Trump, was that there had been terrifying events that preceded them. With McCarthyism, you’ve got the Iron Curtain, the hydrogen bomb, the start of the Korean War, the discovery of atomic spies within our borders. These things primed the country to be afraid, and McCarthy was very good at exploiting it. You’ve got the same thing with Trump—9/11, various terrorist attacks, and an underlying fear that he can exploit with conspiracy theories and fear mongering. The similarities are endless. McCarthy was the king of deflecting criticism by attacking the questioner. We see exactly that today with Trump and ‘fake news.’

What I think it makes clear is that our responsibility, as human beings, is to ground our opinions and actions in our personal experiences, our personal research, and personal thoughts—and not to judge the all by the few. I applaud what I see so many educators do in telling and teaching their students to verify facts themselves. I hope it also can be a springboard for discussions around our First and Fifth amendment rights, the power and importance of petitions, and the potency of well-positioned, peaceful protests by students.

The two main characters, Richard and Vladimir, are cool kids who love books, and they avidly read and share some of the best books of the mid-20th century. Do you have any favorites that you slipped into their hands?

Robin Hood is a favorite of mine. I love that book, and had the illustrated copy as a child. When I learned it had been banned…it’s ridiculous territory! Fahrenheit 451 is a wonderful, eye-opening book. I also happen to love Steinbeck. I think he so humanizes and ennobles the quote-unquote “common man,” the people who are just trying to survive, and he does it with such poeticism. The fact that Of Mice and Men could be banned across the country takes my breath away.