Feb. 4-8 is Black Lives Matter At School Week of Action. 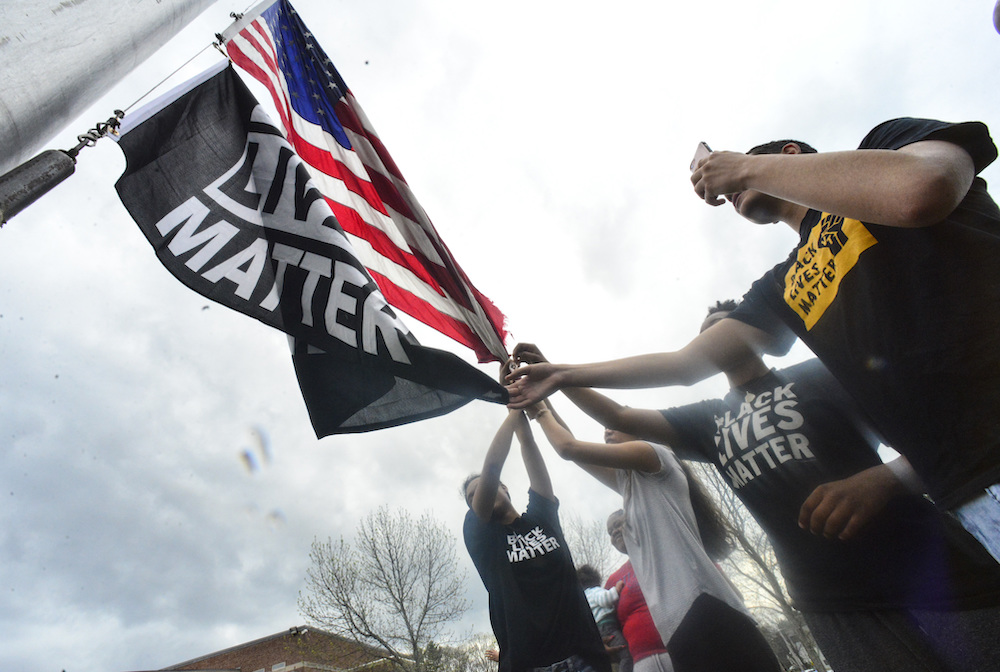 Jesse Hagopian is an ethnic studies teacher at Garfield High School in Seattle and a member of the Seattle Education Association (SEA)/Washington Education Association (WEA). As co-editor of Teaching for Black Lives, he helped organize Black Lives Matter at School (BLM at School), a national coalition of educators organizing for racial justice in education. Coalition leaders have encouraged educators, students, parents, union members, community leaders and others to join their annual “week of action,” this year set for February 4-8.

Hagopian explains the beginnings, objectives, and ever-widening scope of BLM at School.

When did Black Lives Matter at School start?

JH: October 19, 2016, marked our formal beginning when thousands of educators arrived at John Muir Elementary School here in Seattle wearing shirts that read, “Black Lives Matter: We Stand Together.” Hundreds of families and students too. Many of the shirts also included the message “#SayHerName,” a campaign to raise awareness about the state of violence and assault against women in the U.S.

What role did educators play during the movement’s early stages?

JH:  Teachers, education support professionals (ESP), and community members came together in solidarity. It was educators at the school, along with a group called Black Men United to Change the Narrative, who expressed an interest in organizing an event to celebrate black students early that school year. An art teacher, Julie Trout, designed a beautiful shirt that said “Black Lives Matter, We Stand Together.” When white nationalists found out about these activities, they sent hate mail to the school. One hateful person made a bomb threat on the school.

How were SEA members involved?

JH:  Way before our day of action (October 19), several members of SEA’s social justice caucus, which we call Social Equity Educators, met with educators at John Muir about the event. At SEA, we passed a resolution in support of this day of action, but we weren’t sure if people would really follow through and take action on October 19. Then the T-shirt orders started coming in, first by the hundreds and then the thousands. We ended up with somewhere around 3,000 educators in Seattle out of 5,000 who went to their schools wearing shirts that said “Black Lives Matter.” Many educators taught lessons about institutional racism that day. What’s incredible is that educators in Rochester, N.Y., and Philadelphia saw what we had done and organized their own BLM at School actions independent of us. Philly educators were the first to expand the day of action to a whole week of action.

That must have made you very proud.

JH:  Yes. We began coordinating with them in 2017 to have a national Black Lives Matter at School Week. Word got around. Last year, thousands of teachers in 20 cities across the country participated in the week of action.

How do leaders and activists in different states coordinate events related to BLM at Schools?

JH:  We communicate and organize around monthly national conference calls that anyone who supports the mission and goals of the movement can join. Through elections, we identified a steering committee that helps organize various activities and agendas for other various committees that have been formed. We have a curriculum committee, and a student creative challenge committee that helps kids create art that can inspire people to join this movement. We have a media committee, an outreach committee. It’s being organized predominantly by educators and some parents around the country who are doing this for free and with no budget.

How is NEA involved?

JH:  We got NEA to vote to support BLM at School week. Many different union locals are also passing resolutions and debating these issues out city by city. There’s a tremendous amount of power in bringing together social issues and anti-racist movements with the power of labor. We’re beginning to see the red state teachers’ revolt move into blue states. I think NEA's ability to bring in issues of over-policing of black and brown kids into the message about fighting for funding and teacher pay will help them be successful in winning that strike and transforming public education. (NOTE: NEA has curated and developed resources helpful to educators. For more, click EdJustice [email protected]. Also, see [email protected] U.S. map showing details on school events near you.) 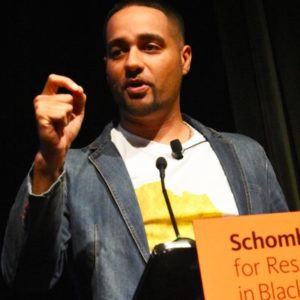 What’s behind the new "demand" item this year: Fund Counselors Not Cops?

JH:  In 2018, various groups coalesced as a national movement. We identified three demands: End zero-tolerance discipline and replace it with restorative justice; hire more black teachers and offer black history and ethnic studies in the schools. In addition, we broke down the guiding principles of the BLM Global Network into teaching points for each day of the week. This year, we added a fourth demand, which is “fund counselors not cops.”

The demand is a response to the growing movement in this country introduced by a group called, Dignity in Schools. There are numerous examples over the last couple of years of brutality that some police bring into our schools. Recently, the ACLU won a settlement for third graders in Kentucky who were handcuffed by police officers … not around the wrists because their wrists were too small but instead around the biceps. These were special needs kids, Latino and black, who were having some trouble. Instead of getting help, they were further traumatized. We are now in a situation in America where there are 1.6 million children who go to a school that doesn’t have a counselor but that does have a police officer.

NEA: What are you hoping to accomplish regarding this year’s week of action?

JH:  We hope to engage tens of thousands of students across the country in lessons that illuminate the 13 principles of the BLM movement. In addition, we hope to help transform unions so they see how much more powerful our movements can be if we challenge anti-black racism head on, and bring in black struggle and incorporate it into the union struggle. With that in mind, one of the new features this year is that we’re calling on educators, students, parents and community members to hold rallies in their cities on Wednesday (6th), or a day that makes sense for their local, at their school board building or city hall. We are asking for support of our four demands. We hope that this direct action and rally will pressure school districts to make the reforms that are so desperately needed. 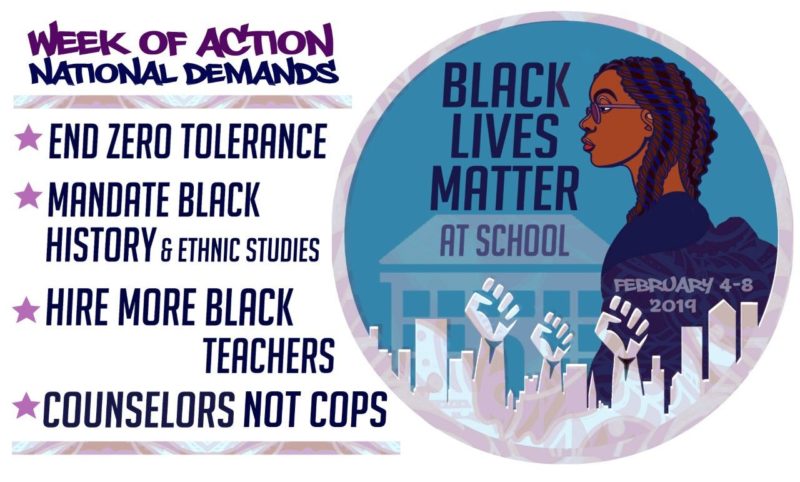 National Demands for BLM in School Week of Action

End Zero Tolerance. Focus our Schools on Restorative Justice
The over-policing, out of control suspensions, and expulsions must be brought to an immediate end. To rebuild our structures, we will focus our resources on restorative justice-the organic appointment of community leaders; mediation and processing; and equitable perspectives on rehabilitation. Ending zero tolerance and focusing our schools around restorative justice will honor an autonomous voice and vision for students, staff and faculty.

Black History/Ethnic Studies Mandated K-12
A classroom is incomplete if there is only one history taught to its students. The exclusion of Black History and Ethnic studies curriculum must end. Our students of color deserve to feel empowered in the classroom, by seeing themselves in the curriculum and reading materials. Black History and Ethnic Studies must be included in K-12 classrooms.
Fund Counselors Not Cops
This demand is simple: children need counselors not cops. Schools today spend an enormous amount of their financial resources hiring school resource officers and local police officers. These same schools often lack enough counselors for students to receive the support they need. The reality is our schools need counselors for children. The amount of racial trauma and adverse childhood experiences Black students experience continues to increase. We demand that schools provide counselors who have manageable caseloads that allow them to provide quality service to all students.