Faculty association stands up for member vilified by right-wing forces "mobilizing against truth, learning, and the university." 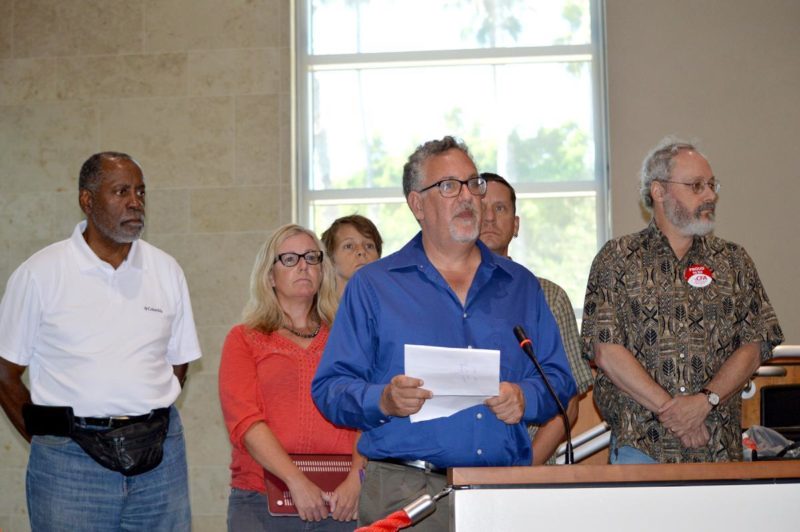 A Cal State Fullerton lecturer will return to his job this fall after his union, the California Faculty Association (CFA), laid bare the false accusations made against him by a right-wing student group. His return to the classroom marks a victory for faculty’s rights to academic freedom and free speech, CFA leaders said.

“Make no mistake, CFA will stridently defend our faculty who are under attack by forces who have contempt for the university and for free inquiry,” CFA President Jennifer Eagan told Cal State University trustees last week. “Our successful defense of Dr. Canin speaks to CFA’s commitment to protecting all members of the campus community from the new wave of attacks on academic freedom and free speech…”

Eric Canin, a 20-year instructor of anthropology at Fullerton, had been accused of hitting a student and interfering with the free speech of students during a Campus Republicans counter protest in February. But Canin denied it, and videos taken at the event did not show the alleged assault. (One photo showed Canin in a headlock by a student.) Still, he was quickly vilified on right-wing blogs, which called for his firing.

“When the incident happened, nobody really stopped, especially the students, to ask themselves whether what they said happened actually happened,” Canin told Inside Higher Ed. “The College Republicans put it online, and soon Breitbart had it and The Washington Times and other right-wing media, without a shred of evidence. It’s a simple yet sophisticated use of media … and this is not an isolated incident.”

Fullerton fired Canin after a short investigation, which CFA quickly challenged. The case was assigned an independent arbitrator, who ruled last week that the evidence showed Canin “did not engage in anything resembling a fight and did not have any conscious intent to cause any harm to the students in question.” It is possible, she wrote, that Canin grabbed a protester’s sign—a charge that Canin denies.

The Front Lines of Free Speech

That the “alternative fact,” as Canin calls it, was so quickly accepted and disseminated is not so surprising. In recent months and years, faculty members have become lightning rods for attacks by critics who seek to silence debate, research, and academic freedom on campuses.

“My colleagues and I are trying to focus on teaching, research, and our students. Yet many of us are finding ourselves under attack and subject to hateful discourse,” Canin told CSU trustees last week.

Meanwhile, groups like Professor Watchlist and Campus Watch have been created to monitor faculty for any perceived “liberal” speech.

Colleges are not always supportive of faculty who fall into the political divide. At Essex County College in New Jersey, administrators suspended Lisa Durdan, an adjunct professor of communications, after she appeared on Fox News to defend Black Lives Matters protesters.

CFA leaders said they aren’t just interested in protecting their members’ jobs. Additionally, they’re in this fight to defend academic freedom, and the pursuit of truth on their campuses—the very things that define higher education as a public good.

“We live in a troubling new world where the truth is called fake, dissent is being criminalized, and the right is targeting colleges, universities, and university professors,” CFA President Jennifer Eagan told trustees on Tuesday. “Wake up and realize that there are forces mobilizing not just against the faculty, but against truth, learning, and the university.

“Make no mistake, CFA will stridently defend our faculty who are under attack by forces who have contempt for the university and for free inquiry,” she said. “Our successful defense of Dr. Canin speaks to CFA’s commitment to protecting all members of the campus community from the new wave of attacks on academic freedom and free speech… We hope we can count on the Board to make the same commitment.”