A tireless leader and advocate, Janet Eberhardt has developed programs that engage and mentor students and families. 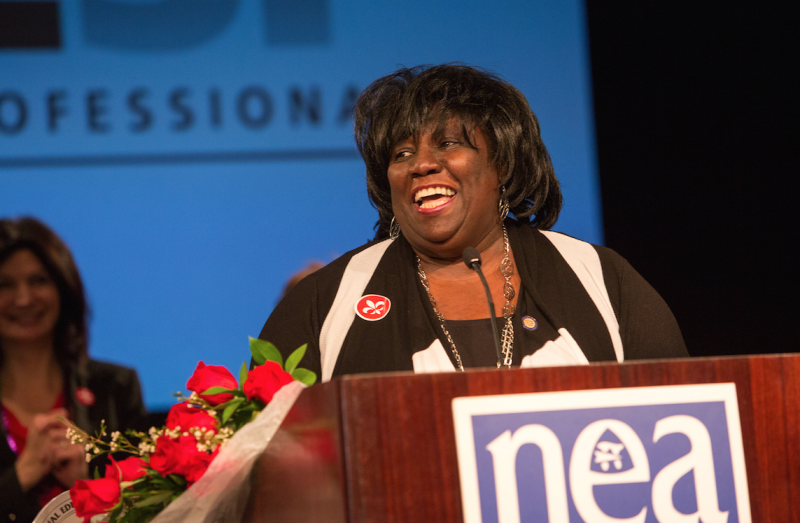 Among her peers, Janet Eberhardt has long been known as a fighter for student causes, defender of human rights, and champion of all things ESP (education support professionals). In her 29 years with the San Francisco United School District, Eberhardt has worked with students, parents, community support agencies, and local businesses.

A decorated leader and activist with the California Teachers Association (CTA) and United Educators of San Francisco (UESF), Eberhardt reached another career milestone Friday night at the National Education Association (NEA) Education Support Professionals Conference in New Orleans when she was named the 2015 NEA ESP of the Year.

“I say one thing to my students every day," said Eberhardt, a community relations specialist and elementary advisor at Monroe Elementary School in San Francisco. "And I say it to my fellow ESPs today: 'go the extra mile.'”

In her brief remarks, she stressed the need to approach each student as a whole student who is unique.

“Each student is an individual and has different gifts," said Eberhardt, who rides the bus more than two hours each day to and from work. "Please be bold, be strong, and help our kids to find their special gift.”

“Janet is an absolute dynamo,” said NEA President Lily Eskelsen García, who presented Eberhardt with a trophy, bouquet of roses, and $10,000 check. The annual award is NEA’s highest for an ESP.

“She is a leader on ESP training and issues, and is also someone who helps nurture other leaders,” García added. “It’s impossible to measure the impact that she has had in her work, in her passion, and in her activism.”

More than 1,100 ESPs and other educators from across the country are participating in over 50 workshops, seminars and panel discussions being held through Sunday at the Hilton New Orleans Riverside Hotel. The conference theme is, “Organize, Educate and Lead: ESPs Meeting the Needs of the Whole Student.”

Among her many duties, Eberhardt supports classroom teachers by addressing emotional, behavioral, and other issues students may have that are interfering with their academic progress and how they interact with others. Essentially, she works one-on-one with students and their parents regarding conflict resolution. 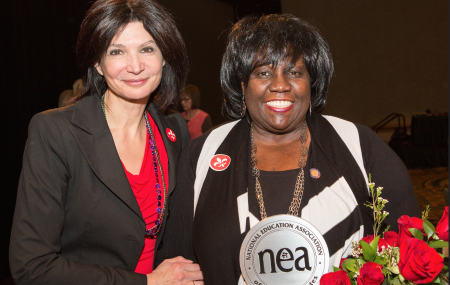 “First and foremost, Janet is a child advocate,” said CTA President Dean Vogel. “She is poised and powerful, always ready to take on new projects that will put students, parents, and community members in a better place.”

For example, for 25 years Eberhardt has worked on Reach Out, Touch a Life (RO/TAL), a mentorship program where she screens and recruits adults in the community to mentor students. More recently, Eberhardt created “I Believe in Me,” a program designed to help students build self-esteem and make positive choices regarding their personal lives. She also created Literacy Plus, a reading program that encourages students to visit the San Francisco Public Library.

“The goal is to unlock the love for reading,” Vogel said.

Eberhardt is such a believer in the value of education that she holds a bachelor’s degree in industrial and personnel management, and a master’s degree in counseling. She also earned teaching credentials in California and taught school for a year before returning to her present work.

“Janet was convinced of the greater good for students and families in her ESP role,” Vogel said.

As a union leader, she has planned, coordinated and delivered ethnic minority leadership training for regional members. She represented CTA as an NEA delegate to the Representative Assembly for 14 years, and UESF ESP members as a bargaining team member for 18 years. In 2006, she campaigned for ESPs to gain voting rights and be admitted as full CTA members, which they were after CTA changed its bylaws and 5,000 ESPs gained full membership.

“Janet has worked tirelessly to gain equity and fairness for ESPs,” Vogel said. “She not only finds a way to get the job done, she does it with class.”

More than four out of 10 public school employees are school support staff. NEA categorizes ESPs into nine K-12 job groups, plus one for higher education. The first ESP of the Year award was presented in 1992.