California Paraeducator is Named 2016 NEA ESP of the Year

Doreen McGuire-Grigg has spent her career speaking on behalf of children, paraeducator careers and the role of ESP in educating the whole student. 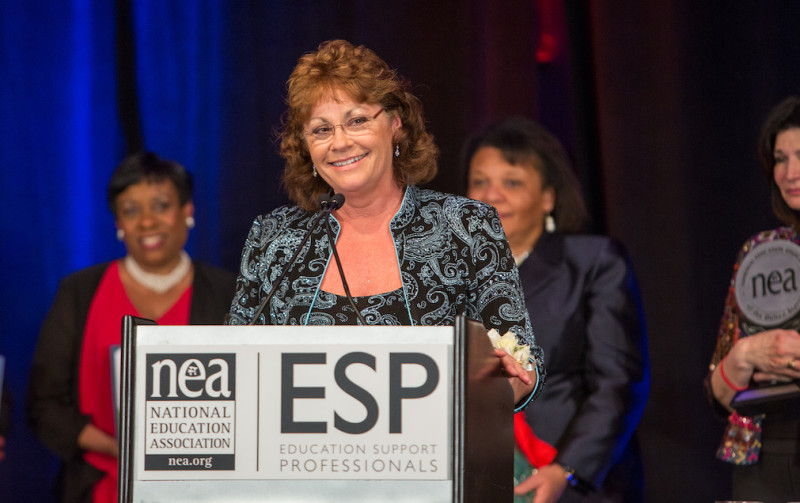 She has been an admired leader with the California Teachers Association (CTA) since 2006 when CTA changed its bylaws to include education support professionals (ESPs) as full-fledged members. Doreen McGuire-Grigg quickly joined the committee that helped write new bylaws for every ESP affiliate in the state. In 2011, she became the first ESP member to be elected to a statewide CTA position representing 5,000 ESPs and 20,000 teachers from 16 counties.

But McGuire-Grigg was already a pathbreaker. She helped to establish the Lakeport Unified Classified Employees Association (LUCEA) in 1993 after a superintendent told her and other classified staff that they didn’t have a voice at the table in their selection of health insurance. She didn’t like that.

An advocate for students, champion for ESPs, and special education paraeducator for 28 years, McGuire-Grigg was named the 2016 National Education Association (NEA) ESP of the Year during the awards banquet March 12 at the NEA ESP Conference in Orlando, Fla.

“We get up every day and the work is tough and we sometimes don’t get the respect we deserve, but go to work with our students because it’s where we belong,” said McGuire-Grigg, who works at Terrace Middle School in Lakeport. “We love to take care of our students.”

The annual award is NEA’s highest for an ESP. More than 2.8 million school support staff work in the nation’s public school systems, with more than 75 percent working at the K-12 level.

“She has walked picket lines, led rallies for ballot measures, and gone door-to-door in voting precincts,” said NEA President Lily Eskelsen Garcia, who presented McGuire-Grigg with a trophy, bouquet of roses, and $10,000 check.

More than 1,000 ESPs and other educators from across the country attended the three-day conference at the Hilton Orlando Lake Buena Vista Hotel. The conference theme was, “Uniting, Inspiring and Leading the Whole Student.”

“I think of my school’s office staff, our bus drivers, groundskeepers, paraeducators, food service professionals and am so proud that they have supported me and pushed me forward,” McGuire-Grigg said.

Eric Heins, CTA president, and other CTA members occupying two full tables at the conference erupted in a thunderous applause upon hearing the announcement. As a state affiliate president, Heins was the person who nominated McGuire-Grigg for the award.

“When it is necessary to advocate for our ESP constituents, Doreen is front and center steering the charge,” he said. “She leads by example because she is always fully informed and her tone appropriate to the cause.”

Heins said that when NEA and CTA offer training and other professional development opportunities, McGuire-Grigg always finds a local member or other CTA colleague “to move out of their comfort zone to participate and then apply what they’ve learned to union work.”

McGuire-Grigg grew up in the same community where she now works. Her father was a teacher and administrator with the Lakeport Unified School District for more than 35 years.

“It happens to be the poorest county in the state,” noted Eskelsen Garcia. “So she knows about serving the needs of the whole child.”

Among her colleagues, McGuire-Grigg has long been known as a fierce defender of human rights. After district officials laid off a well-respected custodian who had just adopted two children, McGuire-Grigg learned that it was done strictly to save money. She immediately took action by contacting staff at The Educator, CTA’s state publication. McGuire-Grigg pitched the custodian’s compelling story to editors who jumped on it. When the story appeared in the magazine, she made sure that board members were given copies.

“Doreen used her Association and community connections to organize a response,” Heins said. “As a result, the district found other ways to save the money.”

Last September, when the Valley Fire struck her community, McGuire-Grigg arranged to have bedding and cooking supplies, clothing and other necessities made available to school employees, neighbors, and others who had been impacted by the fire.

“We had many people who suddenly became homeless,” said McGuire-Grigg, who believed it was also vital to keep their spirits up. “I coordinated fun activities for families while they were displaced.”

As ESP of the Year, McGuire-Grigg will represent NEA and ESPs at national education conferences, media events, and other community occasions. She will also deliver a speech this summer at the NEA Representative Assembly in Washington, D.C.