Children in Dire Poverty: What Educators Should Know

A new book looks at the families - including 3 million children - who live in extreme poverty. What can public schools do to intervene in this cycle?

More than 1.5 million American households, including about 3 million children, are living on $2 per day, per person, according to sociologists Kathryn Edin and Luke Shaefer, authors of $2.00 a Day: Living on Almost Nothing in America. These desperately poor children are our students, and Edin and Shaefer found them living in homes that are crowded with jobless adults but empty of food and furniture, sometimes even without running water. Their parents have little access to any safety net — except food stamps, which were cut by Congress in 2014 — and can't find work in this nation's increasingly desperate low-wage job market. What would really make a difference in these families' lives is access to jobs that pay a living wage, and access to safe, stable housing. But there also are ways that educators can be more sensitive to students who live in poverty. Recently, Edin and Shaefer talked to NEA Today about the skyrocketing numbers of people living in poverty in the U.S., and what educators should know about their lives.

What has happened in the U.S. to help create these huge numbers of children living in poverty? How much of this story of poverty is a story about the labor market?

Kathryn Edin: Most people don't know that the American welfare system is dead. There is no catch-net out there, maybe especially in rural and suburban areas. And the bad jobs of today are so much worse than the bad jobs of 15 years ago. If you look at the Bureau of Labor Statistics data, you can see this somewhat through the increase in involuntary part-time employment — these are people like Jennifer H. [featured in the book] who are away from their children for 70 to 80 hours a week, trying to earn a living wage. The American labor market has been so badly degraded, it's shredded, and these people are just in a desperate search for work. Then you've got the loss of affordable housing, which leads to perilous double-ups. [Editor's note: Jennifer H. was working 70 to 80 hours a week at one of Chicago's poshest spas, washing towels and mopping floors, for $9.25 an hour, until her extended hours caused problems with her school-aged children. She quit, could no longer afford to pay for the rooms she rented in somebody else's house, and then moved to Texas to live with a family member, who sexually abused her daughter...]

One of the things the book does is describe how policy changes, like welfare reform or cuts to food stamp programs, actually impact people's lives. What should people who care about equal opportunity be paying attention to?

KE: I don't think any of the kids we met accessed early education programs, and I think it's because of housing instability. You could imagine that it would be a huge asset to these families. We often talk to people in early Head Start, and they are just warriors out there. To the extent possible, it also would be helpful if schools thought of themselves as community centers, rather than just schools, and provided services to parents, too. It's much easier for poor children to get access to health services, for example, than their parents.

Luke Shaefer: I wonder if schools ever host job fairs for parents? One, it would help parents access jobs, which is what they really need. Two, it would get them in the door of the school... Because of the jobs they often work, often at night, or with schedules that change frequently, or with multiple jobs, it can be very difficult for them to participate in school. 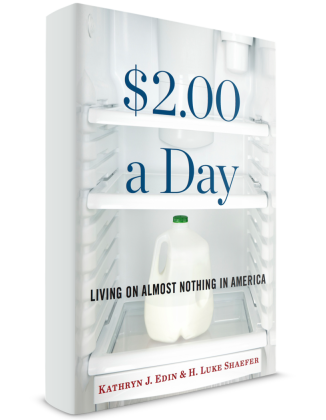 The book describes Azara, a 4-year-old living with non-family members in a house that probably should be condemned. Azara is a “bright cheerful girl who loves Dora the Explorer and is always dissembling her toys to see how they work.” But her mom has almost zero chance of breaking the cycle of poverty for her daughter. How much can public schools or teachers intervene in this cycle?

LS: When I think about the mechanisms of the cycles of poverty, one thing that is very interesting to me is the research around toxic stress. Very soon after we left Azara, she suffered some sexual abuse, which is not at all uncommon for children who are living in these very precarious living situations. For teachers, being aware of and understanding the toxic stress literature, of how repeated exposure to abuse can affect people physiologically, would be a great first step. We know that toxic stress can affect decision-making capability, memory, mood and impulse control — and that's true of adults and children. We also know that kids can be buffered from those effects through supportive relationships with adults — including teachers.

KE: It takes recognition that this kid has been exposed to toxic stress, and the oppositional behavior that a teacher might be seeing is very likely due to that stress. It's very easy for a frustrated teacher to say, 'These are [kids from] bad homes,' but we need to reject the narrative of the uncaring parent, and really look under the hood of that kid.

What else can educators do?

KE: Educators must really be on the lookout for school policies that marginalize poor children unintentionally. When we were in the Mississippi Delta, there were occasions when school policy made it difficult for these children. There was one policy that required students to alternate the color of their school uniform, but the Hicks family [featured in the book] couldn't afford two uniforms for each of their children and so the kids were constantly in trouble for the rules. Tabitha talks about the shame of wearing the same shirt every day.

Another student, Brionna, was in a more integrated school in Michigan — but there were 100 things that made her stand out [from more middle-class students.] She was tormented by the other kids. Bullied for her free backpack, among other things. She never had school supplies. The whole time I knew her she had a severe facial rash from stress. I remember going to the school office with her because, three days into the school year, she still didn't have a bus pass — and the secretary just saying, 'well, they're not going to be in until next week.' But the smallest thing, like a bus pass, can be a real obstacle for these children. And unless we want their parents to turn into criminals, by selling their food stamps to buy bus fare, we need to pay attention to school policy and implementation.

LS: The question is this: Do your policies have the effect of separating poor children? An interesting exercise for teachers who read $2 A Day might be to consider how you do school breakfast at your school. Does it isolate kids or does it help them participate in the larger group?

KE: The way forward is to bring greater dignity to the poor. You’ve got to ensure that you’re not doing things that shame kids. If you deepen and extend their isolation, if you make them less a part of the school culture, you'll be robbing them of that critical resource that every kid needs — and that is a caring adult at school.