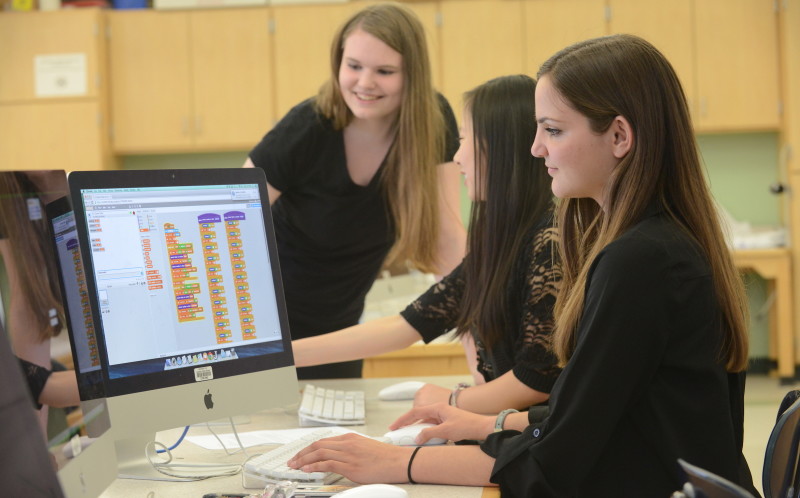 Clickety, click, click. Pause. “This is almost right,” sighs the young computer programmer, who is attempting to type a computer code to create a text encryption program.

But you knew that, right? In 2015, there should be no question about girls’ ability. Of course, they can “do” computer science. The question for the 21st century is: Will they? And the answer, hopefully, is yes.

The number of computer science jobs in the U.S. is growing two times as fast as the national average for job growth. By 2020, this nation will have 1.4 million new jobs in computer science—but only about 400,000 computer science students, according to U.S. Department of Labor projections.

Who will be our future’s software developers, computer hardware engineers, database administrators, and computer network architects?

Access to these 21st century skills is key: In 2013, only about 3,200 high schools in the U.S. offered AP Computer Science — about the same number that taught AP music theory, according to the College Board. And among the test takers, just 19 percent were girls. In Mississippi, only 14 schools teach computer science — and even that state has 1,200 open computer science jobs, according to code.org, a non-profit dedicated to bringing computer science to every school. (Look up your state.)

Only one state—Texas—requires every high school to offer computer science to all students.

Meanwhile, even if courses are offered, many students have scant incentive to take them. In half of states, computer science doesn’t count toward graduation, as either math or science credit.

“Think about this: 70 percent of the 1.4 million jobs in computer science will go unfilled because of a lack of computer science college graduates. We can turn that around really quickly if we get girls interested,” says Reshma Saujani, founder of Girls Who Code, a non-profit dedicated to providing computer science education and exposure to 1 million girls by 2020.

Fortunately, things already are looking up. From the White House to the schoolhouse, more than 22 million students, including kindergartners, participated in an “Hour of Code” last year. Meanwhile, the number of AP Computer Science test-takers increased by about 20 percent. (At Needham High, near Boston, they needed to add a second AP class this fall, and they’re still turning kids away.)

With the careers of tomorrow in mind, educators—from kindergarten to high school—work to hook girls and boys on the click and clack of computer coding.

“Check this out,” murmurs Needham senior Nefeli Scaltsas, as she pushes the arrow keys on her iMac keyboard, demonstrating an animation code she wrote a few weeks earlier. Click, click, click, and across her monitor an orange kitty runs and kicks a soccer ball toward a net goal.

The Day Everybody Coded

Last year, on Dec. 14, President Obama also scored big, becoming the first U.S. president to write a line of code: specifically, "moveForward(100);". He had the help of a few dozen New Jersey middle school students he had invited to the White House for an “Hour of Code,” a one-hour event developed by code.org that takes place each year during Computer Science Week.

"You gotta slow down, 'cause I'm an old man," Obama told a student as she explained the coding program to him.

But to the media covering the event, Obama spoke more seriously about the need to strengthen STEM education in the U.S: "Part of what we're realizing is that we're starting too late when it comes to making sure our young people are familiar with not just how to play a video game, but how to create a video game." 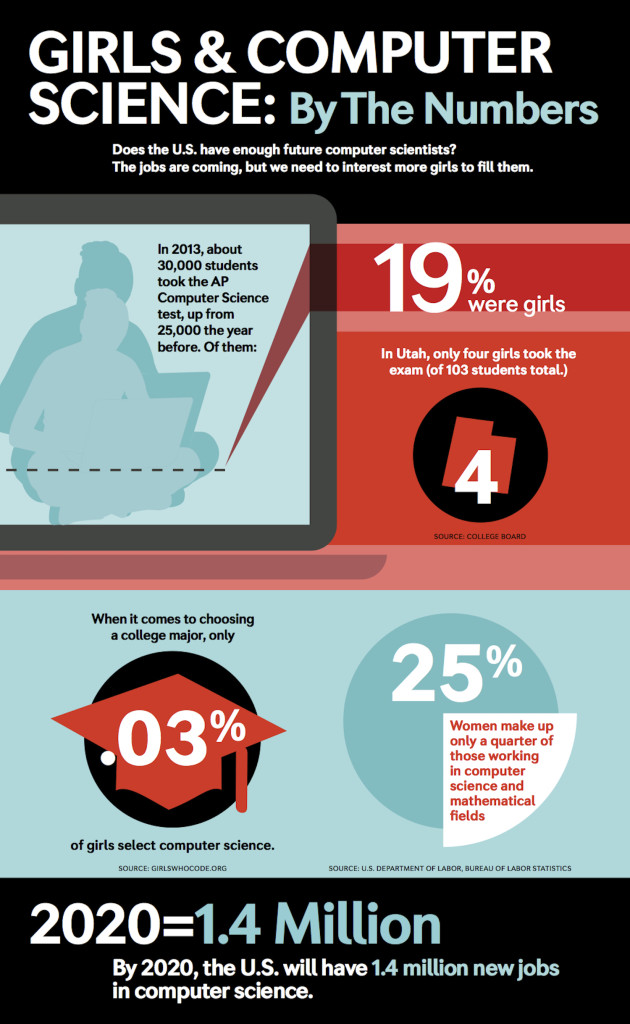 Girls & Computer Science: BY the Numbers (Click to Enlarge)

The Hour of Code is an easy, low-barrier step for teachers to take to get even their littlest learners interested in computer science. “Last year the kids had to program the angry bird to get the evil bird — and they all knew about angry bird. This year code.org added Elsa from Frozen,” says library media specialist Deb Sweeney, who brought Hour of Code to her K-3 school, Station Avenue Elementary in South Yarmouth, Mass.

“They loved it! And what was really important for them to learn is that programmers make mistakes, and it’s not a bad thing,” Sweeney adds.

In December, the White House also announced new commitments, including pledges by 60 school districts—New York City, Los Angeles, Clark County, Nev., and others—to offer computer science to students, and $200 million in philanthropic contributions to train 10,000 teachers in computer science by this fall and 25,000 teachers by the start of the 2016 school year.

Coding in the Classroom: Where are the Teachers?

“The movement will fail if we don't increase the teacher pool,” says Girls Who Code’s Saujani — but this is not an impossible task, she adds. “Computer science is not something that, if you're trying to pick it up in your 40s, 50s, and 60s, it's impossible. It's possible! It's about sharing knowledge, and we do have volunteers who will help our teachers in our classrooms.”

Last year, Needham High’s Jane Chinnaswamy, an experienced math teacher with no previous exposure to computer science, undertook free training through code.org to teach computer science. Now, her new class — whose enrollment has doubled over the past year — focuses less on the mechanics of coding and more on 21st century career skills. Her students often work in small teams to collaborately find solutions, persist through failure after failure, and think logically.

That team-based approach is echoed on Thursday nights, when about ten girls swing into Chinnaswamy’s classroom for Girls Who Code (GWC) club meetings with Julie Rice, a 20-something software programmer from nearby Boston. As she steers the girls through coding tasks using Scratch, a free programming language developed at MIT, Rice relies equally on GWC-provided curriculum and her own experiences as a woman in a field dominated by men.

“I’ve had male colleagues assume that I need help solving basic problems, or attempt to answer questions on my behalf. I’ve been told, ‘You don’t look like a programmer,’ ” says Rice, who was one of two women in her college’s computer science program. “I tell the girls here that they’re not alone. We are all breaking the stereotype that you have to be a nerdy white guy.”

Rice roams the room, handing out lollipops, and reviewing their scrolling Matrix-style data with a helpful eye. Meanwhile, junior Dianne Lee is polishing an app she designed to help the local historical society with walking tours.

“There is this thing they call ‘impostor syndrome,’ where you don’t fit into what programmers call the ‘bro’ culture and you feel like you don’t belong,” explains Lee, who also attended a GWC summer immersion program. “But if you come here, the purpose is to bond, build confidence in yourself and your skills, and know that you do belong in this place,” she says with a smile.