We teach our students that America is a nation of immigrants, where we welcome and celebrate those with the courage to take a chance and risk everything to seek a better, safer life for themselves and their families. But as our kids hear news about travel bans, border walls, and refugee quotas, they start asking questions as they try to make sense of conflicting messages. If you’re struggling to find the best answers, books can help. We talked to Ruth Freeman, an English Language Learning (ELL) teacher and children’s author about children’s books that deal with the experience of students who are new to this country.

“Thankfully, there are more and more books exploring this topic,” Freeman says. “Not only do   they allow our ELL students to see themselves represented on the printed page, but they allow other readers to gain more understanding and empathy for newcomers. The following are a few of my favorite titles that I would like to recommend. 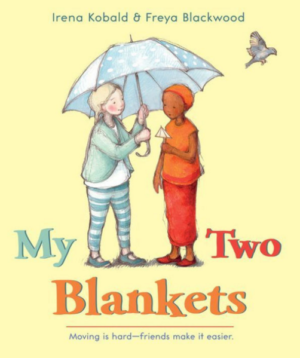 What I especially love about this sweet story is how the illustrator has drawn the way a newcomer first hears English. There are streams of symbols and shapes coming out of people’s mouths, not sounds. A new friend teaches her words and she begins to feel at home. As the book says, “moving is hard -- friends make it easier.” She slowly learns to weave her old and new cultures together until, at the end, she comes to know that no matter where she is she will always be herself.

A boy who comes to America from a refugee camp desperately wants a bike, and the girl in his neighborhood has one. There is a funny mix-up of names.  He calls her Whoosh because she rides by so fast. Will the boy find a way to befriend her and get a ride on the bike? The big, bold illustrations help tell this wonderful story about making friends in a new country.

All the Way to America: The Story of a Big Italian Family and a Little Shovel by Dan Yaccarino (Knopf) 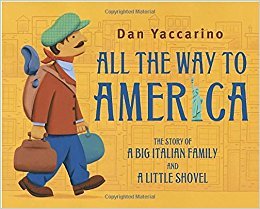 A story told about four generations of Italian-Americans with a little shovel that was used differently by each of them. The last character in the story is the author himself! Colorful illustrations, simple text and a heartwarming message passed down to each generation (work hard, enjoy life, and don’t forget to call home) make for a wonderful picture book.

A beautiful and poignant story, told in English and Arabic, of one family’s journey to escape the war in their country.  While the country is not named as Syria, the amazing illustrations are by a Syrian sculptor.  Each picture is a collage of polished stones bringing to life the parents, children and burdens they carry on their backs as they walk to a new life.  The sadness of saying goodbye, the bombs and the lives lost at sea are balanced carefully and sensitively with hopes and dreams for peace in their new home. 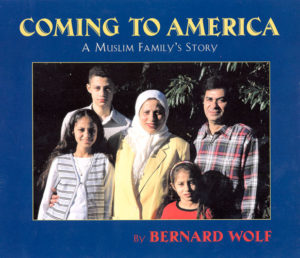 This is the true story told with photographs of an Egyptian family and how they adjust to their new life in New York City. Readers see the three children settling into their elementary and middle schools. We see the father at his job and the mother going to school to learn English. Pictures of the family shopping, doing homework, praying, and eating dinner together give readers a real sense of what it is like for members of one family as they work hard in the pursuit of a better life.

It Ain’t So Awful, Falafel by Firoozeh Dumas (Clarion Books) 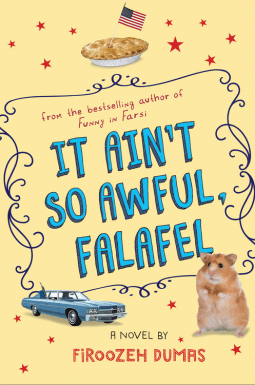 What a fantastically funny book!  Set in the 1970s, eleven-year-old Zomorod comes from Iran with her family to California and, to fit in, promptly changes her name to Cindy. After several years there, and moving four times, she has become almost a typical American middle school student, except that she still has to explain things to her parents like: snack foods, bean bag chairs and Gilligan’s Island on TV. However, when the Iran Hostage Crisis occurs, life for an Iranian family in America turns more serious. A funny, distinctive voice and original story.

This fictional story was inspired by my wonderful middle and elementary school students. Anaïs was the best English student back home in Congo. Here in Crazy America she feels like she doesn’t know English at all. Nothing makes sense...like chicken fingers on the lunch menu! She writes letters to her grandmother back home who tells her to find one good thing about America every day. Slowly, Anaïs does. Even while she worries about her father and brother left behind in Africa, she discovers pizza, autumn leaves, sledding, friends and teachers, until, at the end, they tell her she is one good thing about America.

Outcasts United: The Story of a Refugee Soccer Team That Changed a Town, adapted for young people by Warren St. John (Delacorte)

This is the inspiring true story of a boys’ soccer team in Georgia made up of refugees and the Jordanian woman who coaches them. Calling themselves the Fugees, the boys struggle to adjust to life in America while the town of Clarkston, Georgia, struggles to adjust to them. Many on the team have traumatic memories of the conflicts they left behind in their home countries. Their coach has to care for her players while finding a practice field, uniforms and funding. Not just for soccer fans, this is a story of hope and determination and achievement. 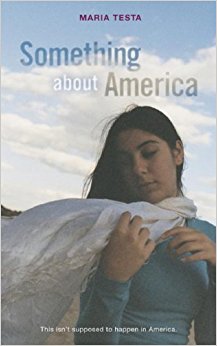 Something About America by Maria Testa (Candlewick)

A girl comes to America with her family to get medical treatment after she was badly burned in her home in Kosova, Yugoslavia. The story opens when she is thirteen. She has recovered but has scars on her neck that she covers with scarves. She tells her story in lyrical free verse, how she feels American, and how her parents do not. Then, an incident in a nearby town raises the issue of hatred and anger towards immigrants and she and her parents must decide how to respond. A beautiful, thoughtful story.

The Sun is Also a Star by Nicola Yoon (Delacorte)

This book has everything: the two main characters who tell the story are distinctive,  appealing and funny; there is romance; and tension as one of the teenagers is due to be deported the next day to Jamaica with her family. But, on this last day, Natasha falls in love with Daniel, a Korean American. They spend one day together while she tries to stop the deportation. Telling their stories in alternating chapters, this is a touching and captivating novel.