Educators travel to Capitol Hill to talk about how school and community partnerships are a worthwhile investment. 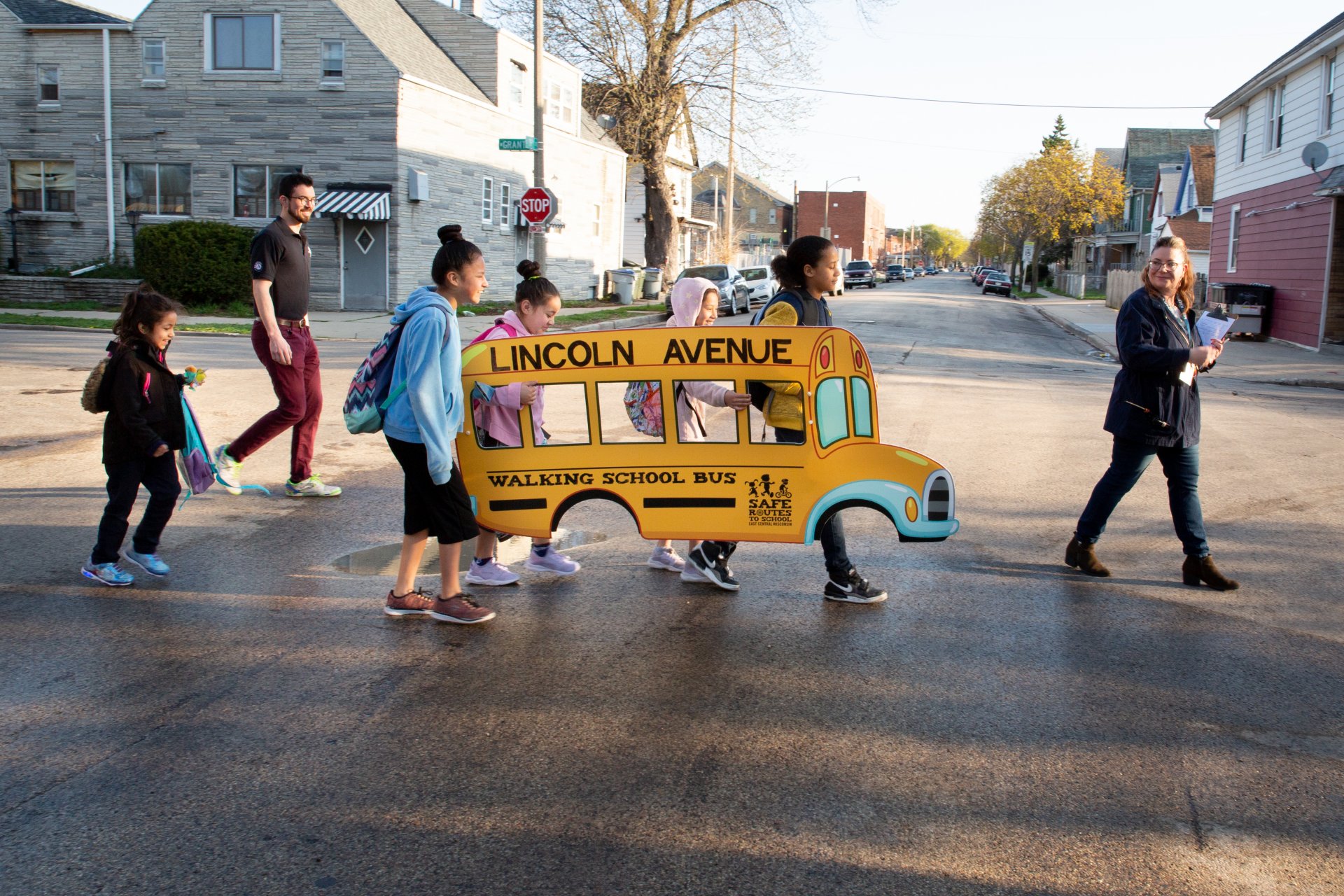 While most of the city is still asleep, Janeth Prado heads out to  the busy sidewalks of Milwaukee, carrying with her a large cardboard cutout of a yellow school bus, as bright and cheerful as the rising sun. Prado is one of the parent volunteers who leads the Lincoln Elementary walking school bus.

Stopping at houses along a one-mile route to “pick up” students and escort them safely to school, the walking school bus began after some parents of the bilingual community in the city’s south side said they didn’t want their children to walk to school alone. If they couldn’t walk their kids themselves because of a work or family conflict, they’d keep them home rather than risk their safety.

Lincoln Elementary is a community school and Congressional staffers learned about it and the walking school bus at a briefing on Capitol Hill last week.

Community Schools: Hubs of a Neighborhood

The community schools model centers public schools as hubs for communities and combines a rigorous, relevant educational program with extended learning opportunities, family and community engagement, and an infusion of social services.

Ryan Hurley, director of Milwaukee Community Schools Partnership, explained that community schools operate on the belief that schools and communities can work together through partnerships to build stronger schools and stronger neighborhoods with broad engagement and collaboration from all stakeholders in a community – everyone from students, parents, and school staff to local businesses and nonprofits, government, faith-based organizations, health providers and higher education institutions. The first step, he said, is identifying aspirations and challenges.

“After a series of community conversations, we discovered safety was a top priority,” Hurley said. “The community identified a priority and came up with a solution – the walking school bus.”

Now kids are getting to school safely, and in turn, attendance rates are up. One student who was absent more than 20 percent of last year has had 100 percent attendance this year. Yet another benefit is the visibility of the bright yellow school bus cutout and smiling group of kids and parents. People in passing cars honk and wave, happy to see their neighborhood school taking the extra step to provide safety for their community’s children and wanting to show their support or lend a hand.

“Some community schools are in areas where healthcare is scarce, so partnerships with hospitals or medical schools are created,” said Kyle Serrette, a senior policy analyst in NEA’s Teacher Quality department. “Some might have a dental clinic; another might offer free glasses for kids who can’t afford them. We are obsessed with stakeholders at community schools – it’s about grassroots problem solving where partnerships are tailored to the community.”

Community schools can be successful in any area, but the reality is that more than 50 percent of public school students live in poverty, communities often plagued by hunger, homelessness, and crime. And educators know that children who are hungry or homeless or traumatized by violence can't learn.

“We don’t want a ZIP code to determine a student’s dreams,” said Stephen Kostyo, a policy advisor at the Learning Policy Institute. “Community schools can help address the needs of students whose housing is insecure or whose nutritional needs aren’t met.” Community schools around the country partner with affordable housing providers, food banks and local grocers or restaurants to fulfill the needs of students and their families.

They’re also a sound investment. Kostyo says research shows that for every dollar invested in a community school, the community gets $15 back because better schools boost the economy and well-being of its population.

The research also shows that the community schools model fulfills the requirements of the Every Student Succeeds Act. Panelists at the briefing, including Milwaukee Teachers Education Association vice president Ingrid Henry, NEA-New Mexico vice president Mary Parr-Sanchez and coordinator for Community Schools for the Las Cruces Public School District David Greenberg, told the Congressional staffers about federal funding opportunities and how the government can support districts who want to create community schools.

NEA's education funding action is focused on the  Keep Our PACT Act, a bill that provides a 10-year glide path for Congress to fully fund its 40 percent commitment to IDEA and to fully Fund Title I.

Increasing investment in community schools is an NEA priority, though the Trump administration zeroed out the program for FY20, and through the power of its members is calling on the Appropriations Committee members for a $40 million increase (which is nearly all of the Trump Administrations’s requested increase for charter schools).

Take action and tell your senators to cosponsor the Keep Our PACT Act.