"My rights in the classroom protect the right of my students to a good education," says California teacher as court reviews 'Vergara' decision. 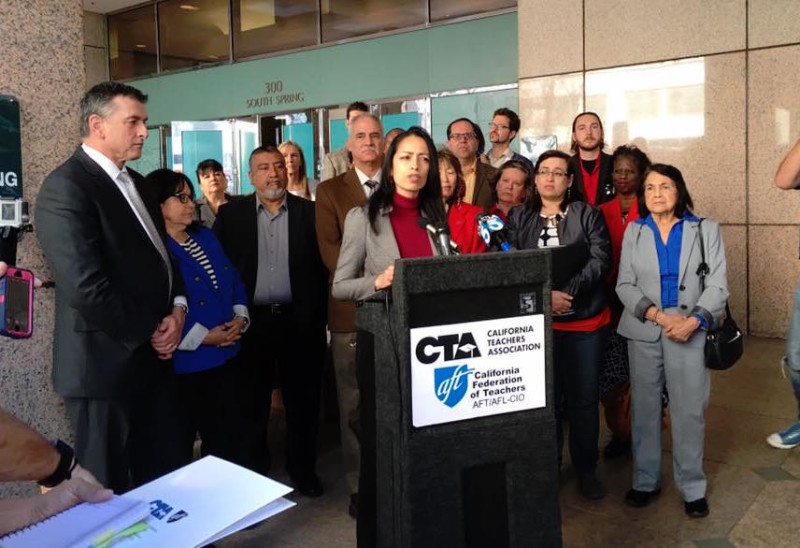 Fifth grade teacher Gabby Ibarra speaks to the press prior to oral arguments for Vergara v. State of California in front of the Ronald Reagan Building in downtown Los Angeles, February 25, 2016.

The deep-pocketed corporate interests who have been undermining public education across the nation had reason to celebrate on June 10, 2014, when a superior court judge in California ruled that laws governing teacher due process were unconstitutional. The court stayed the verdict in Vergara v. State of California, however, after the California Teachers Association (CTA) and the California Federation of Teachers, as well as California Governor Jerry Brown, and State Superintendent Tom Torlakson, immediately filed an appeal, denouncing the decision as "without support in law or fact.”

On February 25, Vergara headed back to court. Attorneys representing 400,000 educators asked a three-justice panel in the California Court of Appeal to overturn the meritless decision. Michael Rubin, the legal counsel representing California’s educators, emerged from the courthouse in downtown Los Angeles optimistic, telling reporters outside that he was encouraged by the focus and tenor of the justice’s questions, which zeroed in on the profoundly flawed reasoning behind the plaintiffs’ arguments. "We are confident we will prevail," Rubin said.

The decision issued by Judge Rolf M. Treu in 2014 is riddled with judicial errors and represents an extraordinary example of judicial overreach. During the trial, the court ignored evidence demonstrating how California’s due process protections for teachers improve public schools, while pronouncing the laws to be deterrents to good teachers being hired in high poverty schools—a claim unsupported by the facts.  "There is no evidence—zero—that these statutes are the cause of any constitutional violation," Rubin said.

Because the evidence fell so far short of establishing any link between teacher due process and educational disparities, the court had no business striking down the statute, Rubin said. "Disputes over education policy are for the legislature to resolve, not the courts."

Gabby Ibarra, a fifth grade teacher at Niemes Elementary school in Cerritos, California, told reporters outside the court that the relentless assault on teacher workplace protections is about stirring up “a problem that doesn't exist": the supposed insurmountable obstacles in firing bad teachers and the impact on lower-income students.

"My rights in the classroom are what protect the right of my students to a good education," Ibarra said. "The Vergara case undermines our profession. We are the true advocates for our students. We’re with them day in and day out and we know what they need. Corporate interests do not."

"Students would be really hurt if these statutes are overturned,” added CTA President Eric C. Heins.
Dolores Huerta to Students Matter: Cease and Desist
A few weeks ago, Students Matter, the group behind the Vergara lawsuit, was featuring renowned civil rights leader Dolores Huerta on its website as a prominent supporter of its legal action against teacher due process. Huerta, whose foundation has worked on education issues for the last five years in California's Central Valley, had made a video with the group. But after learning that the Vergara suit would strip basic workplace rights from teachers, and that Students Matter was allied with the same interests who support budget cuts to California schools, Huerta, saying the group misrepresented details of the case in an attempt to get her support, immediately demanded the video be removed. Read Huerta’s cease-and-desist letter to Students Matter.
After the trial court decision in 2014, support for fair treatment of California’s teachers poured in from across the state and nationwide. Preeminent education policy experts, school board members and administrators, civil rights advocates, award-winning teachers, and top legal scholars filed amici curiae, or “friend of the court” briefs urging the Court of Appeal to uphold the basic protections on which teachers and students depend. The National Education Association also filed an amicus brief, urging the court to restore to California Legislature the prerogative to make educational policy by striking down the Vergara ruling.

The lawsuit was filed in May 2012 by a group called Students Matter on behalf of nine California students. The group was created by Silicon Valley entrepreneur David Welch and is supported by privateers who see united and vocal educators as obstacles to their corporatist reform agenda. Recognizing that this well-funded operation is unpopular with the general public, its architects present themselves as guardians of the interests of disadvantaged students. But make no mistake: Vergara is only about dismantling teacher job protections. Students Matter focuses on the wrong problems and the wrong solutions, completely ignoring the incredible challenges high-needs districts face in recruiting and retaining good teachers.

"Any lawsuit that tries to remove those rights, claiming that this is the reason why students don't have the best education possible, was written by people who either don't know what happens in schools or who wish harm to public education," Sanchez remarked to reporters last week.

In fact, teacher job protection statutes, which California legislators developed and regularly review and update, allow school districts considerable latitude in hiring, firing, and assigning teachers, Rubin pointed out. In addition, these protections are important to address the severe teacher shortage, helping to make teaching more attractive despite low pay. The Vergara decision, if allowed to stand, will make it even more difficult to attract quality teachers to struggling schools.

"High-poverty districts do not suffer from too few teachers being removed; they suffer from too much teacher turnover," NEA President Lily Eskelsen García said. "Attracting and retaining effective teachers to these schools must be the highest priority, but the trial court’s decision will only make that much harder."

A decision in Vergara v. State of California by the California Court of Appeal is expected by the end of May.