Unleashing your inner artist, architect, or writer can lead to a more fulfilling retirement—especially in these trying times. 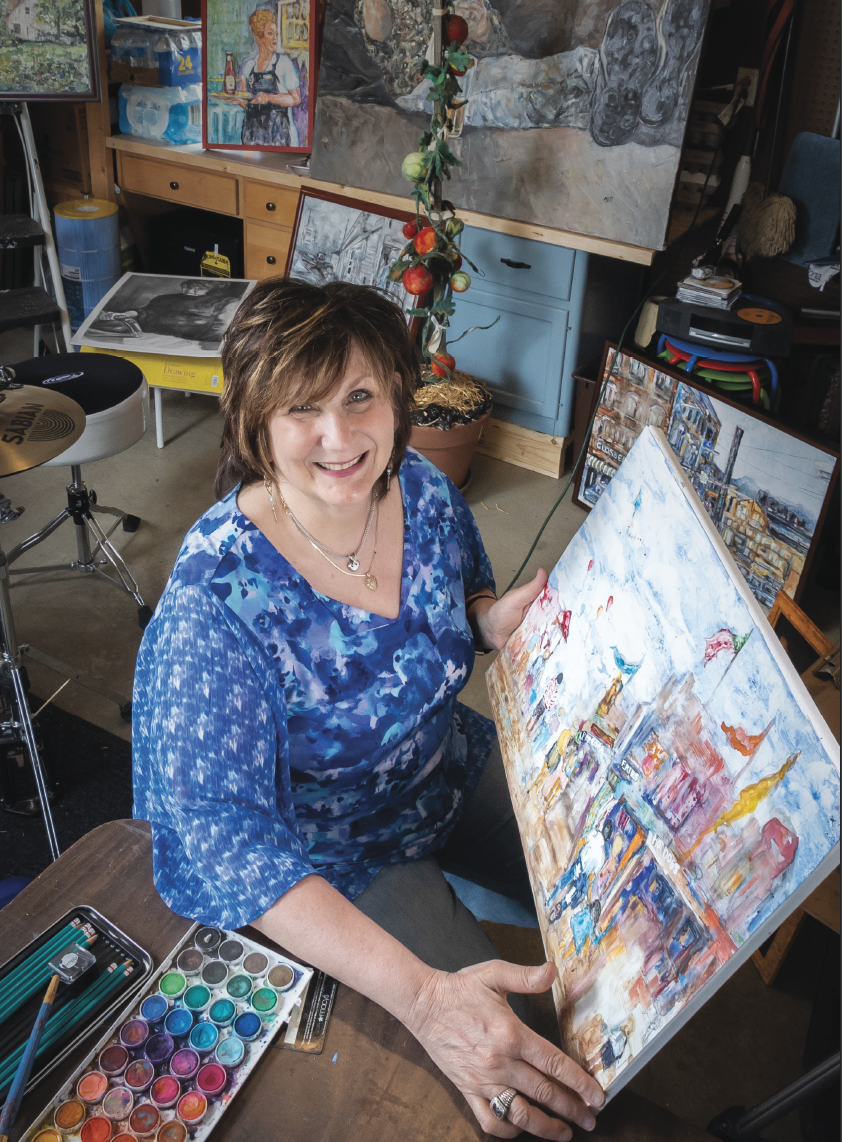 A delicate stroke of color across a canvas, a photograph captured in perfect light, a garden cultivated just so, a piece of furniture painstakingly crafted by hand...creativity comes in many forms, and it has the power to transform how we see ourselves and the world around us. It can transport our minds to new places, provide structure and meaning in our everyday lives, and maybe even help us find some of the answers we’ve been seeking.

The act of creating is also a form of exercise for the brain. Just as physical workouts can strengthen the body, creative pursuits can help maintain a strong mind.

The cognitive benefits from creativity are many, says Carol Reszka, a clinical social worker and program manager of the older adult counseling center at Aurora Mental Health Center, near Denver, Colorado.

Some of those benefits come from simply having the opportunity to explore a personal interest. “Many of us are defined by our work. And many of us—especially the generation that has already retired—were defined by parenting,” Reszka says. With full-time parenting and work behind them, she adds, older adults can create purpose and meaning outside of those roles.

“If we are doing emotionally well into our later years,” Reszka says, “there is a chance we are doing better physically. We tend to take better care of ourselves when we have better self-esteem, and we are doing something that feels good.”

The Journal of Aging Studies also bolsters the case for creativity, citing six features tied to successful aging—purpose, interactions with others, personal growth, self-acceptance, autonomy, and health—all of which can grow out of developing new interests and talents.

But tapping into your inner creative genius can be a daunting thought. Where do you even begin?

Remember that you don’t have to transform into a musical virtuoso or a master painter overnight. Being creative can mean building a volunteer group from the ground up, exploring a new destination, or even rearranging your furniture. The secret lies in following your passions.

“If you don’t have those,” Raneri says, “you are going to wither up.”

Raneri lives in LaTrobe, Pa., and her creative passion lies in painting images on fabric that depict women involved in day-to-day tasks. “I love staring at their faces while they’re doing everyday things,” says Raneri, whose favorite painting surface is Yupo, a waterproof, synthetic paper that is also recyclable.

Raneri says she gets energy from creating art. “When people retire, one of the most important things they need to learn is that life isn’t over.   They can be a phoenix. They can do whatever they want to do. If they want to be a backup chick, they can do that.”

For her, that last statement isn’t some random musing. Last year, after learning to play the guitar, she began singing backup in a bar for a local rock band.

Inspired by giving back

Sid Neighbours, who taught music to middle school students at the beginning of his career and then taught math and special education at a high school in Suffolk, Va., says that the musical creativity he experienced as a youngster served as his launching pad into other things.

Neighbours was raised by an organist mom who has played for the same church for 70 years. When the coronavirus locked down the nation, Neighbours began uploading videos of himself playing hymns on his grandmother’s 100-year-old piano. He posted them on his Facebook page for housebound family members and friends.

“I was just getting into a good retirement routine; then, quarantine came up,” Neighbours says. “Every day [during quarantine] I recorded myself playing something. And sometimes the dog put on a show, too,” he laughs.

Neighbours says creativity helps him relieve stress, but mostly he considers it a way to serve others. Before the coronavirus outbreak, he played piano for his church. “I can’t go to church and help move chairs or lift stuff,” says Neighbours, who has battled health problems, “but I can go play the piano, and I can direct the choir. That’s a big piece of it—the giving back.”

Neighbours calls creativity his “lifesaver.” He says creativity comes in all forms—not only art or music.

“Some people are fabulous cooks,” he says. “Some people have yards that look like green carpets.

Others keep plants. Even people who volunteer to read a story to a child are expressing creativity,” Neighbours says. “You read to that child in some sort of special voice, giving it that extra step of love. All of that is creative, because creativity is what you do for others,” he adds.

Music is also a meaningful part of Carla Boone’s upbringing. A former sixth- and seventh-grade English teacher in New Jersey, Boone was raised by an organist mother and a father who “was one of the best tenors I knew,” she says. Today, Boone is a sought-after vocalist and pianist when friends and family members host events.

Like Neighbours, Boone sees music as a way to serve. It brings “peace and comfort to other people.” And the ability to bring joy, she adds, “makes you feel better as well.”

Use it or lose it

Melva Quick-Lewis, who lives in Bettendorf, Iowa, and taught eighth-grade language arts and reading for 38 years, says that for just about every question, the answer is creativity.

“I do all kinds of things,” Quick-Lewis says. “I dibble and dabble.” In May, she submitted one of her poems to the Retired Review, the newsletter of the Iowa State Education Association Retired.

One of her favorite ways to remain creative, Quick-Lewis says, is to post positive, three-line messages on Facebook twice a day.

“I think it’s a marvelous time of day.” And she’s inspired by twilight, when she says “everything is soft and closing down.”

Recently, she turned her creative eye toward “messing with canvas and acrylics,” a skill she began to develop after attending a workshop.

Quick-Lewis says, when asked about creativity’s biggest benefit for seniors. “Creativity makes you look at things in a way other people don’t see it.” Then, she says, you must “articulate—through writing, art, drama, or acting—what you see.”

An avid yogi, Quick-Lewis sees creativity there, too. “Yoga is about stretching my spirit and finding peace,” she says, adding that writing poetry offers the same thing. “When I do yoga, I’m looking for inner peace. I’m looking for where I am and being in touch with that... Poetry can also bring me to a place of peace.”

‘What did you always want to do?’

Marvin Carter is a former high school agriscience teacher living in Camden, Ala. He bought his first camera—a Minolta 7000—in 1981, when he was in the military and stationed in Paris. “Everyone is given a gift. Everyone is given a talent,” Carter says. “Some talents are just more obvious.” Carter says that the best way for retirees to discover their unique gifts is by working with others. “Most people say they don’t have gifts because they are not involved,” Carter adds.

“It’s not like the creative fairy tapped me on the head.” Would- be artists, she says, must be responsible for cultivating their own gardens. “You have to find that in yourself—where you can blossom.”

Answering one important question can help light a creative spark, she says. What did you always want to do that you never explored? Start with that thing, she offers. “Just work at it. I’m not saying do it once a week. I’m saying do it every day. Really work on it. You will be a lot happier...You have to foster that inner creativity. Set that time aside for yourself.”

Next, advises Raneri, find other people with interests like yours. She notes that the friend group she had as an educator is markedly different from the one she has now. “I went from holiday vests to leather vests and tattoos,” she laughs.

“Don’t be afraid to take a chance and just see where it leads,” Raneri adds.

In April, looking toward another housebound weekend during the coronavirus quarantine, Raneri made plans to bake with her 97-year-old mom, Lucy Pollock. An artist friend suggested they livestream the activity. After only a month, their weekly Facebook show, “Baking with Lucy,” had 15,000 followers.

Raneri and her mom—along with all of these inspirational NEA-Retired members—seem to be living proof of what scientists tell us about creativity.

As bestselling author and neuroscientist Daniel J. Levitin explained in a PBS interview: “The peak age of happiness tends to be about 82. People get happier...Your neurochemistry shifts. But there’s also kind of a psychological and very practical basis. You realize you’ve gotten through all these things that were stressing you out. If you make it to 82, you know you’ve managed, you’re okay!”

And, perhaps most important, Levitin reminds us, “You can change yourself at any age. You can look at your life when you’re 75 and say, ‘I’m going to do something different,’ and do it.”

A special thank you goes to the more than 100 NEA-Retired members who responded to a Facebook post seeking interviews for this article.

How to Ignite Your Creativity

Still looking for that muse sitting on your shoulder? Try these tips to get your creative juices flowing.

Walk in nature or simply sit outside. Notice colors, textures, patterns, and the way light and shade change the things you see. Then, notice what you smell. What sounds do you hear? Feeding your senses can help you find inspiration.

In her book The Artist’s Way—there’s also The Artist’s Way For Retirement—author Julia Cameron suggests writing “morning pages”: three pages written longhand and stream-of-consciousness first thing in the morning. She also advises making an “artist date”—a solo weekly trek to explore something you find interesting. Together, the two practices can light a creative spark, Cameron writes.

Visual artist and NEA-Retired member Mary Ellen Raneri urges would-be creatives to consider taking a class to get started. “You have to connect with somebody,” she says.

In the book Bird by Bird, the bestselling author Anne Lamott tells would-be writers to “calm down, get quiet, breathe, and listen.” And, she offers sage advice that applies to all creative pursuits: “Don’t look at your feet to see if you’re doing it right. Just dance.”