Cuts to Higher Education Taking the 'Public' Out of Public Universities

The cut to Wisconsin higher education funding that Gov. Scott Walker has recommended is so massive that the University of Wisconsin-Madison could do away with its schools of nursing, law, business, pharmacy and veterinary medicine — and still need to find more ways to trim costs. Meanwhile, the proposed cut in Louisiana is as large as the state's entire community college budget.

And it's not just Wisconsin and Louisiana. It's also Illinois, Arizona, and Kansas where Republican governors and state legislators are upending what it means to be a state, or public, university.

"It feels like part of an overall shift away from public funds for a public good toward something more like an individual or private system," said Jackie McGrath, an English professor at the College of DuPage, a community college in Illinois, where Gov. Bruce Rauner announced Wednesday that he will seek a decimating $385 million cut to higher education.

A Product, Not a Service

The elimination of public funds to higher education program has clear consequences for students and families, noted McGrath, an Illinois Education Association board member. Practically, it transfers the burden of paying for higher education from the state to the student. In fact, decades of funding cuts across the nation have lead to staggering hikes in college tuition and student debt. In Arizona, for example, where state funding declined $3,508 per student between 2008 and 2012, tuition and fees increased by $3,674 during that same time. Overall, the annual cost of a four-year public college has tripled over the past 30 years: from $2,100 in 1980 to $7,100 in 2010. 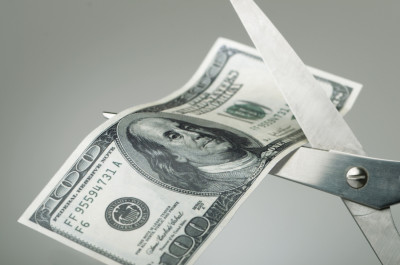 Funding cuts also lead to program cuts -- often in the kind of student services that boost graduation rates, like math assistance centers or academic advisors. Sometimes entire academic departments disappear. (Like, for instance, the 14 majors at the University of Southern Maine that suddenly ceased to exist this year, including geoscience and New England studies. Fifty faculty members -- about one out of every five or six on campus -- are gone too.)

More philosophically, this shift from public to private investment changes the nature of the relationship between students and colleges, McGrath suggested. "Students see their education as a product they're buying, instead of a service they're receiving."

Even more importantly, the disinvestment of states from state education muddies the mission of these institutions. Without public funds, what makes a public university public? There were good reasons that federal lawmakers created "land-grant" universities in 1862 and passed the G.I. Bill in 1994 — college was universally recognized as providing an equal opportunity for all citizens to get ahead, to get jobs, and to contribute to the nation's well-being.

"The tremendous growth of U.S. democracy, industry, and class mobility during what we have come to call the 'American Century' was fueled by a system that allowed large numbers of regular people to go to college in places like Berkeley, Austin, Charlottesville, Madison, and Seattle and get access to the same world class curriculum, faculty, and facilities that rich kids in the Ivy League took for granted," wrote United Faculty of Washington State President Bill Lyne in NEA's Thought & Action journal.

But Lyne notes the privatization of public education is rampant — and he predicts its consequences. "As publicly funded public universities and colleges continue to disappear, the wealthy [will] continue to have access to the best education in the world, while everyone else gets something that continues to fall further and further below the standards of most other industrialized countries in the world."

These governors, of course, will say it's all about balancing their budgets. And it's true that Wisconsin faces a $650 million budget shortfall -- but it's also a fact that Walker and his supporters created that shortfall with $2 billion in tax cuts. And, even as Walker has proposed $300 million in cuts to higher education, he also has called for a $220 million public donation to the Milwaukee Bucks to build a new team arena.

Same story in Louisiana. After years of increasingly reckless tax cuts and daring raids on reserve funds, Gov. Bobby Jindal is looking at a $1.6 billion budget hole. Now he wants to cut another $300 million from the higher ed. And, in Kansas, Gov. Sam Brownback's tax cuts have cost the state a projected $5 billion in revenues. It's no surprise he wants to cut another $45 million from public education.

"Unfortunately, some Kansans have grown so tired that they’re leaving. A kind of exodus has started,an outward migration according to the Census Bureau. Not only has this been covered by the media, but it is also evident to me as I watch good people leave Kansas, friends and colleagues, core faculty leaving or looking for work elsewhere," wrote Gregg Primo Ventello in "Brownbackistan," a recent article in NEA's Thought & Action.

In Illinois, the situation also is more complicated than it seems. Yes, the state has a shortfall -- it needs $760 million to make it to the end of the fiscal year. But it's also losing $2.1 billion this year in tax revenues, thanks to expiring taxes that lawmakers have refused to extend. 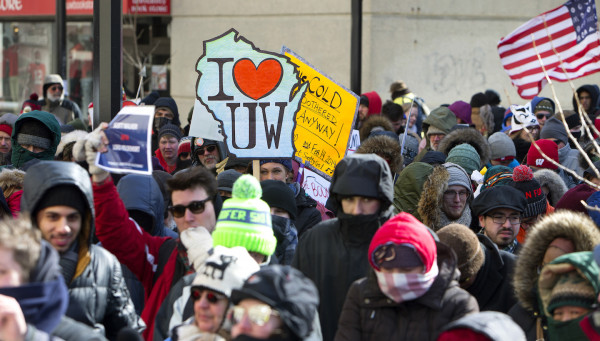 Protesters attend the The "Stop the Cuts-Save the University of Wisconsin" rally in Madison, Wis. on Feb. 14, 2015. (AP Photo/Wisconsin State Journal- Steve Apps)

"If I had Governor Rauner in a room and I wanted to argue this, I'd like to ask, 'okay, you're saying you need $400 million cut for colleges, but what's the payoff?' I don't think it's about education. I think the payoff is political. And it's the students who pay the price, literally and figuratively," said McGrath.

It doesn't have to be this way. Since the recession ended, a majority of states have begun to re-invest in higher education. In these places, governors understand that these investments can actually help revitalize their economies and also improve the lives of citizens. A recent report from the Campaign for the Future of Higher Education (CFHE) pointed to four states, in particular: Washington, California, Minnesota, and Massachusetts, where energetic coalitions of student, faculty and staff unions, and state legislators are working together.

In Washington, faced with a proposed state budget that would have cut the number of college classes offered and increased the amount of time it takes students to graduate, state legislators opted to close a corporate tax loophole instead. And, in Massachusetts, the state budget actually returns the university system to the old "50/50" system, where the cost of higher education is borne equally by students and the state.

These proposed budget cuts in Wisconsin, Illinois and elsewhere are clearly not just about money. In Wisconsin, Walker's budget proposal also includes edits to the mission statement of the heralded university system, deleting the parts about its efforts to "search for truth" and "extend knowledge," but adding "to meet the state's workforce needs." After statewide protest, his office subsequently claimed it was a "drafting error."

But the message was clear: "He just doesn't value higher education," said Hall.