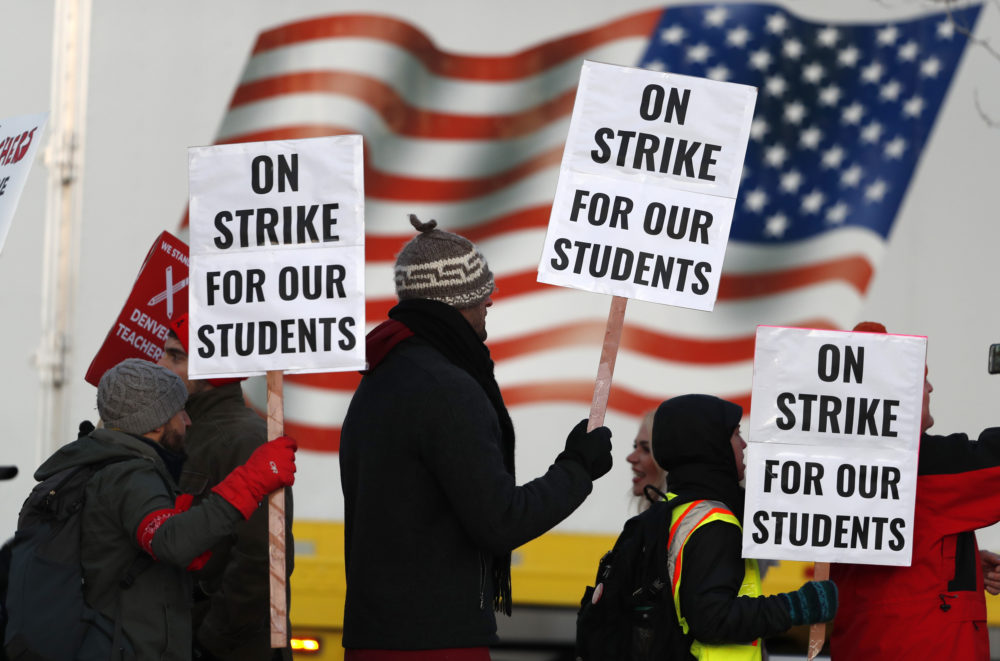 Teachers carry placards as they walk a picket line outside South High School early Monday, Feb. 11, 2019, in Denver. The strike on Monday is the first for teachers in Colorado in 25 years after failed negotiations with the school district over base pay. (AP Photo/David Zalubowski)

Update: The Denver Classroom Teachers Association (DCTA) bargaining team reached a tentative, historic agreement late Wednesday night, and many returned to the classroom Thursday. The agreement, which must be ratified by members, replaces the previous reliance on unstable bonuses with a clear and transparent 20-step salary schedule that includes a 7 to 11 percent increase in base pay, plus cost of living raises and the opportunity to earn more through professional development. "“This agreement is a win, plain and simple: for our students; for our educators; and for our communities,” said DCTA President Henry Roman, an elementary school teacher. “No longer will our students see their education disrupted because their teachers cannot afford to stay in their classrooms."

After 15 fruitless, frustrating months at the bargaining table, Denver teachers and education support professionals went on strike Monday, in an all-out effort for a fair, transparent, and professional salary plan that pays all teachers a living wage at the base level.

“For 15 months, we have shouted this injustice from the rooftops, but the district has chosen to ignore us… We have been saying for a year, ‘Our students deserve teachers who can afford to stay in Denver. Our teachers and SSPs [specialized service providers] deserve predictable, livable salaries,’” said Denver teacher Rachel Sandoval.

“You chose to ignore us for 15 months—but can you hear us now?”

“Let me tell you..the union is your power,” Eskelsen García told DCTA members. “The power of this union is to love somebody else’s child, to care about the future of Denver public schools. You should be so proud of yourselves! You are going to win!

This is the first teachers’ strike in Denver in 25 years, and it follows #RedforEd strikes and rallies last year in West Virginia, Arizona, Oklahoma, Washington, Alabama, and elsewhere, and a six-day strike last month by the United Teachers of Los Angeles that led to class-size reductions, limits on testing, and increased access to school nurses, counselors and librarians.

“I’ve been to West Virginia, Oklahoma, Arizona. A couple of weeks ago, I was in Los Angeles. You are a little bit unique here in Denver. Here you’re saying, ‘Can I just know what I’m going to be paid?’” said Eskelsen García. “But let me tell you what you have in common. You’re part of a powerful national movement, and what I’ve seen across the country, from the poorest rural communities in West Virginia to the inner-city of Los Angeles, I have seen people who have worked, in good faith, and been ignored… and they’re taking their voice to the people.”

In Denver, much of the problem stems from its commitment to a complicated, unique-to-Denver pay plan called Professional Compensation System for Teachers, or ProComp. Started in 1999, ProComp aims to use salary bonuses to reward teachers for performance. But the bonuses have proven to be unpredictable and confusing, and overall pay remains low—even as Denver becomes one of the most expensive places to live in the U.S. 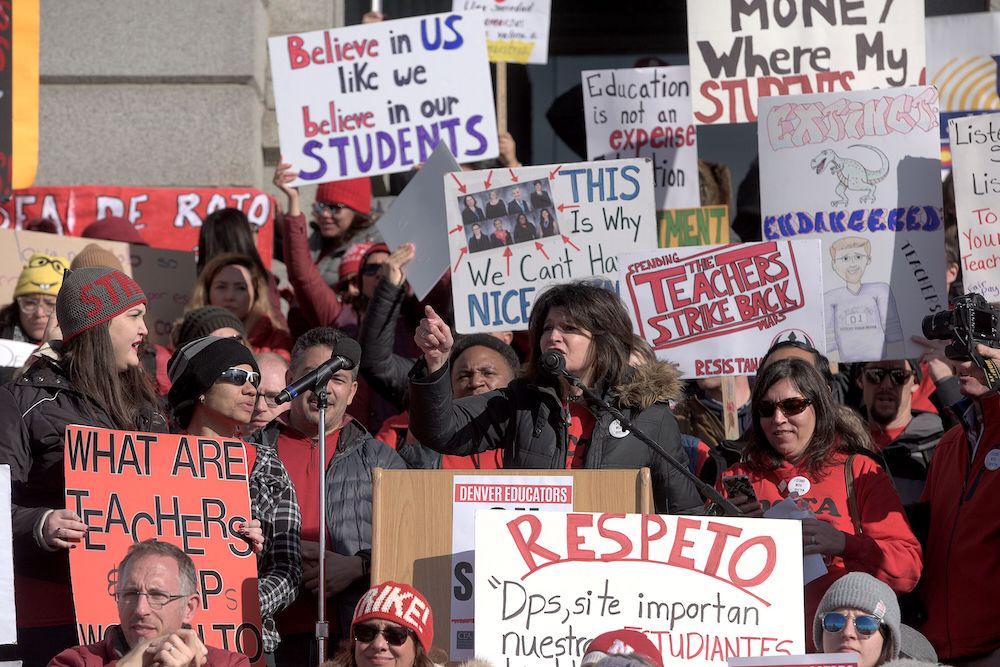 As a result, too many Denver teachers are leaving their students and classrooms to go to higher-paid districts nearby, or leave the profession altogether. This kind of teacher turnover is harmful to their students, union leaders point out.

“Bonuses have not proven effective, and our students are paying the price,” said DCTA President Henry Roman. And yet, said Roman and DCTA lead negotiator Rob Gould, DPS has refused to accept the union’s proposals at the bargaining table, which would fix ProComp.

Consider DCTA member Katie McOwen, a sixth-grade math teacher who also nannies during the summer, who told CNN this week that she’s moving into a friend’s basement at the end of this month to save money. She drives a nearly 20-year-old Honda with 310,000 miles, and says, “I know if something really happens, I will be in big, big trouble.”

On Tuesday, the union’s bargaining team and a DPS team return to the negotiating table. “Bring us a proposal tomorrow that has a fair, transparent, and competitive salary schedule, that prioritizes base salary over bonuses that disrupt our students’ education!” said Baca-Oehlert. “Settle this contract now, so that we can go back to doing what we love, to our students who we love!”