Schools are being urged to start later so students get enough sleep to learn and stay healthy. Researchers say high school shouldn't begin until 10 a.m.

“Early to bed, and early to rise, makes a man healthy, wealthy and wise.” This well-known proverb, say scientists from the University of Oxford, Harvard University, and the University of Nevada is only helping to make students' lives miserable. The conventional wisdom that going to bed early and getting up early leads to productivity and success is, in the case of teenagers at least, simply wrong. Paul Kelley, Steven Lockey, Russell Foster and Jonathan Kelley argue that letting students sleep and starting school later can lead to better health and academic outcomes.

Unfortunately, concerns about lack of sleep often get the brush-off from schools and even some parents who are quick to blame inattentiveness in school solely on teen behavior, laziness, general indifference, or all of the above. If only they went to bed earlier, concentration and attentiveness would improve. But in their report, the researchers say that schools are ignoring adolescent biology and are "systemically restricting the time available for sleep and causing severe and chronic sleep loss."

They're not alone. The chorus of voices in favor of schools starting later has been getting louder. In August, the Centers for Disease Control (CDC) issued findings that lay out a stark and sobering picture of how sleep deprivation harms teenagers, a common problem among high school students especially. Adolescents who don't get enough sleep (CDC recommends 9-10 hours) have an increased risk of being overweight, suffering depression, and struggling academically.

Less than one third of U.S. students, however, are sleeping at least 8 hours on school nights and four out of five middle and high schools start their day before 8:30 a.m. A consensus has emerged among health experts that this is simply too early. 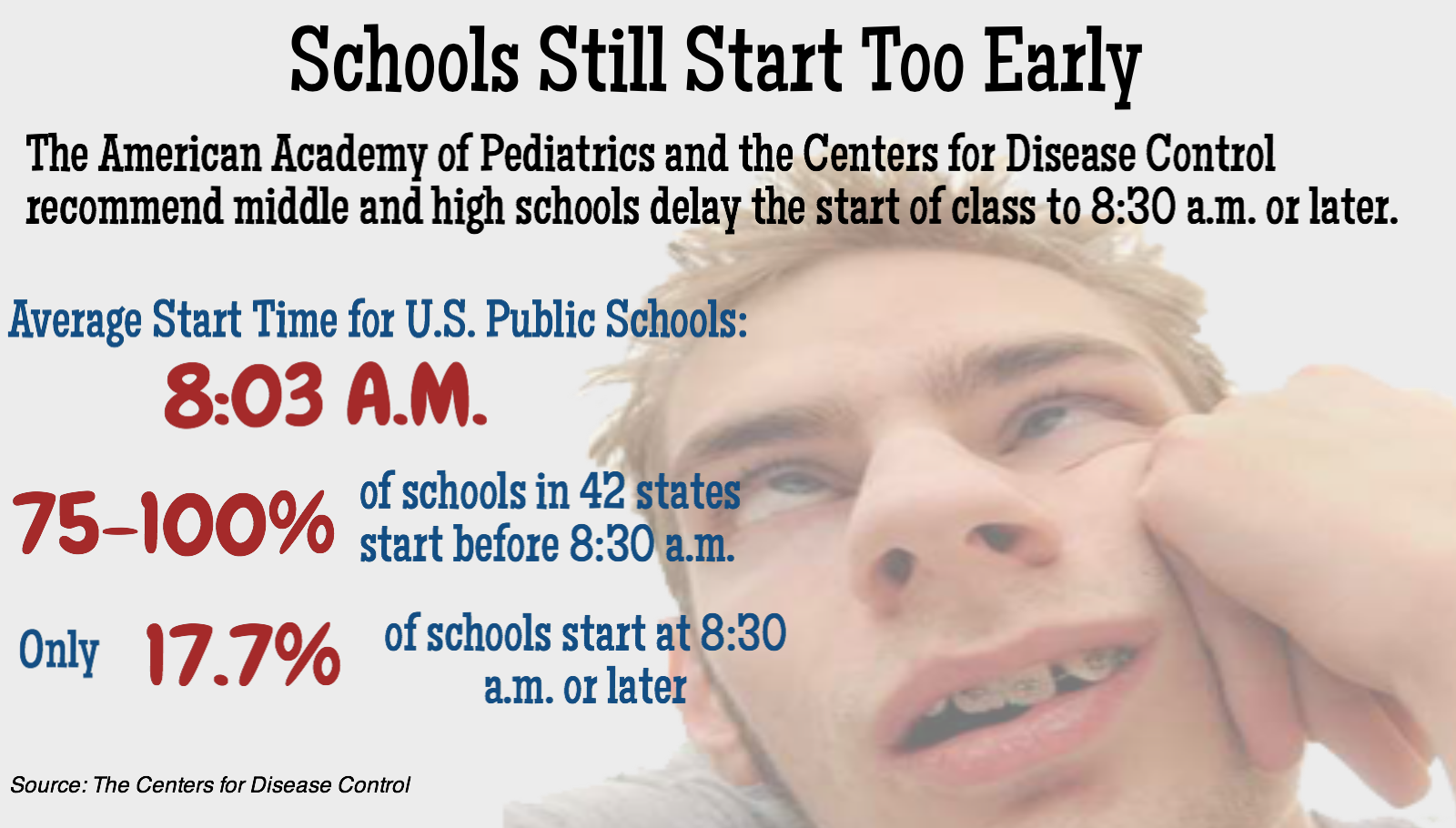 In 2014, the American Academy of Pediatrics (AAP) recommended middle and high schools delay the start of class to 8:30 a.m. or later, necessary to align school schedules to the biological sleep rhythms of adolescents.

“Chronic sleep loss in children and adolescents is one of the most common – and easily fixable – public health issues in the U.S. today,” said Dr. Judith Owens, author of the AAP policy statement. "Delaying early school start times is one key factor that can help adolescents get the sleep they need to grow and learn.”

"The teenage body is nocturnal," adds Dr. Denise Pope of Stanford University's Graduate School of Education and co-founder of Challenge Success. "Their circadian rhythms are different from adults. So even starting school at 8:30 can make a huge difference."

Currently, only Alaska and North Dakota meet the 8:30 a.m. standard - barely. The average school start time in Alaska is 8:33. North Dakota is a couple minutes behind at 8:31. (Louisiana had the earliest start time - 7:40 a.m.)

In 2014, the University of Minnesota released a study that examined data from more than 9,000 students attending eight high schools in three states. The study found that attendance and academic performance in math, English, science and social studies improved at schools with later start times, while tardiness, substance abuse, and symptoms of depression declined. At Edina High School outside of Minneapolis - the first school in the country to shift to a later start (7:20 to 8:30 a.m.) - school counselors and nurses reported fewer students seeking help for emotional problems and physical complaints. Furthermore, 92 percent of parents in Edina said their teenagers were “easier to live with.”

As most experts urge schools to begin school later than 8:30 a.m., the Oxford and Harvard researchers up the ante and recommend 10 a.m., which they say properly aligns with the "biological wake-up time" of a typical 16-year-old. That would mean 6:30 a.m. for a 10-year-old, so school for them should start somewhere between 8:30 and 9 a.m. A college freshman should have his or her first class between 11 and 11:30.

This "relatively simple step," the researchers insist, is both practical and necessary:

The synchronization of education to adolescent biology enables immediate advances in educational attainment and can be achieved with a relatively simple step that does not require new teaching methods, new testing or large additional expenditure...Good policies should be based on good evidence, and the data show that children are currently placed at an enormous disadvantage by being forced to keep to inappropriate education times. 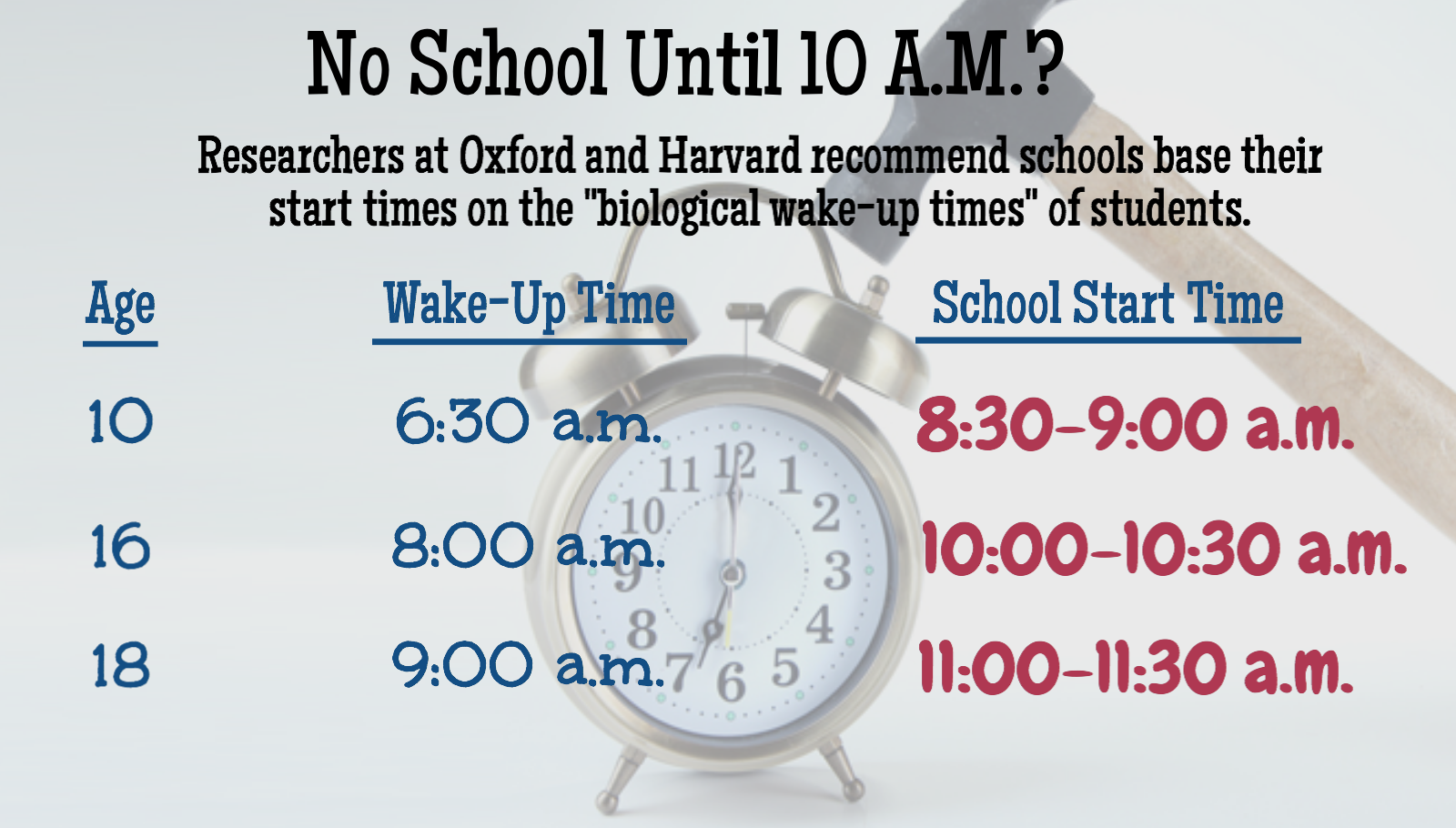 Kelley, Lockley, and Foster acknowledge that deep-seated and largely false assumptions about teen behavior and the benefits of waking up early are obstacles to the acceptance of later school start times. Still, not many districts would describe the move as a "simple step." Legitimate, practical considerations have to be considered - the impact on bus schedules and after school programs, for example -  and buy-in from educators, parents and the community is essential.

"Changing schools is hard, and getting schools to start as late as 9:00 or 9:30, when teenage bodies are actually only waking up, would be a tough sell," says Pope.  "But the best thing is to take it slow and look at how changing schedules affects everyone. It's not just the students. It's teachers, bus drivers, everyone at school, and especially parents. When multiple stakeholders are around the table, you can make effective change."