During a visit to a pharmaceutical company, she failed to mention that 650 current and retired teachers work there because they need the additional income. 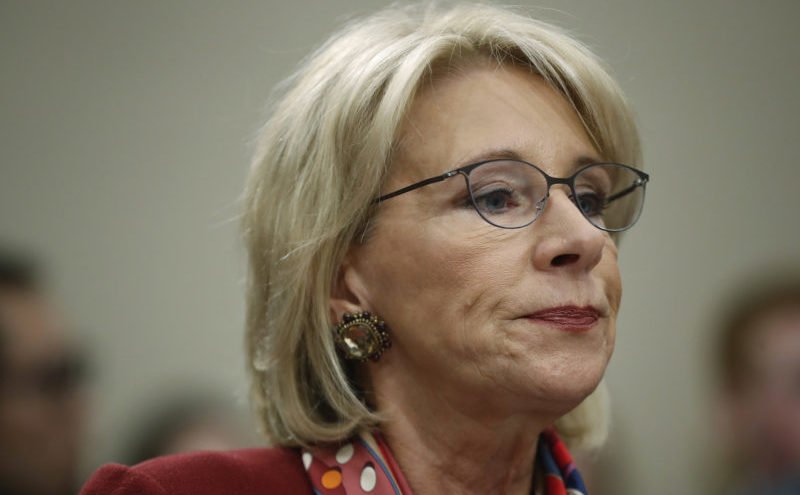 Secretary of Education Betsy DeVos demonstrated her apathy toward underpaid educators yet again during a visit to Nephron, a South Carolina pharmaceutical company, on Thursday.

While the purpose of DeVos’ visit was to call attention to a Trump administration initiative, “Pledge to America’s Workers,” she failed to mention during her speech that 650 current and retired teachers are employed at Nephron because they need the additional income.

Nephron is one of around 250 companies nationwide that have joined the Pledge to America’s Workers program.

As DeVos highlighted the initiative, which is intended to “educate, train, and reskill American workers from high-school age to near-retirement,” she ignored the reality that hundreds of teachers are forced to work part-time jobs just to make ends meet.

These teachers employed at Nephron are not working to reskill, but instead to keep themselves and their families afloat.

South Carolina ranks 48th out of 50 in states in terms of average starting teaching salaries, and 40th in average teacher salary. Due to these low wages, it is no surprise that many South Carolina teachers have had to take on second or third jobs to supplement their income.

Educators working multiple jobs are not unique to South Carolina; one-fifth of teachers nationally work more than one job.

DeVos also used her South Carolina visit to hold a round table discussion at Hidden Treasure Christian School to promote her signature voucher scheme. Like all voucher programs, DeVos’ plan would use taxpayer dollars to deliver funding to private and religious schools that are not held accountable to the public.

South Carolina public school educators have been vocal about the need for new investments in public education. At a major protest rally in May more than 10,000 educators, parents, students and other supporters called for educator salary increases, smaller class sizes, improved school conditions, and fewer charter schools.

Just days later, DeVos spoke negatively about the efforts of these educators, saying that they should protest during “adult time,” rather than during the school day.

DeVos’s apathy toward the financial hardship experienced by many public school educators—whether they are protesting on behalf of their schools and their profession, or working a second job—is just further evidence of how ill-suited she is to serve as Secretary of Education. Read more about her tenure.

“This is insulting to the inspiring educators who dedicate their lives to the children of South Carolina, and further illustrates how out of touch and unqualified DeVos is,” said elementary school teacher and NEA President Lily Eskelsen García.

“If we really are serious about improving public education, we need to ensure public school students have modern textbooks, art and music courses, nurses and counselors, and high quality educators in every classroom. Betsy DeVos’ has proven yet again that none of these are a priority for her or the Trump administration.”

Educators deserve a Secretary of Education who believes in the power of public education and is willing to stand up for educators working to improve their working conditions and students’ learning conditions.