Because teachers and education support professionals in St. Paul stood together, the school district knew the threat of a strike was even more credible. 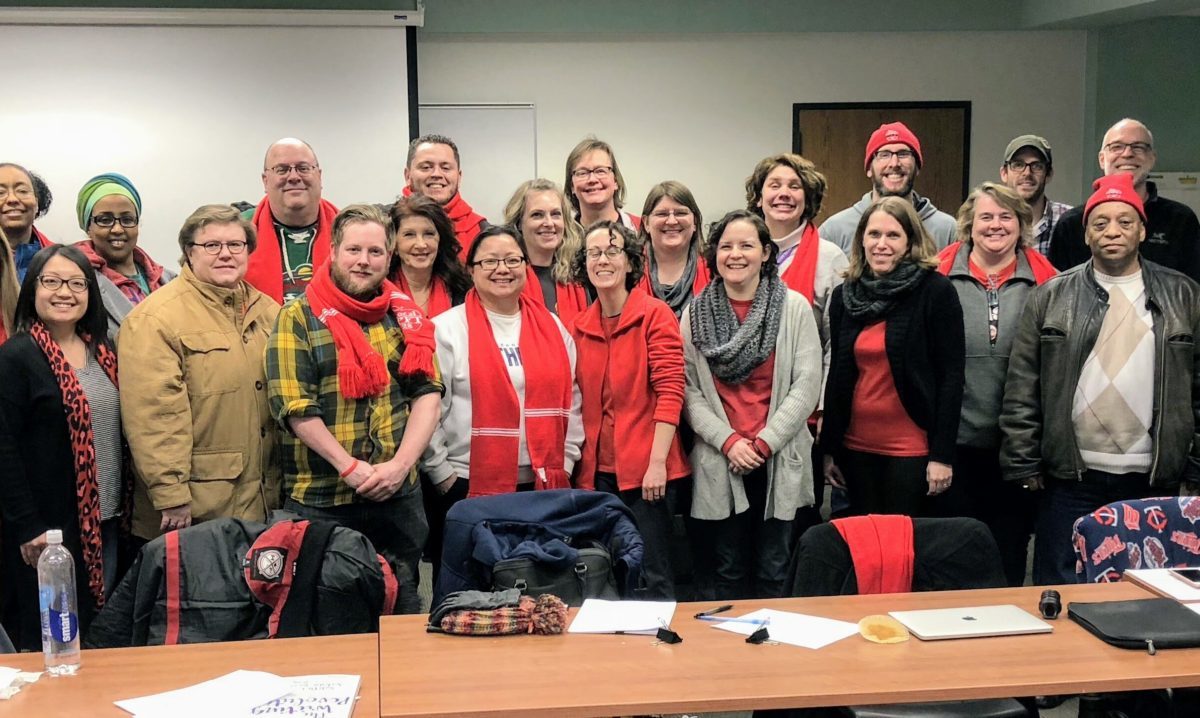 In December, the Educational Assistants (EA) and School and Community Service Professionals (SCSP) bargaining units of the St. Paul Federation of Teachers (SPFT) in Minnesota filed for mediations with the state at the same time as the unit comprising teachers and other licensed staff.

“The EA team finally received a date for a meeting approximately six weeks out, while the SCSP team didn't get a date assigned at all,” says Ellen Olsen, an ESP member of the bargaining team. “We feared that the district would give everything they had to teachers while we (ESP) would split the leftover crumbs.”

Having to beg for residual funds was indicative of a larger problem facing the union’s 400 EA and 150 SCSP members, according to Leah VanDassor, a teacher at Highland Park Middle School.

“While in a bargaining session, it was eye-opening and actually disgusting how some district representatives talked down to ESP members -- like they didn’t really matter or that their demands were entirely unnecessary,” VanDassor says. “I have not experienced that as a teacher on the bargaining team.”

On January 31, more than 85 percent of SPFT’s 3,600 members voted to strike if an agreement was not met in a week. The same night that votes were counted and ratified, executive board members voted to merge the three units into one bargaining team of 26 members.

“The district team was surprised and angry,” says Olsen, SPFT director of non-licensed personnel. “State mediators supported our legal right to choose our team, so the district had to negotiate our contracts together.”

After eight days of mediated talks, including more than 30 hours over a weekend, a two-year agreement through 2019 was reached and the strike averted.

“Because the bargaining teams stood together, our threat of a strike was even more credible for the school district,” says Patrick Burke, SPFT communications organizer. “The merger also highlighted how jobs in our public schools are connected.”

Says VanDassor: “We can now help each other become even stronger by learning how issues impact all three groups the same and differently.”

A member of the bargaining team, Sylvia Perez noticed that some school board members knew almost nothing about her duties as an SCSP or that of her colleagues -- behavioral specialists, cultural specialists, after school program coordinators, and other workers at the district’s student placement center.

“Some of them had no clue who we were and what we did,” says Perez, a cultural specialist at Crossroads Elementary School. “I think they now see our contributions more clearly. We are not invisible anymore!”

Until the merger, some teachers also admitted to not knowing these workers well enough.

“I didn’t really understand the SCSP perspective, nor how many different roles they play,” VanDassor says. “After the merger, we now better understand how our jobs align for students.”

Erica Schatzlein is vice president of SPFT and a member of the bargaining team. At Nokomis Montessori School, where she is a teacher, there are no SCSPs.

“Teachers as well as board members now know more about how we contribute to students’ educations. It takes all of us -- teachers, EAs, SCSPs, and other staff -- to nurture students and keep them safe.” - Sylvia Perez, Crossroads Elementary School

“A few years back, I didn’t know what issues our SCSPs faced in their daily work,” she says. “Bringing us together deepened our understanding of each unit’s work and interconnectedness.”

At the bargaining table, Schatzlein recalls how some board members responded to ESP issues.

“I saw firsthand how our EA and SCSP members were dismissed or pushed aside,” she says.

At one point, says Schatzlein, a district administration member said they wanted to settle the SPFT contract first, and then deal with EAs and SCSPs, implying that ESP members were an afterthought or somehow subordinate to other members.

“That use of language told me how my EA and SCSP brothers and sisters are sometimes viewed as 'others,' and not part of SPFT,” she says. “In fact, they are an essential part of our union.”

Says Perez: “Teachers as well as board members now know more about how we contribute to students’ educations. It takes all of us -- teachers, EAs, SCSPs, and other staff -- to nurture students and keep them safe.”

The decision to merge the three units unfolded against a backdrop of insulting treatment by school board trustees toward ESP members that went back to previous EA and SCSP contract campaigns.

“Our EAs and SCSPs negotiated good contracts, but they still felt disrespected by the school district, which waited until after teachers settled to finish negotiations with the other two bargaining units,” says Burke.

Talk of a merger “had been floated at the teacher table by SPFT organizers at the beginning of negotiations, but when we started talking about striking, EA and SCSP members on the bargaining team and the executive board forcefully advocated for the merger,” Burke says. “The vote by the board was the catalyst for the formation of a unified bargaining team, but it only came about because of the advocacy of our paraprofessionals.”

Teamwork at the Table

The new collective bargaining agreement includes guarantees to hire more student placement specialists (SCSP) and at least 13 of the 23 new support staff hired for special education students have to be educational assistants.

“Teachers testified strenuously about the difference for them and for their students when they work with EAs,” says Olsen, an interpreter for deaf and hard of hearing students at Focus Beyond, which provides transition services to students through individualized instruction. “We argued together and won the first intentional new hires of EAs in these settings that we've seen in years.”

After the merger, we learned how much we all have in common. ...Before, when we bargained alone, they (school officials) didn’t seem to listen to us. Now, the tone is different. Better. They know we are united and strong like a mountain.” - Yasmine Muridi, Four Seasons Elementary School

During the bargaining sessions, teachers commented on how student learning is diminished when, for example, some educational assistants are summoned by administrators to interpret conversations from parents who do not speak English.

“Bringing out examples like this built respect and trust for the respective roles we play in schools,” says Shela Her, a student placement specialist with the district. “We ended up bargaining for the common good … for better school conditions and more support for students.”

Yasmine Muridi is a language interpreter at Four Seasons Elementary School. She is categorized as an EA, which in other areas might be considered a paraeducator. The EA unit includes library aides, testing coordinators, aides for special education students, adult learning educators, before and after school care workers, language, deaf and hard of hearing interpreters. Licensed practical nurses are also categorized under the EA contract while registered nurses are organized under the licensed contract.

“After the merger, we learned how much we all have in common,” says Muridi, a native of Somalia who speaks four languages. “Before, when we bargained alone, they (school officials) didn’t seem to listen to us. Now, the tone is different. Better. They know we are united and strong like a mountain.” 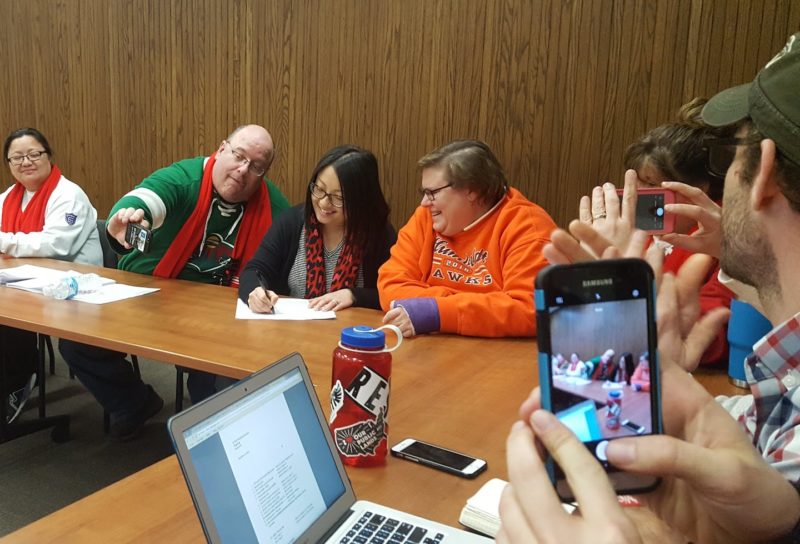 Shela Her signs the tentative agreement for the SCSP unit. “We ended up bargaining for the common good...for better school conditions and more support for students,” said Her.

On the heels of the agreement, SPFT and the district are working closer together seeking additional school funding.

“We are discussing a referendum for this summer and a door-to-door re-enrollment campaign to bring students back to our district,” says Burke. “We also will continue pushing for a payment in lieu of taxes (PILOT) program with large medical and higher education nonprofits and keep pressuring large corporations that avoid paying taxes to give back to our public schools.”

The PILOT campaign is related to SPFT’s TIGER Team (Teaching and Inquiring about Greed, Equity, and Racism), a coalition of parents, educators, and community members that is investigating how money has been removed from public schools to support private interests.

“The merger transformed us for the better,” says Olsen, an NEA board member. “We will not turn back.”