'Education is Political': Neutrality in the Classroom Shortchanges Students

Discussing human rights and equity should be welcomed in classrooms, not dismissed as "partisanship" or "politics." 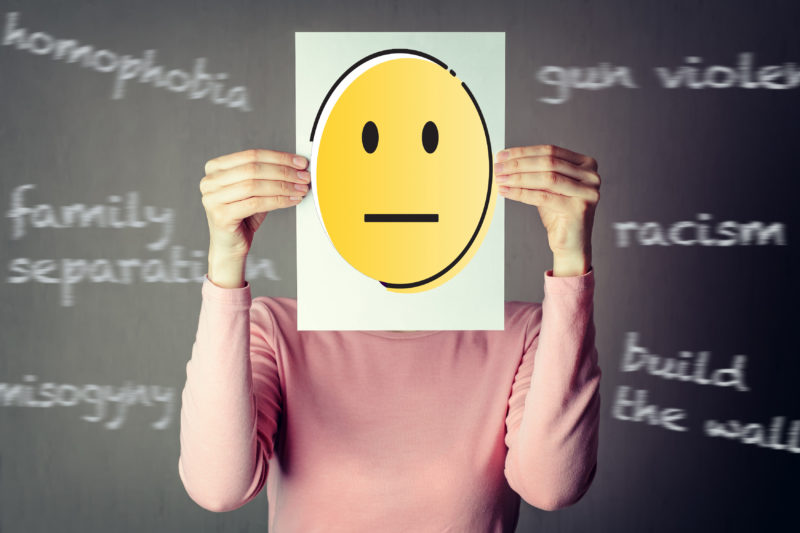 When teaching about U.S. elections or politics, many educators will strive for neutrality. They may insist these discussions have no place in the classroom, while others argue that standardization and a lack of time make them a non-starter. Even if there was an opening, the slightest hint of bias could attract the ire of an administrator or parent. In this hyper-polarized political climate, that's a line that’s easy to stumble across.

All this neutrality or avoidance may work for the teacher - but what about the student?

Alyssa Hadley Dunn, Assistant Professor of Teacher Education at Michigan State University, believes that a strict adherence to “neutrality” - not expressing your views to students and/or avoiding political topics - is a tactic that can actually marginalize many students.

Neutrality is itself a political choice, Dunn argues, and is one that bolsters the status quo. What results is a classroom that potentially ignores the fears, interests, and concerns of many students.

To be clear, Dunn is not talking about a teacher who stands in front of the class and reads aloud endorsements for local, state, and federal political office and then urges students to go home and tell their parents to vote accordingly.

The kind of neutrality that concerns Dunn is, for example, a decision to avoid discussion of “controversial” issues - racism, inequity, climate change, or gun violence, for example - out of fear of appearing political or partisan.

Education, at its core, is inherently political, says Dunn.

“Everything in education—from the textbooks to the curriculum to the policies that govern teachers’ work and students’ learning—is political and ideologically-informed,” she explains. “Both what is taught and how it is taught is shaped by the cultural, social, political, and historical contexts in which a school is situated. We can’t pretend that teachers can leave these contexts at the door.”

Especially after the election of Donald Trump.

Although political polarization didn't begin with his candidacy, Trump’s incendiary, crude, and divisive rhetoric about race, religion, gender, and immigration that marked his campaign (and his presidency) has been deeply unsettling to many, if not most, Americans.

"I don’t care what my school administration says. My loyalty is to my students and their lives, . . . not to administrator requests to avoid conversations that are uncomfortable.’’

According to a report by the Southern Poverty Law Center, the 2016 presidential campaign had a “profoundly negative effect on children and classrooms...particularly acute in schools with high concentrations of minority children.”

Yet, as Dunn and her colleagues Beth Sondel of the University of Pittsburgh and Hannah Carson Baggett of Auburn University concluded in a recent paper, many teachers continue to feel pressured to remain neutral when discussing Trump and are generally uncomfortable addressing racial and social justice issues in the classroom.

“This pressure (to stay neutral) is reflective of the lack of trust, autonomy, and professionalism for teachers in our current climate,” the study, published in the  American Educational Research Journal, concludes.

The researchers surveyed 730 teachers from 43 states to gauge how their pedagogical choices were affected after the election.

Some respondents made it very clear they did not adhere to what they saw as misdirected directives from school or district officials to stay away from anything Trump-related.

One middle school teacher explained that despite the fear many of his students had of deportation and harassment, “my school, tied by a never-ending desire to remain ‘unbiased,’ did nothing and told teachers to limit conversations about the elections because such conversations were not included [in the standards].”

“I don’t care what my school administration says," the teacher continued.  "My loyalty is to my students and their lives, . . . not to administrator requests to avoid conversations that are uncomfortable.”

Generally, however, responses from educators were littered with words such as  “fearful,” “anxious,” “unsure,” and “scared,” even as they acknowledged that a more engaged, proactive approach in the classroom may be necessary.

One educator from Massachusetts summed up the dilemma this way:

“Trump unlike any other presidential candidate stands for everything I work to combat: racism, sexism, homophobia and xenophobia. My students fall into categories of people he wants removed or controlled, in his America. I do not know how to talk to my students about this and be neutral (as per country policy).”

According to the study, teaching after the election was most challenging for those who were “ideological outsiders” - Clinton voters in areas where the majority of voters were pro-Trump and vice versa.

“Teachers had to negotiate if and how to talk about their own beliefs knowing that their students’ parents and/or colleagues may disagree with them,” Dunn says.

For example, an elementary teacher from a predominantly white school in Michigan explained,

“I always feel nervous explicitly discussing politics in my classroom due to the variety of views of my students’ parents and my own fear that parents will be upset or complain about me if my own views come up explicitly in classroom lessons/discussions. I know I have students whose parents supported both candidates passionately and I do sort of feel a responsibility to respect their parents’ views (no matter how much I may disagree).”

It doesn't help that so much of our discourse is labelled “political” or “partisan,” including discussions about human rights and social justice. Pedagogical choices, the researchers argue, should not be confined by this false construct.

“Making justice-oriented pedagogical choices is not about partisanship or controversy but, rather, is reflective of an overarching commitment to equity,” they write.

“Both what is taught and how it is taught is shaped by the cultural, social, political, and historical contexts in which a school is situated. We can’t pretend that teachers can leave these contexts at the door.” - Alyssa Hadley Dunn, Michigan State University

Anchoring discussions to a justice and equity framework can provide educators with a path forward. Still, many of the respondents in the survey did not feel particularly well-prepared to take this on, let alone publicly challenge the presumed virtues of a neutral classroom. The study concludes that teacher training programs need to better prepare educators in adapting their classrooms to help students understand current events and political upheavals. The researchers recommend that current teachers, especially those “ideological outsiders,” seek out networks across schools and districts that can serve as “restorative and supportive communities.”

While Dunn and her colleagues are careful not to downplay the pressures educators face, they emphasize that, ultimately, teachers are charged with preparing their students to work toward a more democratic society.

With 2019 and 2020 shaping up to be just as tumultuous as the previous few years, what are the chances more educators will feel empowered and better prepared to talk politics (for lack of a better word) in their classrooms?

Don't count on the administration to lead the way, at least not yet. “Districts are still issuing bureaucratic demands on teachers that take their time away from the most important thing they can do in the classroom: create responsive and relevant curriculum for their students,” explains Dunn.

And while too many parents still believe the classroom door should always be shut to any political discussion, they may be “ignoring the reality that such a move is never really possible,” Dunn says.

NEA EdJustice engages and mobilizes activists in the fight for racial, social and economic justice in public education.