The essential public school workers who are serving students throughout the pandemic are now being let go. 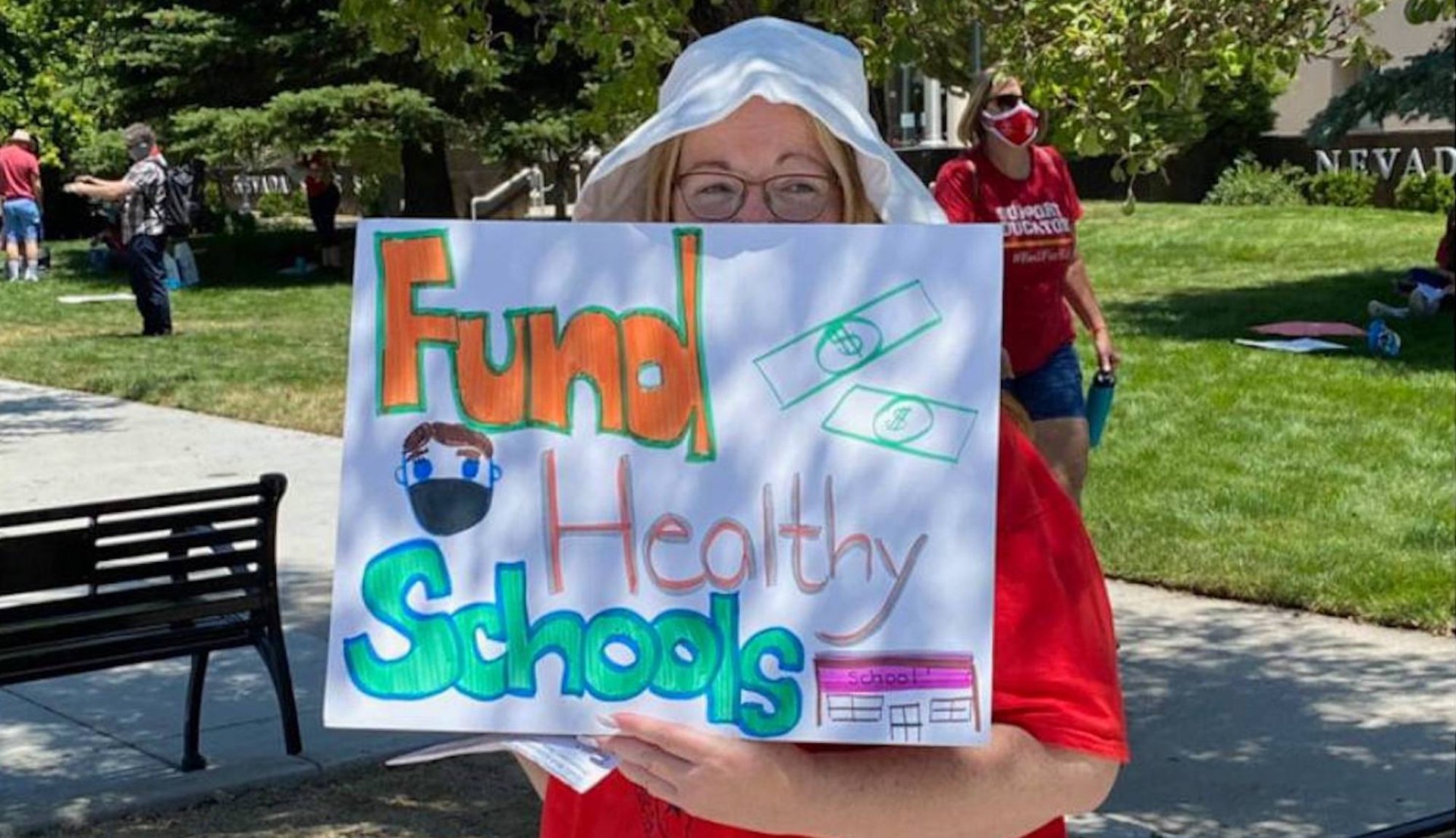 How do you keep a school disinfected when the district gets rid of custodians to save money? How do kids get to school when bus driver jobs have been eliminated? How do you support special education students when their paraprofessionals can no longer work with them? These are the questions education support professionals in Clark County, Nevada, and in other public school districts around the country are asking.

Another pressing question: Why do the people who earn hourly wages but keep a school running safely face job losses, while administrators who work in office buildings or the safety of their homes and earn six figures get to keep their salaries and positions?

“They’re trying to push a reopening plan but they’re talking about laying off the workers they need to get it done, it doesn’t make sense,” Jan Giles, President of the Education Support Employees Association (ESEA), told News 3 of Las Vegas.

Districts are losing revenue because of the pandemic, but cutting the low-wage earners at the bottom of the pay scale is a short-sighted, knee-jerk solution. Those who lose their positions now will have to scramble for other jobs to pay bills and keep food on their tables. When schools reopen, new employees will need to be hired and trained when the district could have found more creative ways to cut costs while saving jobs.

ESEA released the following statement in response to the proposal:

“ESEA is condemning any cuts on the backs of the essential employees that take care of our students every day and make sure that our schools and students are getting the best care to succeed. If cuts are needed ESEA expects CCSD to cut from top.”

A petition circulated by ESEA so far has more than 3,000 signatures. It states:

CCSD needs to start at the top, and work their way down. There is not a single Administrator or anyone making over $100,000 per year on the list for possible layoff. Instead, the employees that make as little as $12.90 per hour are the employees listed as potential cuts. These cuts will be on the backs of essential ESPs, and will overwhelmingly impact our minority community.

Clark County is one of dozens of districts where ESP jobs are threatened. News reports suggest many of the layoffs or furloughs so far have targeted bus drivers, custodial staff, cafeteria workers, and other support personnel. Such noninstructional staff, who nonetheless help create the conditions under which instruction is possible, account for about 30 percent of full-time equivalent jobs in U.S. elementary and secondary education, according to the U.S. Census Bureau’s Annual Survey of Public Employment and Payroll.

During the pandemic, the Whitesboro Central School District in Whitesboro, New York, furloughed 100 ESPs while the Willoughby-Eastlake schools in Lake County, Ohio, laid off more than 200 ESPs.  The Rochester City School District in Rochester, New York, let go the same number of support staff, after the district pulled a furlough offer which would have extended health benefits for the cafeteria, security, custodial, and other workers.

"The district should take care of their employees, especially the employees who were on the front lines, who were serving kids throughout this pandemic. The first wave of the pandemic,” said Board of Education Non-Teaching Employees president Dan DiClemente at a news conference. “They served kids straight through, putting their own health and safety at risk. And now the district is saying we don't value your health and safety that much."

At the University of Massachusetts Amherst, the two NEA-affiliated staff unions fought against layoffs this fall, filing charges with state labor officials in September that called the administration’s planned layoffs illegal (and unnecessary). The university “is rushing to cut jobs when that is not necessary… we have offered multiple [alternative] ways in which our members are willing to sacrifice,” said Risa Silverman, co-chair of the Professional Staff Union-Amherst. After the union’s charges were filed, administrators backed off, and negotiated with the unions to implement unpaid furloughs that enable UMass staffers to keep their health insurance and get unemployment benefits.

Protect Jobs for Those Who Protect Our Students

Andrea Beeman is a special education paraprofessional, NEA’s 2020 ESP of the Year and president of the Maple Organization Support Team in Maple Heights, Ohio. Along with her union leadership team, Andrea made sure that not a single one of her colleagues lost their job or had any reduction in hours.

She saw firsthand how much help her classroom and instructional specialist needed to conduct online learning, so Beeman went before the school board to ask that all paras in her district be able to participate in online learning, a motion that was approved very quickly.

But other ESPs in her district needed work as well, such as bus drivers who didn’t have students to transport and library media clerks who weren’t checking out materials for students in schools. Beeman was concerned that without the ability to return safely to face-to-face instruction and no action from the Senate on COVID-19 relief, her members would face more hardship in the fall with furloughs or RIFs.

She drafted a Memorandum of Understanding that would allow ESPs to continue working with assembling and distributing meals, learning packets and conducting wellness checks so that all job categories could keep their jobs at their regular rate of pay.

“In a neighboring district, support staff were all called into the cafeteria and told they weren’t needed any longer,” Beeman said. “We were very fortunate. We were able to keep our jobs.”

But it turned out to be a temporary stay and Beeman had to fight for the jobs yet again.

Just before Thanksgiving, local area school districts were recommended by the Cuyahoga County Board of Health to discontinue all face-to-face learning to decrease the rise in COVID cases in communities. Beeman’s district went to a full virtual learning model, and paraeducators and teachers were given the option to work from home, but she had to fight for the other ESP positions of members who cannot work from home.

“Maple Heights City Schools buildings remained open, and meal distribution would continue so many of those classification positions were secure, so our challenge was to ensure bus driver jobs were not subjected to lay-off,” she says. “We recommended that bus drivers continued to maintain school buses but also distribute technology, make phone calls, and conduct wellness checks. We were successful! All classifications are employed and have duties that continue to support student learning. The collaboration with NEA and OEA was instrumental in making this happen.”

If passed, the HEROES Act could keep hundreds of thousands of educators from getting pink slips while also providing continuity of the services upon which our students and communities depend. With our country and public schools facing serious financial challenges due to the COVID-19 crisis, Congress must prioritize dedicated funding to support public school students, educators, and communities in the next coronavirus relief package, not just billionaires and corporations.