Educators Across the Nation Give Back For the Holidays

Throughout the year, spreading goodwill, cheer and charity is all in a day’s work for NEA members, but during the holidays, everyone steps it up a notch. 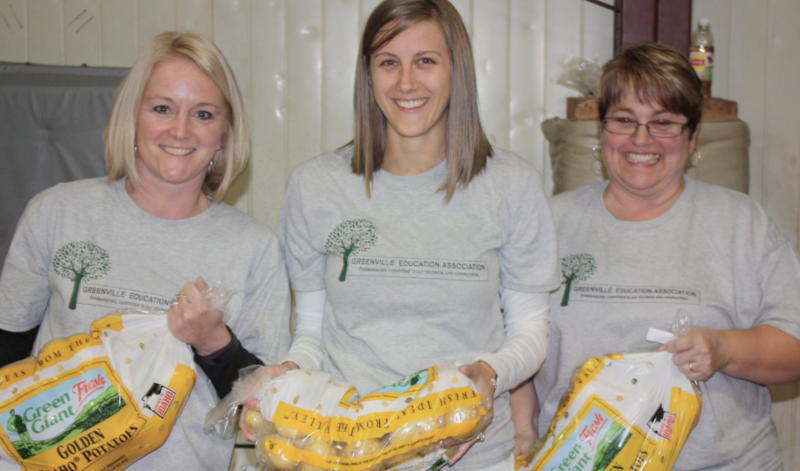 The secret Santa who drives a school bus for Gardiner Area Public Schools in Maine is confident that his hidden identity is safe from his more impressionable students. Surprisingly, even his teenage passengers resist breaking his cover as Father Christmas.

“Some of the older kids recognize me but don’t say anything because they don’t want their younger brothers and sisters to know too early about Santa,” says Leslie Crockett, a member of the Gardiner Bus Drivers Association (GBDA) who volunteers to appear as Jolly Old Saint Nicholas at local craft fairs, private parties, museums, and charity events.

“I enjoy it,” says Crockett, who also dons superhero and other costumes year-round on his bus and at school events. “It’s one way I give back to my community.”

Throughout the year, spreading goodwill, cheer and charity is all in a day’s work for members of the National Education Association (NEA). But during the holidays, members seem to step it up a notch by volunteering at food banks and clothing drives, writing checks to charities, and reaching into their pockets to buy toys for children in need.

“We’re more than bus drivers,” says Charles Wilson, GBDA president. “We converse with students every day, encouraging them to study hard and follow their dreams. During the holidays, we want all of them to have something under the tree.”

The local’s holiday spirit began in November when members raised $250 to buy Thanksgiving Day turkeys for less fortunate families. When members learned that a local supermarket chose to donate the turkeys in partnership, GBDA members used the funds to purchase gifts for students.

This year, the Oklahoma Education Association’s (OEA) chose a reflective approach to holiday giving. The Association is accepting nominations through December 10 to honor two OEA members whose immediate families have experienced a severe personal hardship over the last year. In collaboration with Galleria Furniture, the selected members will receive a living room set, Christmas meal, and gifts. This partnership began after a telephone call from a store manager to OEA Associate Executive Director David Williams.

“We’re more than bus drivers. We converse with students every day, encouraging them to study hard and follow their dreams. During the holidays, we want all of them to have something under the tree” - Charles Wilson, president of Gardiner Bus Drivers Association

“She said that Galleria was interested in doing something to help educators,” Williams recalls. The manager offered OEA members a 10 percent discount at several stores but also wanted to assist two OEA families in extreme need.

“In general, Oklahoma teachers have not had a meaningful pay raise since 2007-2008,” Williams says. The holidays can be a stressful time for many educators, particularly for those in states like Oklahoma, which ranks 48th in average teacher salaries, according to a recent NEA study.

“I think Galleria and other businesses know that educators are having a tough time,” Williams adds.

In Illinois, members of the Greenville Education Association (GEA) sponsored the service of the Central Illinois Food Bank’s Mobile Pantry, a large truck equipped with refrigerated bins and shelving for food items. After receiving an Illinois Education Association (IEA) grant, GEA arranged for the mobile pantry to visit Greenville Elementary School. Over the course of one evening in November, a small army of educators, students, and other volunteers assembled in the school gym and served almost 550 people from 170 households, including 215 children and 110 senior citizens.

"This was a great way to begin the holiday season," says Kristy Schaefer, a teacher at the school who wrote the grant.

Members of Greenville ESP Association (GESPA) also received an IEA grant to purchase Christmas gifts for area foster children. In collaboration with Foster Hope of Bond County, members wrapped and donated gifts to more than 100 children from 40 foster families. Both locals also participate in the district’s Weekend Backpack Program, which provides students from low-income families with backpacks filled with food items to help them stay fed on days they are not in school.

The Stanislaus chapter of the California Faculty Association recently donated $35,000 to the faculty's Campus Cares Fund. The donation will benefit the Student Emergency Fund and Campus Food Pantry as well as establish an endowment to support the fund. 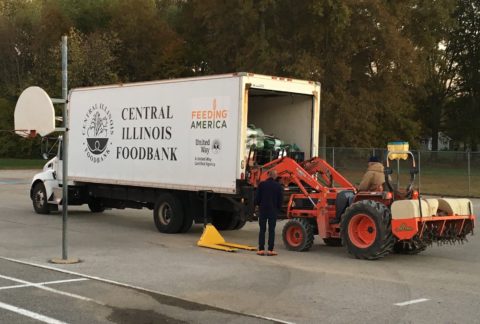 "We know students struggle to learn when they're worried about their utilities being shut off or when they skip meals because they can't afford food," says Professor Steven Filling, chapter president.

Members of the Traverse City Transportation Association (TCTA) in Michigan set up their “giving tree” in the bus lounge. Instead of ornaments, the tree’s branches are decorated with index cards containing suggested gift items for certain needy families.

“Bus drivers and aides will pick a card and purchase gifts for that family,” says TCTA bus driver Marti Alvarez. “We recently had a family with three children lose their home to a fire. So we are planning to help them with food and gifts over the Christmas holidays.”

TCTA members also volunteer at a food pantry operated by Traverse City Area Public Schools, and help with Blessings in a Backpack, a program that distributes food-filled, new backpacks to disadvantaged students.

“We may not directly see who is donating and preparing the bags for the kids, but we do see where it ends up once it leaves generous hands — in the little hands of one of our less fortunate students,” says Alvarez.

Since 2005, TCTA members have raised more than $40,000 through its Transportation Humanitarian Fund. The fund has helped families purchase gas and grocery cards from retailers, avoid the foreclosure of houses, and pay for car repairs, electric and heating bills.

“The fund also helped us build a ramp for a disabled student and pay plane fare for a daughter to visit her dying mother,” says Alvarez. “All we ask of the recipients is to pay it forward by helping others through volunteering.”

In November, most of TCTA’s 100 members participated in the Warm Toes Sock Drive by donating funds and collecting packages of new socks from parents at bus stops. Almost 1,100 pairs of socks were collected to help students from low-income households. An earlier drive in March produced 4,300 pairs of socks.

In the Gardiner school district, Wilson, Crocket and other drivers are involved in an anonymous altruistic endeavor. As such, a principal gives drivers the age, gender, and clothing size of a student whose family cannot afford gifts.

“We don’t get a name,” says Wilson. “Each of us will buy gifts for the assigned student, and the principal will deliver them. Hopefully, when they get older they will help someone.”