Fed up with hearing that reducing class size is too expensive, educators and their allies know the cost of inaction has been much worse. 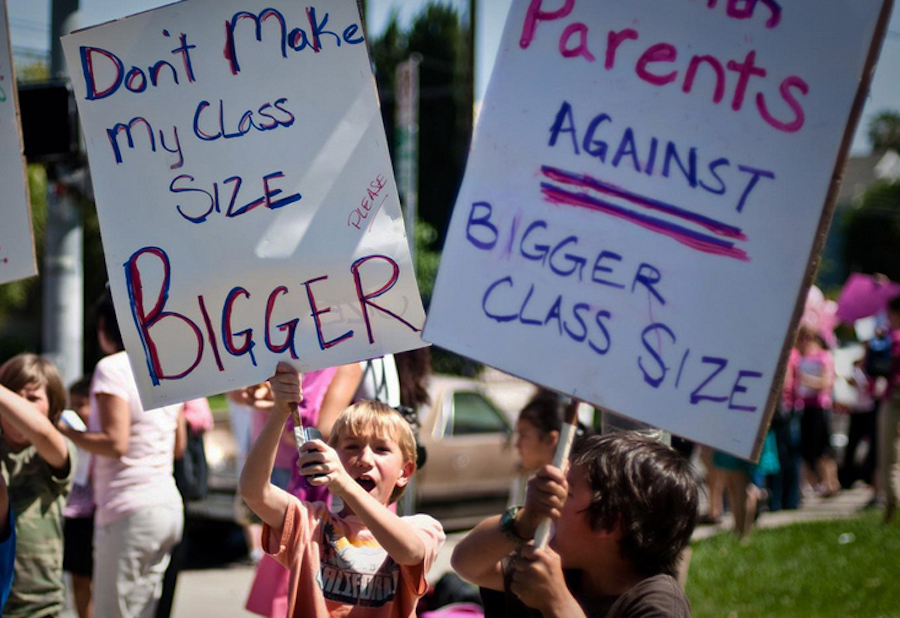 Earlier this month, Rebecca Segal, a kindergarten teacher in Milwaukee, walked into her classroom, counted the number of students in front of her, and thought to herself, "This is going to be a great day."

Typically, Segal teaches around 30 kids, but a blizzard and frigid temperatures, while not severe enough for an official snow day, kept more than half her students at home. With only 12 kids in her classroom, Segal knew right off the bat that things were going to be different.

There would be more time for hands-on activities, more one-on-one interaction, a generally slower more focused approach that wasn't really possible with a class of 30 students or more.

"I physically felt calmer and more comfortable and they did as well," Segal recalls. "Behavior is handled much more fluidly when you can give kids the attention they need. I remember thinking , 'Wow, this must have been what it was like back in the day'!"

When the bell rang at 3 o'clock, Segal's heart sank a little. For only eight hours, she and her students got to experience how things should be but aren't.  "I was sad because even if it were to change and class sizes became smaller, the kids I have now won't see it. But that's what every student deserves."

Nevertheless, Segal is heartened by the reemergence of the class size issue, particularly the strength educators have shown across the country in forcing policymakers to confront the problem. Many state legislatures - thanks in large part to the influx of new pro-public education lawmakers generated by the 2018 elections - are finally taking it up. Most notably, the recent 6-day teacher strike in Los Angeles led to key concessions by the district in capping that city's absurdly large class sizes. 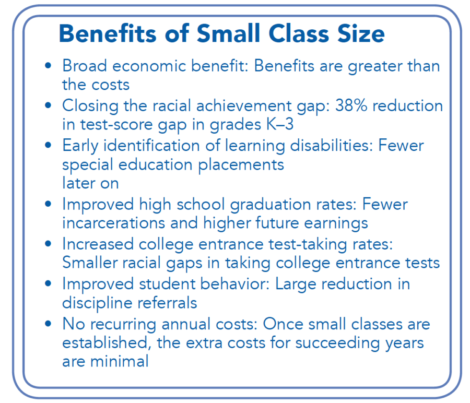 It didn't start in California. Calling for reduced class size has been a centerpiece of the #RedforEd movement that began last Spring. After years of being told the number of students in a classroom didn't matter or that it was just too darn expensive to fix (or both), educators, students and parents have had enough.

The school funding crisis, says NEA President Lily Eskelsen García, is a “man-made crisis.” Lawmakers created it and that they can fix—if they choose to.

Reducing class size is expensive, but...well... so what?

Class size matters and is therefore worth the investment, says Bruce Baker, a professor at the Graduate School of Education at Rutgers University.

"The things that cost money benefit students," Baker writes in Does Money Matter in Education? "Ample research indicates that children in smaller classes achieve better outcomes, both academic and otherwise, and that class size reduction can be an effective strategy for closing racial and socioeconomic achievement gaps."

Educators are more than happy to talk about costs, but they've refocused the debate on class size squarely where it should be: on the costs to our students if no action is taken.

'A House Party, Not a Classroom'

After her day with only 12 students ended,  Rebecca Segal reflected on her experience and decided to share her thoughts on social media.

"For me it was just a cathartic Facebook post, but I really wasn't prepared for the response. It really struck a chord. I guess I shouldn't have been surprised because we all want to talk about this issue."

A music teacher described in detail how too many students in one classroom makes individualized attention virtually impossible.

I’ve had as many as 38 in previous districts. My current has been 31 at times. The worst part of it is that I’m a music teacher, which means teacher’s aides get their preps during my class and their students come without them. I have aides for profoundly disabled students, but inclusion students with 1:1 help on their IEPs don’t have access to them during my class. It’s terrible for them and for the other students in the class, because it often impacts behaviors. Too large class sizes, not enough aides, and not enough respect for the “specials” classes to even consider it a problem that needs to be fixed. We’re being cut off at the knees!...We’re failing them with our large class sizes. It’s not teachers doing a bad job, it’s decision makers making it impossible to do our job effectively.

A 4th grade teacher has fewer students this year and doesn't want to go back:

I had 35 fourth graders last year. I could hardly work with any small groups or give one on one attention. Grading work and analysis of formative assessment was nigh impossible. And we do not have release time such as PE, art, music, etc because we classroom teachers are expected to teach those on our own. I was at work until at least 6 PM daily! I have 27 kids this year which is much better.

If you ever wondered why teachers care so much about class size, here’s what a class looks like with 15 students all the way up to 45 students. #RedForEd #classsize pic.twitter.com/WbAVRtMnc8

An English Language Arts teacher says fitting all her students in one classroom was a challenge:

As a first year ELA teacher of 9th graders. I once had a class with 39 students! The class was also an inclusion class with several students who had behavioral improvement plans. I literally didn’t even have space for all the students! It was more like a house party ... not a classroom!

This educator crossed Los Angeles off her list when she asked about class size:

I interviewed with LA when I was looking for my first teaching job back in 2003. My first question was about class size. They replied no less than 35 (for fifth grade). I was fresh out of college and knew my classroom management skills needed some work. I finished the interview, but I knew after they said 35 that I would not be moving there.

The impact large class sizes have on a district's ability to recruit and retain teachers tends is undeniable. In 2017, the Learning Policy Institute found that teacher turnover is lowest in states that offer higher pay, make greater investments in education, and support smaller class sizes.

This fact tends to get dismissed or ignored by those who have believe there's nothing wrong with larger class size that cannot be resolved by a quality educator. Hiring and keeping great teachers, however, is difficult obviously when larger class sizes increase teacher attrition. 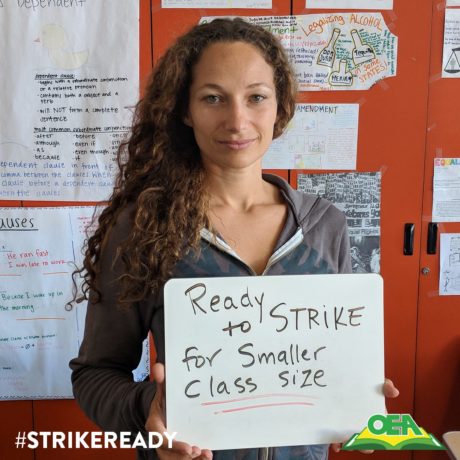 California ranks 48 our of 50 states in class size and Los Angeles has some of the largest in the state. Capping class size was a central demand in UTLA's contract negotiations with the district that eventually broke down in January. The subsequent city-wide strike of 30,000 educators forced major concessions. The district agreed to reduce class sizes in grades 4-12, and eliminate Section 1.5, a provision in the previous contract that allowed the district to cite "fiscal distress" to ignore class size caps.

Up north in the Bay Area, Oakland educators are also demanding smaller class sizes as they gear up for a possible strike. On February 4, 95% of the city's teachers, who have been working without a contract since July 2017, voted to authorize the action, which could begin if the district continues to reject their demands. The vote, said Oakland Education Association President Keith Brown, sent a "clear message that members are ready to fight for schools students deserve. It's a mandate for smaller class size, more student support and a  living wage."

On the class size issue specifically, OEA is proposing to reduce all elementary school classes by one student and all middle and high school classes by five students. These reductions would go into effect this year and then double in 2020.  Brown says these and other steps are critical to stem the teacher turnover crisis that has crippled the district.

As we saw in Los Angeles, community coalitions have been integral to OEA's campaign. Across the country, educators have a powerful partner in parents.

The voices calling for smaller class sizes are growing louder, says Rebecca Segal, and they're beginning break through.

"The fact that educators are willing to strike over class size is amazing and we have new leaders at the state level now who understand public education," she says.

"It's still a struggle, but we're not shouting into thin air anymore. We're shouting loud enough so that people are hearing and maybe will start to do something about it."