Educators and Students Have Privatizers on the Run, Says Ravitch

In her latest book, Diane Ravitch explains how efforts to disrupt and privatize public education are doomed to failure.

Diane Ravitch, former assistant secretary of education in President George H.W. Bush’s administration and NEA Friend of Education in 2010, has written a new book that she wants every public school educator to read.

In “Slaying Goliath: The Passionate Resistance to Privatization and the Fight to Save America’s Public Schools,” [Knopf: 2020] Ravitch explores how profit-minded billionaires like Sam Walton or Eli Broad—she calls them “disrupters,” never "reformers"—are behind large-scale efforts to squeeze public money out of public schools through a relentless focus on standardized test scores and failure. For many decades, it looked like they were winning. Not anymore. From West Virginia to Los Angeles, Ravitch’s book celebrates the growing rebellion of educators, parents and community members who are fighting for students and educators—and winning. Recently, she spoke with NEA Todayabout this work.

Let’s start with the title, “Slaying Goliath: The Passionate Resistance to Privatization and the Fight to Save America’s Public Schools.” Who here is Goliath?

Diane Ravitch: Goliath represents the people who have embarked on these really disastrous policies and funded them. You have to start with the government officials, and that means every president since George H.W. Bush, including Obama. They had this idea that you test and you test, and everybody will be proficient if you just test some more.

It really has changed little since Bush. Obama bought into it and [his Secretary of Education] Arne Duncan was an enthusiastic supporter. It’s been a bipartisan mess with Democrats equally implicated, including Rahm Emanuel in Chicago and Andrew Cuomo in New York. This has been the status quo for 20 years. They became infatuated with the notion that just measuring the problem will fix the problem. With this kind of thinking, the measure is the goal—when the goal really is a healthy, civic-minded, participatory citizenry.

You write in the introduction that you sat down to write this book at a pivotal time in public school history. What was going on, and how did it inform your approach to the book?

DR: I had no intention of writing this book. I write my daily blog  and that’s very satisfying. But then the West Virginia walkout happened, and I kept reading about it with absolute fascination.

I had long been encouraging people, saying ‘we have to keep fighting,’ but I didn’t see change happening. With West Virginia, things began reorganizing in my brain. I began to see the victories, adding up.

At the same time, the national media started treating teachers differently. A few years earlier, TIME magazine had [charter-school proponent] Michelle Rhee on its cover, holding a broom, with the headline “Rotten Apples.” I saw the national narrative totally change. They started publishing stories about teachers being paid so poorly that they had to work two or three jobs. I read one about a teacher who sweeps the mall at night. Can you imagine running into your doctor or dentist sweeping the mall at night for money? Teachers are professionals just like them.

Striking turns out to be enormously powerful. Where the strikes didn’t get everything people wanted, they got something—they helped organize teachers, and led to some teachers running for office. If that kind of activism keeps up, children will at last have representation."

What I wanted to do with this book is two things. First, pull together these victories and make people aware that the people fighting these fights are not losing. They are not being ignored. There are reasons to hope and to continue fighting for what’s right, which is a well-funded public school with teachers who are supported and know what they’re doing.

The second reason is to send a message to the people who have funded this stuff—the Waltons, the Gateses, the Broads. They have wasted a lot of money. There should be a great big, illuminated sign that flashes on and off, that says to them, “Loser! Loser!” I guess if you’re a billionaire—I don’t know because I’ve never been one—maybe the people around you never tell you that your ideas are terrible and that they don’t work. Well, this didn’t work, and I want them to know that.

One of the victories you describe is a local Colorado school board election, in which pro-voucher school board members, backed by big money, are ousted by a “dream team” of candidates backed by pro-public school parents. We pay a lot of attention to Betsy DeVos and her bad ideas, but is this where the battle is really happening—in local elections? Why do they matter?

DR: Because of the money involved, the crucial battles are being waged in local school board and state school board elections. [Pro-voucher] groups like Democrats for Education Reform have raised money for candidates in places as obscure as Perth Amboy, New Jersey. When you look at filings from these local elections, their candidates are coming up with $200,000, or more, in contributions. Local people can’t compete against that. One of the reasons that I write about [school board member] Amy Frogge in Nashville is that, as far as I know, she never got out-of-state contributions, and she was running against somebody with five times as much money. What’s so dangerous about this situation—what this is about really—is whether we’re going to have locally elected school boards, or boards elected by national organizations.

People need to know: it’s crucial to look at these campaign filings. In the book, I include a story about Massachusetts, where money from hedge-fund managers and Wall Street poured into a ballot campaign to lift the state cap on charter schools. It was critical to reveal that this was millions of dollars from people with no connection to Massachusetts. On the other side, there were no big supporters, except the Massachusetts Teachers Association. Its president, Barbara Madeloni, asked her members and they agreed to put in about $10 each. [Editor’s note: Parents and educators won in Massachusetts. Read more about it.] 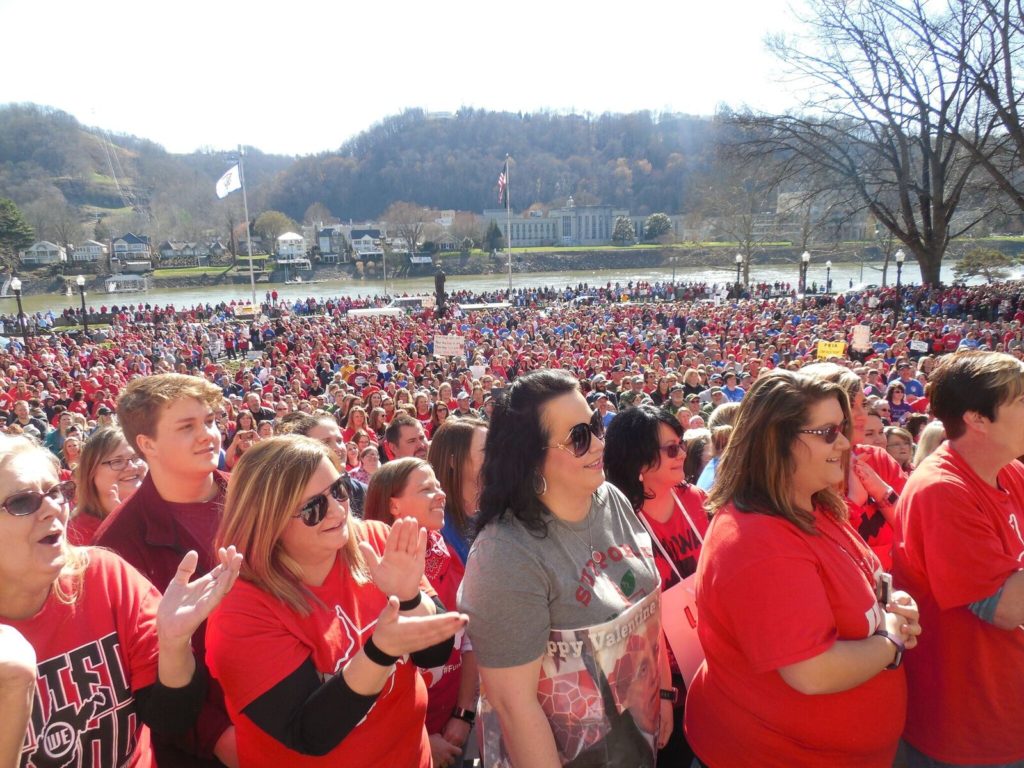 With the eyes of the nation on them, West Virginia teachers’ launched a historic nine-day statewide strike in February 2018.

In the chapter about the teacher resistance, which describes the statewide walkout in WV, followed by other #RedforEd walkouts and strikes, you conclude that “teachers learned that together they had power. And they would not forget that lesson.” We all hope that’s true! What is the role of unions in growing that power?

DR: I’ve never belonged to a union, but I’m a very strong believer in unionism. I think one of the reasons our society is in so much trouble is that we’re losing our middle class. We see this growing income inequality and wealth inequality, and part of that is because the far-right is so effective at killing unions. When I was on the other side—I call it ‘the dark side’ now—I kept hearing, ‘Unions are the problem. If we could get rid of them, we could get rid of the slackers who are apparently ruining schools.’ This anti-teacher, anti-union animus is inspired by ALEC. To learn more about it, the book I always recommend people read is Gordon Lafer’s, “The One Percent Solution: How Corporations are Remaking American One State at a Time,” which describes the state-by-state effort to wipe out unions.

Here’s what I say: You tell me that unions are responsible for low test scores, but show me the right-to-work state where test scores are through the roof! Mississippi’s fourth-grade reading scores have been in the news lately, but Mississippi has the highest third-grade retention rate in the nation. That’s an old trick straight out of Jeb Bush’s playbook in Florida.

What they’ve done with unions is try to make sure there’s nobody at the table to speak up for teachers and students and communities. If there’s a union, there’s somebody who will say, ‘you can’t do this, you can’t cut anymore.’

In conclusion, you write, “The great lesson of this story is that billionaires should not be allowed to buy democracy, although they are certainly trying to do so. The power of their money can be defeated by the power of voters.” What specifically is the lesson for NEA members?

DR: The big takeaway is that strikes work. When you have all these legislators with teachers in their corridors, and everybody is wearing their matching t-shirts and they’re saying we need more for the children of this state, and constituents are calling and saying for god’s sake settle the strike, you suddenly create this whole counter-pressure [to the influence exerted by big-money donors and "disrupters"]. Striking turns out to be enormously powerful. Where the strikes didn’t get everything people wanted, they got something—they helped organize teachers, and led to some teachers running for office. If that kind of activism keeps up, children will at last have representation.

This is where unions fit in. Teachers are fighting for funding for children. They’re fighting to get decent teachers at a time of a national teacher shortage. The typical right-wing thinking is that teachers are only in it for the money. Right! Anybody who believes that is either a liar or insane.