NEA President: "Educators know President-elect Biden and Vice President-elect Harris are tireless advocates for public education and they are the partners students and educators need in the White House." 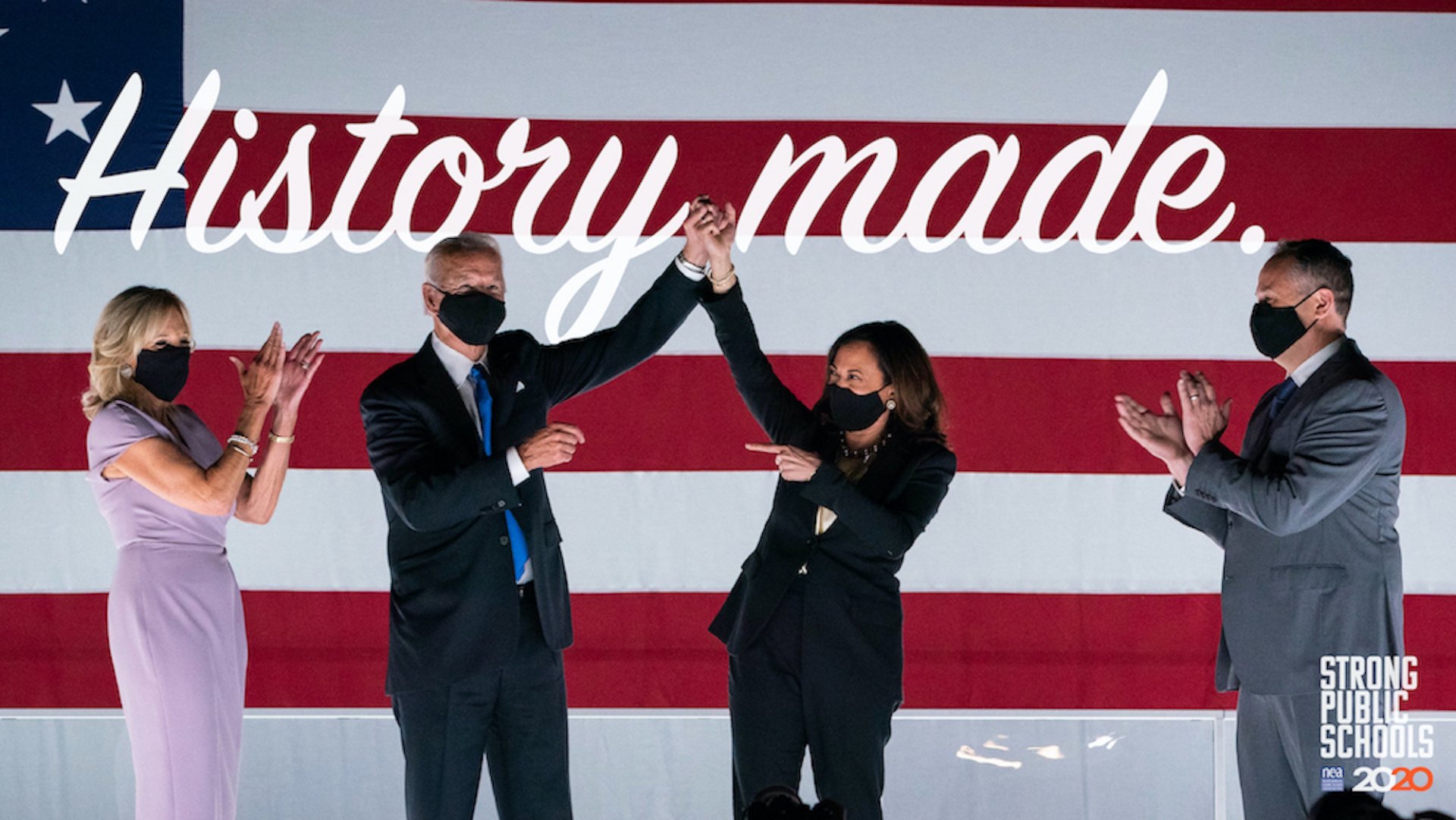 For educators, today is a time to celebrate the historic election of Joe Biden and Kamala Harris, along with other critical wins for public education and students across the country. It is also time to reflect on the strength of our voice and the actions we took to preserve our democracy.

In the face of a global pandemic and in spite of a constant flow of disinformation meant to suppress votes, educators made their voices heard and helped others in their communities to safely cast ballots. Participation in NEA’s election activism programs saw nearly a 50 percent increase over 2016 levels, with nearly 230,000 members volunteering through their association.

Those efforts resulted in wins up and down the ballot, and helped achieve the largest voter turnout in modern history. Roughly 160 million ballots were cast, and Biden and Harris received the largest number of votes of any presidential ticket.

Educators are also celebrating Vice President-elect Kamala Harris’ smashing the glass ceiling as she becomes the first woman, first Black woman, and first person of Indian descent to be elected to national office. Hers is an achievement not only for the history books, but one that will inspire countless students by showing them that regardless of gender, race, or ethnicity, they too can hold the highest offices in our country.

“Across the nation, educators and students are celebrating this victory for public schools and communities,” said NEA President Becky Pringle. “No matter where we’re from or what we look like, we all want students to have great public schools. Educators know President-elect Biden and Vice President-elect Harris are tireless advocates for public education and they are the partners students and educators need in the White House.”

Biden and Harris have shown time and again that they believe in public education and will listen to educators as we work together to battle the COVID-19 pandemic and emerge from the crisis a more equitable nation. With Dr. Jill Biden, an educator and longtime NEA member, as First Lady, educators will even have a colleague in the White House. Not since Eleanor Roosevelt has America’s First Lady been a union member.

Educators’ hard work to make this day a reality started long before the 2020 election cycle began. Over the last four years, NEA members have taken heroic action to stand up for their students, their profession, and their communities. Millions of educators rallied under the #RedForEd banner for school funding and educator pay equity, denounced the confirmation of Betsy DeVos as secretary of education, and volunteered for pro-public education candidates. Thousands of educators ran for officeand won in the 2018 midterm elections.

The past few years have seen unprecedented levels of political activism by public school educators.

Educators also spoke out about the failure of U.S. Senate leaders under Mitch McConnell to adequately fund public education, both before and after the COVID-19 pandemic hit.

Then educators channelled their #RedForEd spirit into the 2020 elections, educating others in their communities about what was on the line for their public schools in local, state, and federal elections. Once the pandemic made face-to-face canvassing potentially unsafe, NEA helped educator-activists pivot quicklyto learn new digital organizing platforms, and ramp up their phone and text banking skills for safe and effective voter outreach.

These are just some of the stunning wins in the 2020 elections that resulted from years of political activism and organizing by educators:

The Biden-Harris campaign has shown, through detailed plans that prioritize public education and racial and social justice, that they understand what is needed to keep our students and educators safe, and bolster our economy.

During his campaign, Biden introduced plans to strengthen public education by fully funding IDEA, tripling Title I resources, and increasing the number of school counselors. He also will invest in higher education by making community college affordable and accessible, and addressing student debt. Biden has listened to educators’ calls for a qualified secretary of education, and has pledged to replace Betsy DeVos with someone who has experience in a public school classroom and a proven record of advocating for students and educators. He has powerful ideas to encourage union organizing and protect the collective bargaining rights that educators rely on to advocate for their students and their profession.

“I can say unequivocally looking at Joe Biden’s stances, his policies, they’re all the things that we’ve been waiting to hear, if not for four years, for decades,” says Arizona Education Association Vice President Marisol Garcia, who also served as a national organizer of Educators for Biden.

As an educator and Chicana activist, Garcia doubled down on activism over the last four years, fighting for equitable access to high quality public education for all students. The results in Arizona demonstrate the power of educator activism in making political change. And educators like Garcia aren’t about to stop now.

As leaders in their communities, it is more important than ever that educators continue advocating for students and public schools. Now, educators will have partners in the White House working to unify the country, tackle the pandemic, strengthen our public schools, dismantle institutional racism, and build a better economy that works for all Americans.