Think clean water isn't an educational issue? Think again. Schools in Jackson, Mississippi, are physically closed (again!) due to the city's water issues, while the Mississippi Association of Educators leads a coalition to find solutions. 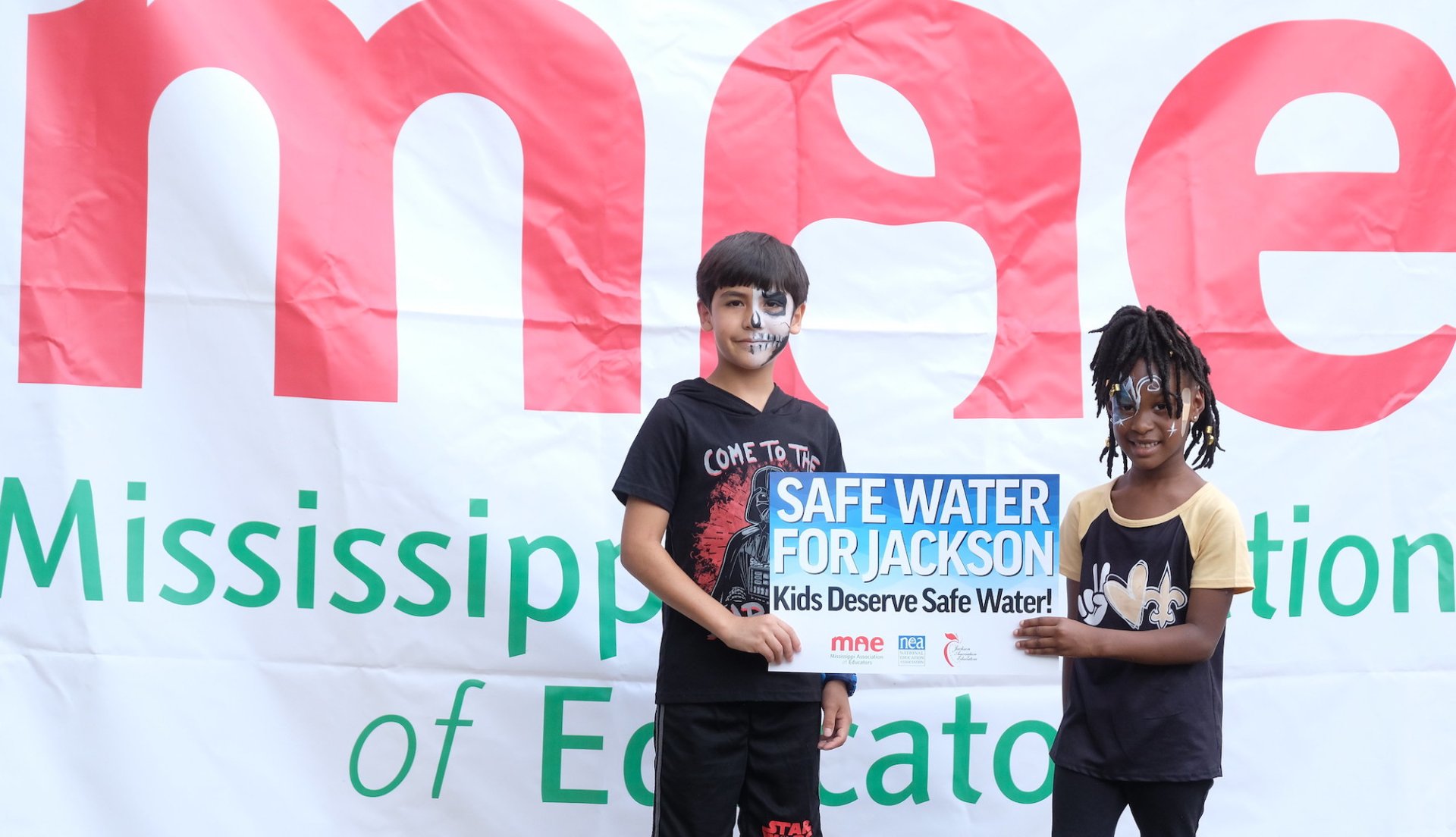 [Editor's note: Thanks to persistent advocacy by Mississippi educators, progress is being made in Jackson! In late September, the U.S. Senate and House of Representatives allocated $20 million to Jackson's water infrastructure system. Then, in October, Congress launched an inquiry into what representatives called a history of disinvestment by the state of Mississippi into Jackson's water system, and began seeking information on how federal funds are being spent. In November, the city of Jackson and the state's health department agreed to a federal takeover of the water system. Through this agreement, the U.S. Department of Justice will establish a third-party to monitor and ensure water safety.]

Jackson, Mississippi, is a capital city in the United States—and today, more than 150,000 of its residents can’t drink the water that comes out of their taps.

Due to the most recent collapse of the city’s water system, not one Jackson student—from pre-K to college—is sitting in a physical classroom. Instead, they're attempting to log into virtual lessons that educators prepared with scant notice. On Monday, the state’s governor issued an emergency order whereby the state will be taking over the water plant and the National Guard distributing safe water to Jackson residents.

For weeks, Mississippi Association of Educators leaders have been sounding the alarm about Jackson’s increasing lack of safe water, and leading a community effort to find solutions for children and families. “I taught in Jackson Public Schools for 14 years, and in each of those years, there was an issue with water. Maybe it was one day, two days. Now it’s weeks,” said MAE President Erica Jones.

How You Can Help

An NEA & MAE Safe Water Campaign Crisis Relief Fund has been set up to aid fellow educators and the students of public schools. Learn more about how you can contribute.
Donate now

This past Saturday marked Day 32 of the latest boil-water alert in the city, and also the day that local educators, parents, elected officials, faith leaders, and businesspeople stood up together at the MAE-hosted Rally for Safe Drinking Water. “We’re going to work together” to fix the problem, Jones promised.

Clean water is a human right, says Jones—and a “water crisis is an education crisis.” Not only does Jackson’s failing water system regularly limit students’ access to clean tap water, a majority of the city’s water pipes also contain dangerous levels of lead and copper, which are proven to cause lifelong learning and behavioral issues.

“Our students deserve better. Our community deserves better,” says Jones. And that’s why MAE is leading the way to make sure its students and schools, as well as Jackson’s homes and families, have clean water.

“The other day, someone asked me, ‘Why is MAE, why is JAE, talking about water? What does safe water have to do with education?’ It has everything to do with education,” said George Stewart, a middle-school teacher in Jackson and president of the Jackson Association of Educators, during Saturday’s rally.

Picture this: A Jackson second-grade teacher, like Jones was for 14 years, needs to take her students to the toilet. But the toilet in her part of the school building doesn’t work. "When your toilets don't flush and you have to take your class to another part of the building to get to a working toilet or drinking fountain, or you have to go outside to a port-a-potty, what would normally be a 10-minute break from instruction becomes a 30-minute, or 45-minute break from instruction,” Jones points out.

“If this isn’t an educational issue, I don’t know what is!” said Stewart.

Last year, Stewart and his Whitten Middle School students stayed home for two weeks because of a lack of water, a situation that forced teachers and students “to shift very quickly to remote learning, which we know doesn’t serve every student well,” he added.

Meanwhile, the city’s boil-water alerts have become so common that Jackson residents have had to boil their water for more days this summer than they didn’t, and the number of alerts grows each year. During those times, school cafeteria workers struggle to prepare safe, healthy meals, Jones said. Custodians must work twice as hard to keep schools clean, especially bathrooms.

Educators and students must rely on bottled water, which can be expensive. This past weekend, MAE members and volunteers distributed 22,176 bottles of water to local families and residents.

During this past weekend’s MAE-led rally, guest speakers included Jackson parents, a restaurant owner who has to boil every drop of water used in his kitchen, and a local Millsaps College student, Jakob Heldt, who recalled what it was like to study in Jackson last winter, in the aftermath of ice storms.

“In the weeks leading up to winter, I didn’t realize why everybody was so scared. I didn’t know what people meant when they said the city would be shut down,” he recalled. As a new student, Heldt hadn’t lived in Jackson during the winter storms of 2010, 2014, and 2018, which crashed the water system.

He soon realized. When temps dropped, the system collapsed: water wasn’t going into the city’s treatment facilities, and it wasn’t leaving, either. Tens of thousands of residents—especially those in Jackson’s predominantly Black neighborhoods—were left without running water for up to a month.

“For three weeks, we had no water. We had to shovel snow into buckets so that we could flush our toilets with melted snow,” said Heldt. “When the snow was gone, we couldn’t flush the toilets at all.”

In the wake of the 2021 storms, state lawmakers pledged a scant $3 million to the city’s water issues, a fraction of the amount necessary. Meanwhile, this year the Biden administration sent $1.8 billion in American Rescue Plans (ARP) funds to Mississippi. Of that, state officials have allocated a possible $25 million to Jackson’s water system, provided the city applies for it with a comprehensive plan and $25 million in matching funds. The application period opens in September.

We contributed 2,000 bottles of water to the folks at Lanier High school yesterday. We are working to help solve Jackson’s water crisis. It is an education crisis. #MAEToday #waterisahumanright pic.twitter.com/HPElIglT6w

The money is there, say MAE leaders. The need is there, too.

In a recent MAE-led survey of Jackson residents, 93 percent said they experienced issues with their tap water; a stunning 96 percent said they felt their water was unsafe. And yet, every single student—every single person—deserves safe water, says MAE Executive Director Antonio Castañon Luna.

With that in mind, a MAE-led coalition of community, faith, and health organizations are calling on Jackson’s mayor to share a fully developed, comprehensive plan to fix Jackson’s water system—including costs and a timeline—by September 1.

MAE leaders and their partners also have been meeting with Mississippi’s lawmakers, pressing them to allocate more money to Jackson’s water system during the 2023 legislative session.

“We are going to stand together for our city, for our children, for our schools—because we believe every kid deserves safe water,” Castañon Luna told rally-goers Saturday.