Hundreds of U.S. faculty, including NEA members, have been reported to Professor Watchlist, a right-wing web site that identifies 'radical' professors. 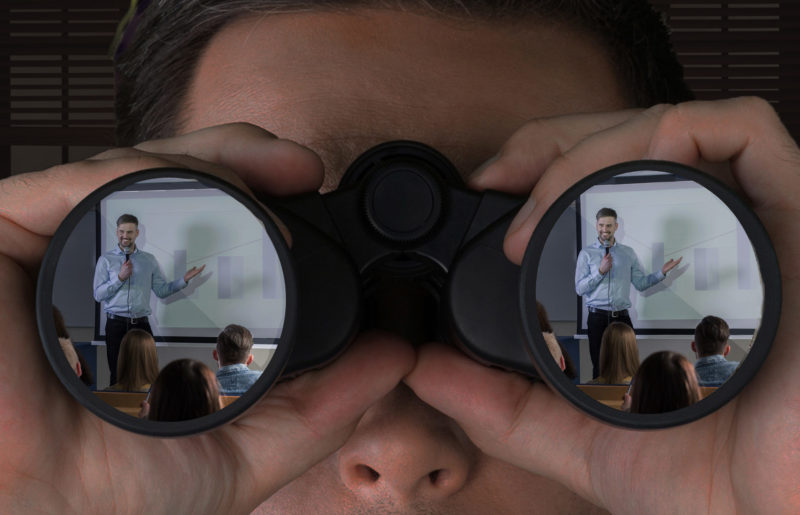 What does it mean to ask college students to think critically? To question assumptions or debate ideas? Apparently, it means you should be on a public “watch list” of dangerous faculty.

Recently, hundreds of U.S. faculty, including NEA Higher Ed members, have found themselves reported to Professor Watchlist, a website launched shortly after the election by the right-wing, well-funded political organization Turning Point USA.

Turning Point says it aims to identify professors who “advance a radical agenda in lecture halls,” but faculty believe the more likely target is academic freedom, or the idea that faculty’s unfettered ability to teach or do research in search of the truth serves the common good.

By calling out faculty, partisans may hope to silence them, or promote one single political ideology in classrooms, but NEA’s National Council for Higher Education President DeWayne Sheaffer has a different idea: “Let’s render the list null and void,” he says.

His strategy? Report yourself, NEA educators.

By reporting yourself to Professor Watchlist for common classroom actions that might include encouraging students to exchange ideas, question evidence, or reflect on their thinking, Sheaffer points out that faculty will unveil the “madness” that underlies the list.

Take Action
Stand up for academic freedom. Join your colleagues on the list, and counter its malicious effects on teaching and learning.

Sheaffer is not the only educator to conclude that this is the appropriate action. Last week, more than 100 faculty members from the private University of Notre Dame signed an open letter, asking to be added to the list, which already includes two of their colleagues, including Notre Dame’s director of multicultural student programs.

This is “the sort of company we wish to keep,” Notre Dame faculty wrote.

“I cannot thank the faculty of Notre Dame enough for reminding all of us how important it is to remain true to our profession,” responds Darwin Pagnac, a NEA Higher Ed member from Des Moines Area Community College, who was reported to the list after asking students to research climate-change deniers. “Their sentiments are my sentiments exactly, and I welcome their inclusion and their company on 'the list'.”

These kinds of political watch lists, or blacklists, aren't entirely new. A little more than a decade ago, conservative author David Horowitz published a book about the "101 most dangerous academics in America," which was called "an apologia for the tactics of Senator Joe McCarthy," the U.S. Senator who used public attacks on patriotism and other witch-hunt style tactics to damage his political opponents.

By reporting yourself to Professor Watchlist for common classroom actions that might include encouraging students to exchange ideas, question evidence, or reflect on their thinking, Sheaffer points out that faculty will unveil the “madness” that underlies the list.

But faculty worry that politically motivated attacks on academic freedom are growing. In Wisconsin last year, a proposed budget from Gov. Scott Walker would have amended the state university's mission statement, called the "Wisconsin Idea," so that the key goal—"basic to every purpose of the system is the search for truth"—would be deleted and replaced with "meet the state's workforce needs."

Walker called it an editing error, but more recently Wisconsin removed faculty tenure from state law and weakened job protections for faculty, who are fighting back. Tenure is the backbone of academic freedom—without the first, faculty are less likely to test the second by engaging in valuable, but potentially provocative, research on, for example, the efficacy of gun-control laws, or whether expensive prescription drugs are worth the cost.

California State University Channel Islands professor Frank Barajas, a NEA Higher Ed member, found out he had been named to the list when his phone started ringing. While many of his colleagues were calling to say, "good job! you must have done something right!" he says, Barajas remains concerned. "What is this watch list really about, and what is its potential?"

Barajas was reported for encouraging his U.S. History students—but not mandating them—to write to California state legislators about the impact of rising student tuition on their lives. “Exercising the freedom to express and contact your representatives, this makes me a danger to society?” he asks. Barajas also points out that he did not tell students what they should write. “If they wanted higher tuition, so be it.”

As a tenured, full professor in his 24th year of teaching, Barajas is not concerned for himself. But for his colleagues, especially the adjunct or contingent professors who work with very little job security, and now account for more than three-quarters of all U.S. faculty, he worries that the threat of public censure may alter their approach to students. Keeping their jobs may mean not asking hard questions, or challenging their students' assumptions. “They may be more gun shy in terms of exercises and assignments they want to adopt,” he suggests.

“We need to take this seriously,” he says.