Why are student stress levels so elevated? Schools, parents, communities, and students all play a role, and solutions depend on everyone working together.

The change Chris Boitz saw in his students was gradual but unmistakable.

“Over the course of a few years, everything was different—their expressions, their demeanor, their moods,” he recalls. “There was a loss of focus. Many of them looked pretty desperate, actually.”

Boitz is a music teacher at Saratoga High, a high-achieving school in California where students are under great pressure to perform well. But schools that don’t share Saratoga’s high-performing percentile are not immune to high-stress academic environments.

A 2014 study by the American Psychological Association found that U.S. teens are even more stressed out than adults. Thirty percent of teens reported feeling sad or depressed because of stress, and 31% felt overwhelmed. Another 36% said that stress made them tired and 23% said it made them skip meals.

Awareness of student stress, says Denise Pope of Stanford University, has moved to the forefront. Pope is co-founder of the Challenge Success project, which provides school districts with strategies to promote student wellness, and co-author of
"Overloaded and Underprepared: Strategies for Stronger Schools and Healthy, Successful Kids."

“People are finally seeing what negative stress does to the body, what that does to the psyche, and what it does to school engagement,” explains Pope. “Schools and communities know stress is a problem and they want solutions.”

School as a Pressure Cooker 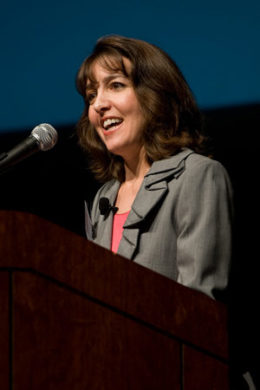 There’s nothing necessarily wrong with a little stress. That is, the kind of nervous energy or “butterflies” that can sharpen focus and increase performance during, say, a big test or a class presentation. But many students, educators and parents will tell you it's different now: The strain has grown to crisis levels in many schools.

“The entire education system has created a pressure cooker for students and staff,” Pope explains. “Twenty years ago, when you asked teenagers about what stressed them out, you would typically first hear things like ‘my parents’ divorce,’ or ‘my Dad’s an alcoholic,’ or ‘I don’t fit in socially.’ Nowadays, it’s always about school.”

As long as it is not assigned merely as a routine practice, many experts insist homework provides tangible academic benefits. But too much of it can heighten student stress, lead to sleep deprivation and generally less time for family, friends, and activities.

A growing number of researchers also believe that the average school start time of 8:03 a.m. is too early. In 2014, the American Academy of Pediatrics recommended middle and high schools delay the start of class to 8:30 a.m. or later, so as to align school schedules to the biological sleep rhythms of adolescents. This change, Pope says, "can make a huge difference."

Researchers at the University of Minnesota recently examined data from more than 9,000 students attending 8 high schools in 3 states. They found that attendance and academic performance in math, English, science, and social studies improved at schools with later start times, while tardiness, substance abuse, and symptoms of depression declined. At one participating school that changed the start time from 7:20 a.m. to 8:30 a.m., school counselors and nurses reported fewer students seeking help for emotional problems and physical complaints.

Then there’s high-stakes testing. “ That’s a stress that everyone in a school feels,” says Pope. “And a good example how student and teacher stress feed of each other.”

But that’s not the full story. Stress—what causes it, where it comes from, and what can alleviate it—is a complex issue.

Students as Numbers and Statistics

School policies and procedures play an unquestionable role in elevating student stress, but students and their families can get too caught up in a culture of competitiveness. "I've spoken with many kids who tell me, 'I’m studying as hard as I can and my parents are saying I just need to study harder.' These kids stay up all night and focus 100 percent on schoolwork to get ahead," Pope says.

Lori Stratton, an English teacher at Wamego High School in Wamego, Kan., believes the growing academic opportunities available to students can be too tempting to students and parents.

"Every grade we get, every test we take, becomes a permanent number on a transcript that gets dissected by a college. Throughout high school, our names are constantly represented by numbers and statistics.” - Jake Gluckman, 18

“On one hand, options are a good thing,” Stratton says, “but students in my school are taking too many AP classes and dual-credit classes. In some cases, they’re taking a full-time college schedule while trying to maintain their high school activities.”

“Student stress can be self-imposed,” says Lynne Belvedere, a recently-retired student assistance coordinator at Millburn High School in New Jersey. “Over the years I’ve seen a change in the overall culture - inside and outside of school - that has pushed students to take on too much, and they don’t have the necessary coping skills.”

Lack of sleep is the common complaint among senior Noah Brookhim’s Millburn classmates. Due to an overload of AP homework, many of them get only four or five hours of nighttime rest.

“Many students may feel compelled to take multiple AP or accelerated courses in order to make their transcripts more appealing to colleges,” Brookhim explains. “As a result, they’re not able to maintain a healthy balance between schoolwork and their lives outside of school.”

What it comes down to, according to Jake Gluckman, a 2016 Millburn graduate, is that stress is rooted in “the idea of college being the finish line of life.”

"Every grade we get, every test we take, becomes a permanent number on a transcript that gets dissected by a college,"  Gluckman says. "Throughout high school, our names are constantly represented by numbers and statistics.” 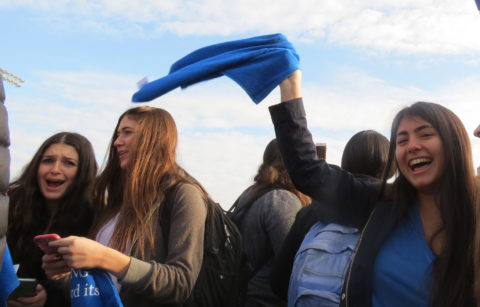 Last December, Millburn High’s senior class assembled outside the school on a Monday morning and let out a long, communal primal scream. A student-led protest of an unpopular school policy? No, this was a school-sanctioned stress reliever to take the edge off, at least temporarily, the tension surrounding the college application process. As PARCC testing and AP exams approached in May, the school also brought in two “therapy dogs” to sit in the guidance office and receive visits from students looking for a little down time.

On another day, Millburn seniors were dismissed from class 30 minutes early to gather on the lawn of the school. A huge canvas was laid out before them. Out came the paints, and the fun began.

“It was a great way for us to relieve stress in a colorful and creative manner,” recalls Brookhim. “We loved the opportunity to socialize with each other and create a collective piece of art that represents the ability to overcome any stress [we] may experience both in and out of school.”

These are popular and fairly easy to implement activities, but Millburn High is also mapping out a more comprehensive strategy to reduce student stress while still supporting their academic success.

We are determined to raise awareness in the community about student stress and take measured, carefully planned steps with one goal in mind: sustainable change.” - Jessica Siegel, Millburn High School

Like many other school districts, Millburn surveyed its student body and found that students spent too much time on extracurricular activities, didn’t get enough sleep, and, by a 7 to 1 ratio, were more concerned about getting good grades than actually learning the material.

Jessica Siegel is chair of Millburn’s English department. With her colleague Stephanie Greenberg, she compiled results from the student survey into a report that helped the school community stand up and take action. Siegel says the issues identified were serious and deserved the school’s attention and resources. “We are determined to raise awareness in the community about student stress and take measured, carefully planned steps with one goal in mind: sustainable change,” says Siegel.

For every initiative designed to help students manage their own stress level—Millburn is also looking at mindfulness and meditation workshops—school leaders are looking at potential changes that can reduce pressure and anxiety while preserving academic opportunities for students.

Was Millburn going to eliminate or drastically reduce homework? No, but Siegel successfully lobbied her colleagues to ban assigning homework over holiday breaks. “We have to respect that family time,” she says.

Perhaps the most ambitious proposal on Millburn’s radar is converting to a block schedule. Like most schools, Millburn operates on a traditional schedule, which is anywhere from 40-50 minutes per period, seven times a day. Under a block schedule, schools hold fewer classes that meet for longer periods each day. This schedule changes the pace for students and teachers for the better, says Denise Pope.

“The traditional schedule means that teachers tend to resort to lecturing instead of deeper discussions, Socratic seminars, things that we know will make the learning stick better. is is also important from a well-being standpoint. If you shadow kids for a school day, you’d see that they’re exhausted. A saner schedule is better academically and for mental health and well-being,” explains Pope.

Millburn hasn’t taken that step yet. School leaders are vetting various proposals and visiting schools that have made the change. Regardless of the specific type of block schedule, it’s a heavy lift for any school. Winning over the community—parents in particular—can be tricky terrain to navigate. “I’ve seen town meetings go bad around a schedule change because of angry parents who may not understand what’s really behind it,” adds Pope.

Just ask Chris Boitz at Saratoga High. In 2015, Boitz served on a school-wide committee composed of educators, students, parents and administrators that looked into and ultimately recommended a new block schedule. The proposal came under withering attack from a small but very vocal group of parents. Soon, the proposal was scuttled. “I guess not everyone believed in the cause,” Boitz says.

The episode underscores the often delicate balancing act between combatting student stress and pacifying parents’ concerns about diluted academic rigor. But every community is different, and what works in one can't necessarily be replicated in another.

Pointing fingers is easy, says Jessica Siegel, but is counterproductive in building the collaboration necessary to tackle the issue.

“Stress is a multi-faceted problem, and everyone—students, educators, parents and the community—[must] acknowledge their role and work together to reduce it,” Siegel explains. “You can’t do it alone.”