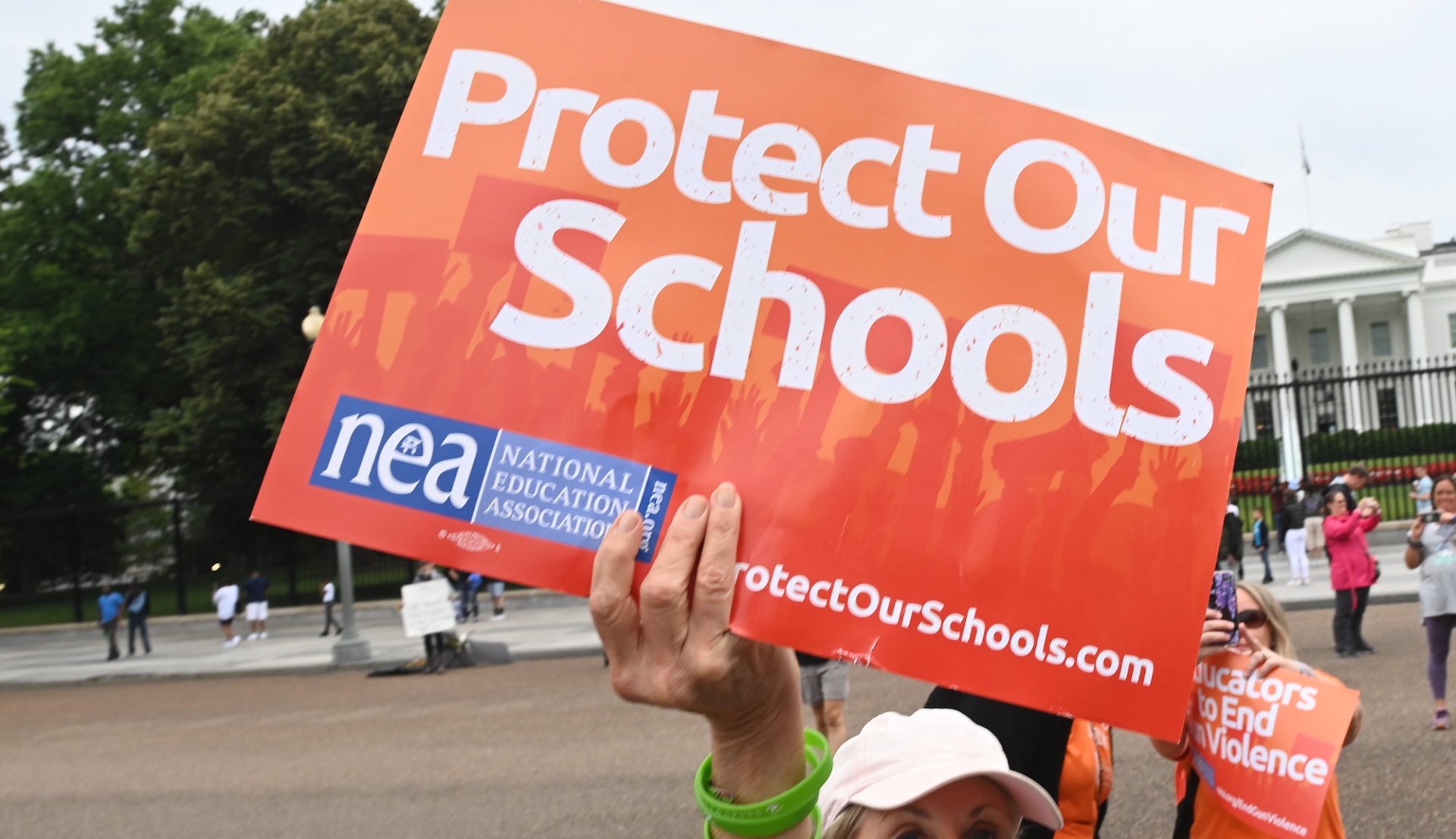 Twenty-three years ago, when the violence at Columbine High School began, Zach Martin was a sophomore, sitting in a Columbine math class. In another wing of the building, freshman Cris Welch was in art.

Today, Martin and Welch are teachers at the rebuilt Columbine High. They joined NEA President Becky Pringle at Saturday’s March for Our Lives, alongside two NEA members who survived November’s school shooting in Oxford, Michigan, in demanding more be done to keep students and educators safe from gun violence.

Text “NOW” to 48744, or visit nea.org/gunviolence, to get involved with NEA’s movement for safe schools.

“We Need To Do Something.”

Columbine was nearly a quarter-century ago. The Sandy Hook massacre, which cost the lives of 20 children and six educators, was more than a decade ago. Parkland? Five years ago. Oxford? Six months. And Uvalde? Just 18 days.

“A few weeks ago, when the shooting in Texas happened, I felt nothing but angry. And then I understood that we need to do something about it,” said Lauren Rambo, a biology teacher at Oxford High School, where four students were killed in November, including one who had left Rambo’s class to use the bathroom.

“After Uvalde, I’m more angry that this keeps happening,” said Melissa Gibbons, an Oxford High teacher and parent, who secured her students behind a double-locked door—and then agonized whether her own children were safe, too.

So many students and educators know the terror of locked doors, of darkened classrooms, of frantic checks of cell phones. Nearly four years ago in California, Saugus High School choir teacher Kaitlin Holt was listening to an audio recording with her students when a group of terrified students burst in. Minutes later, in a small office adjacent to her classroom, Holt was holding a maxipad to a student’s bleeding gunshot wound, while keeping nearly 40 students calm and quiet.

“It was terrifying,” she says.

A Call to Action 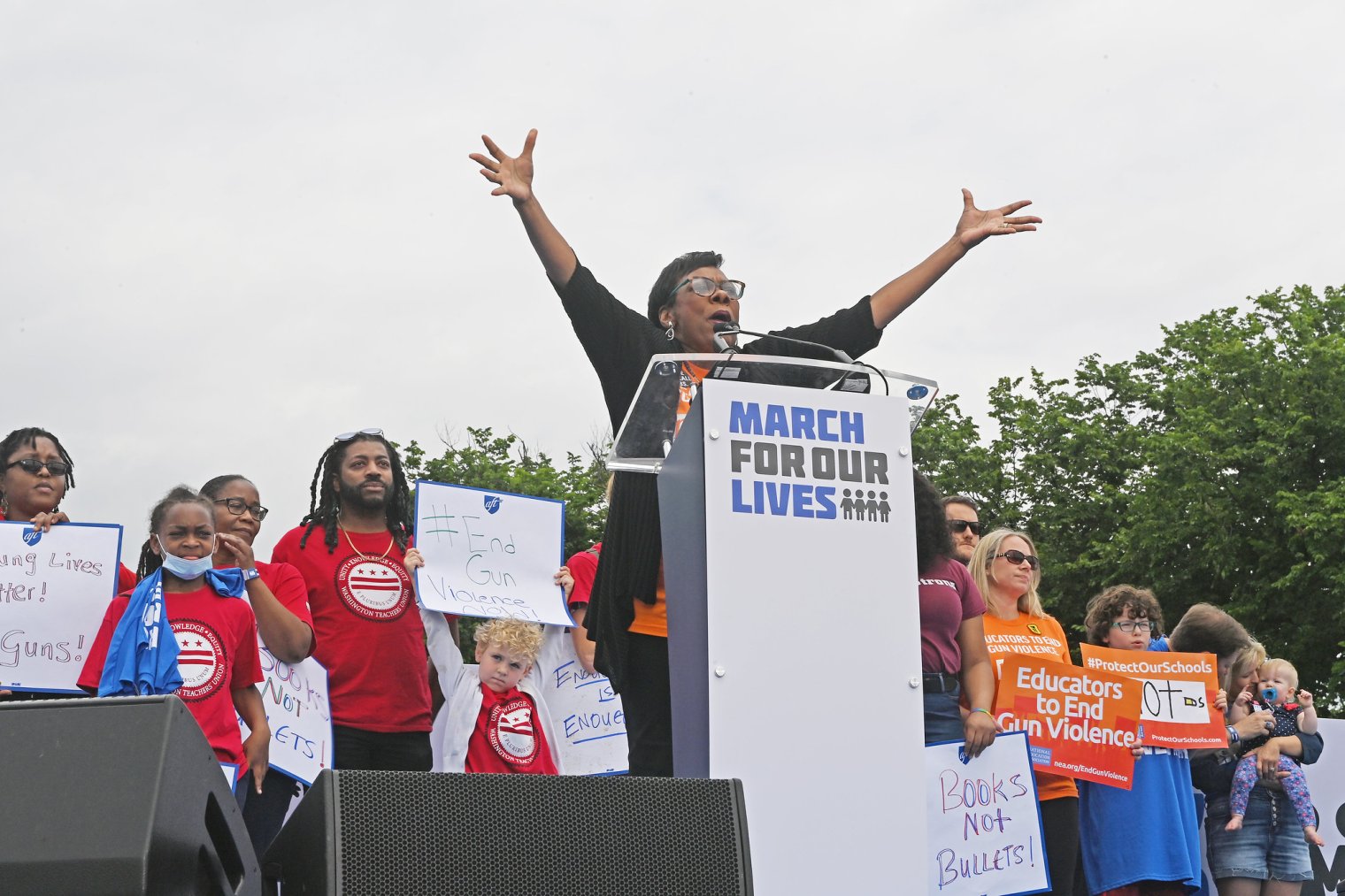 1 OF 4
NEA President Becky Pringle addresses an estimated 40,000 students, educators, and activists at the March for Our Lives. 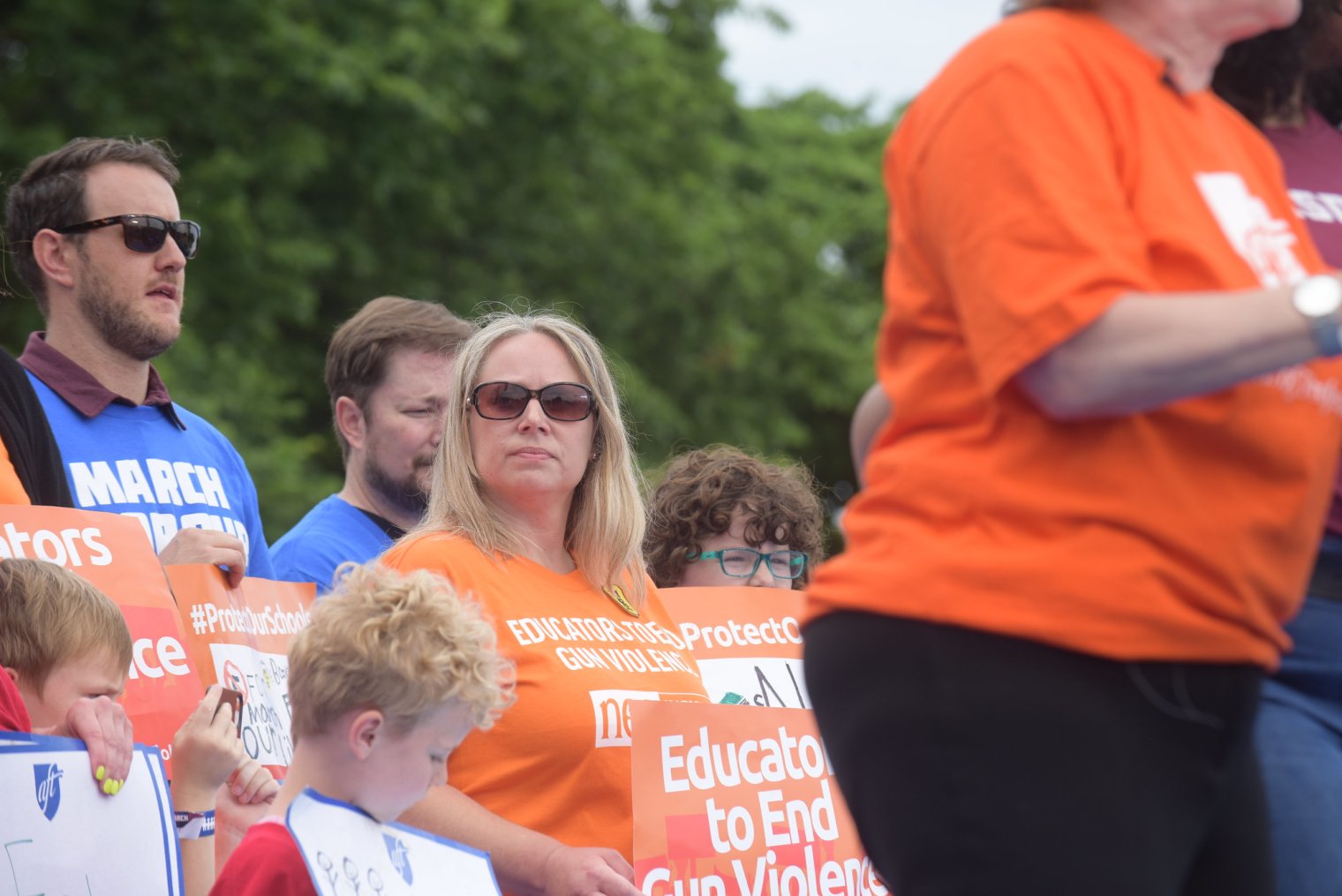 2 OF 4
Melissa Gibbons, an Oxford High, MI teacher and parent secured her students behind a double-locked door during a school shooting in November 2021 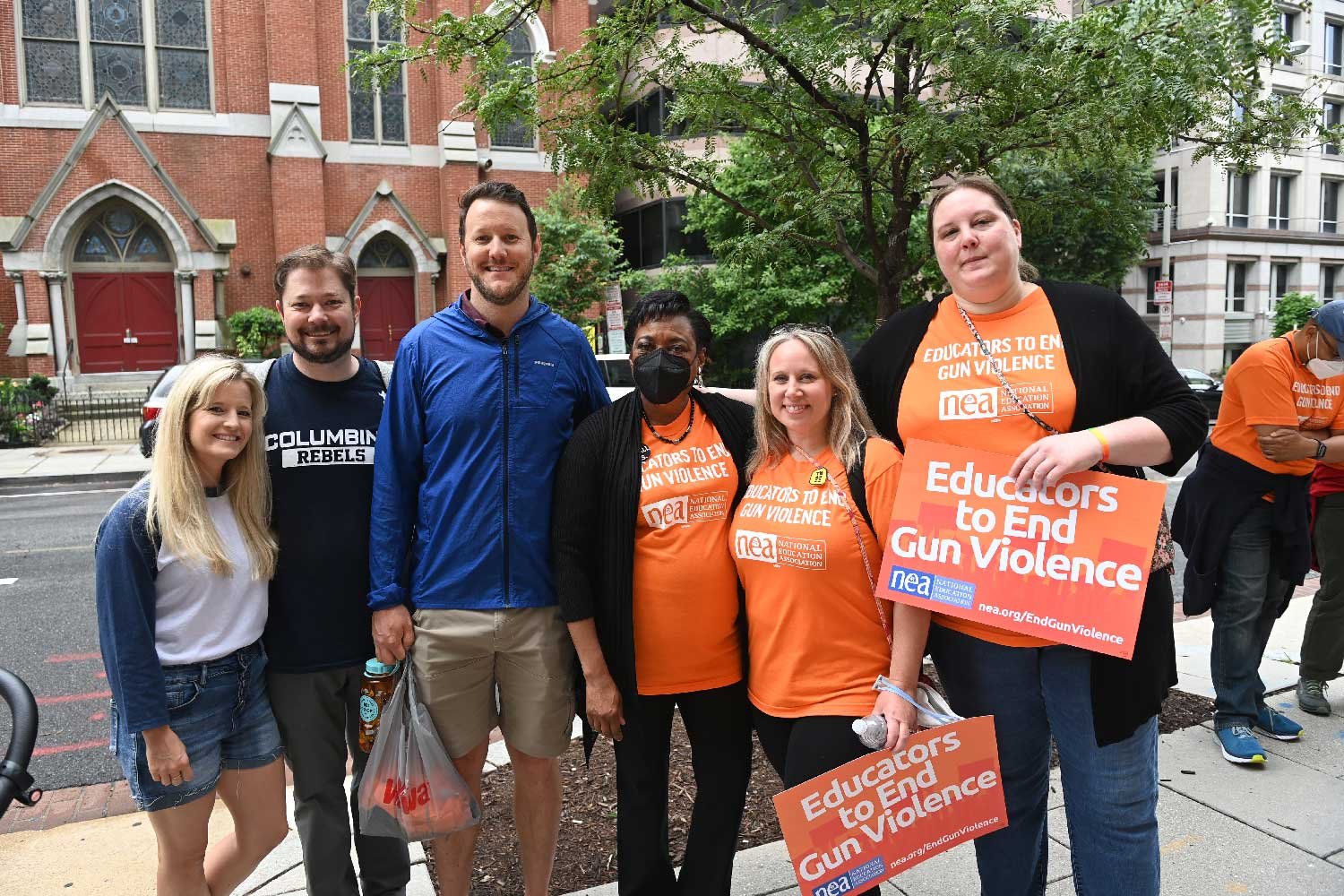 3 OF 4
Educators from Columbine and Oxford high schools traveled to Washington, DC for the March For Our Lives. 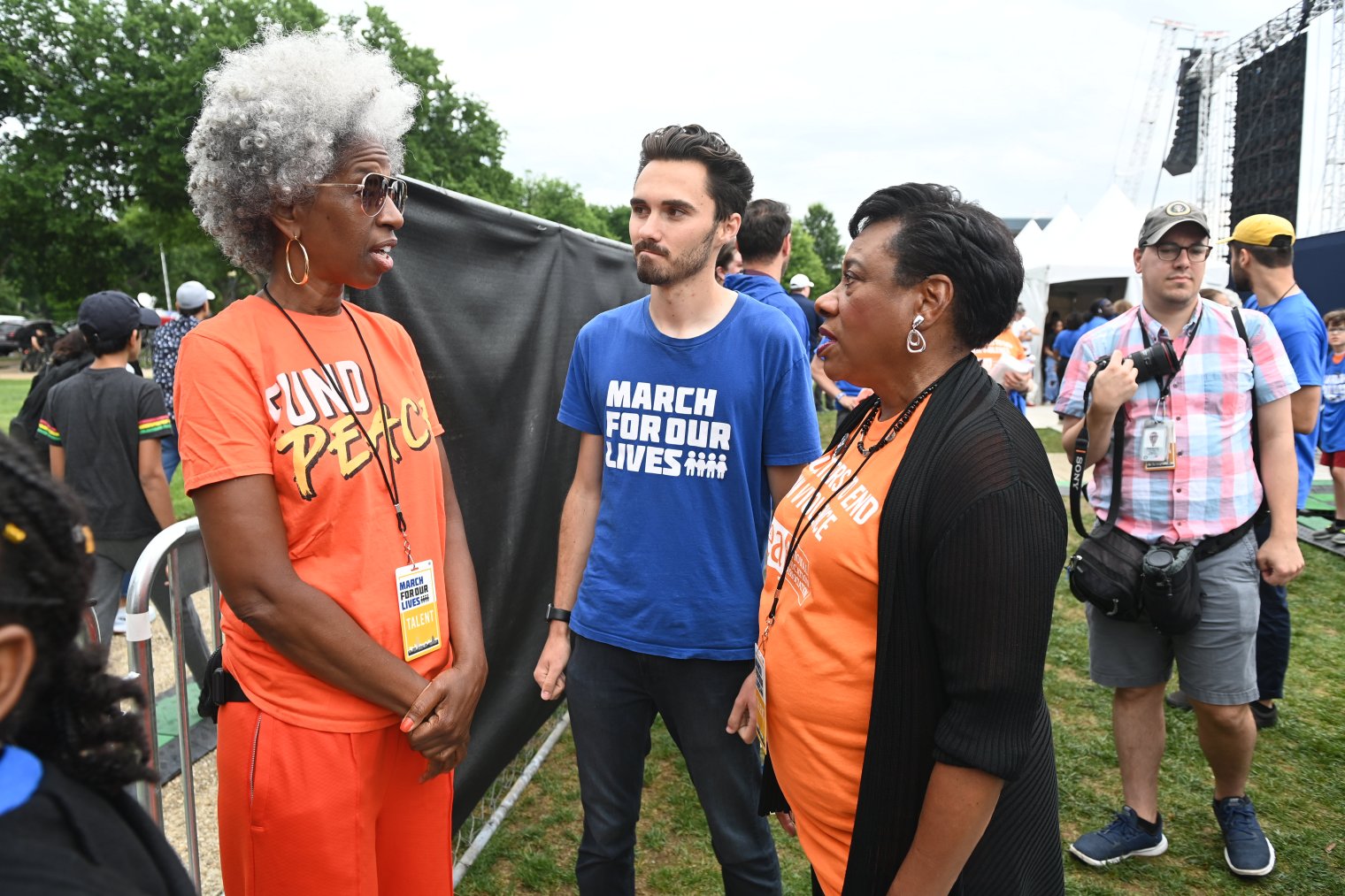 4 OF 4
Becky Pringle back stage with Life Camp founder Erica Ford and March for Our Lives co-founder David Hogg .

Today, as lawmakers debate legislation on guns, “it’s very frustrating to hear people say, ‘it’s not about the guns,’” says Holt. “This person, the shooter, shot six people on my campus in 16 seconds. Sixteen seconds! … It’s discouraging to keep hearing these arguments from people who haven’t experienced this. They have no clue. The only thing that will help is less guns.”

Earlier this week, on Wednesday, alongside the mother of 10-year-old Lexi Rubio, a fourth grader murdered in Uvalde, Pringle addressed a House of Representatives committee, urging them to act now to adopt common-sense legislation.

I am on my way to rally with @AMarch4OurLives alongside so many dedicated educators, students, and activists. Together, we will demand change and #EndGunViolence. pic.twitter.com/ve3ZjxpIA5

The majority of Americans support background checks on gun buyers, a ban on semi-automatic weapons, and raising the purchasing age to 21. Mental-health supports also would be helpful—educators have been calling for more school counselors and psychologists for many years, and have received scant funding from most state legislatures—but mental health is not the only answer.

And arming educators is not the answer at all. “We cannot ask educators, who enter this profession to help children soar, to carry weapons and wear body armor while teaching addition or the Pythagorean Theorem,” Pringle told lawmakers. “Because by the time someone has shown up at the school or the store or the hospital or the house of worship with a military weapon, it is already too late.”

Showing up and standing up

Every day, in our stores, our streets, our churches, our movie theaters, 111 people are killed by guns. Gun violence affects everyone, but more often if affects Black and Latino communities, where more than two thirds of adults or someone they care for has experienced gun violence.

Today, more children die in the U.S. from gunshots than any other cause.

“As a parent, I feel like I have to do anything I can, everything in my power to make my daughter’s future as safe as possible,” said Welch, who flew from Colorado with his wife Larissa, also a Columbine teacher, and their baby daughter, who turned 1 three days ago. “When deciding to come out to Washington, she was the prime motivating factor. I want her to have a safer environment than I ended up having—and a safer environment than students have today.”

The fight is not over—not even close. Change is possible, said Martin. “After 23 years, there has been some change and some progress, clearly not enough, and I understand how it can be hard for people to maintain hope. For me, March for Our Lives fills me with hope,” he said.

Gibbons had students who told her they might not go to a local march in Oxford this weekend, she said. They didn’t think it would make a difference. But, as lawmakers in D.C., and around the country consider legislative and policy solutions to gun violence, Gibbons believes they need to hear from educators and students.

“I want to show my students that it matters for us to stand up and show up,” she said.