Hundreds of immigrants rallied outside the Supreme Court to support the program that provided safety from deportation to 700,000 immigrants, including an estimated 20,000 educators or aspiring educators. 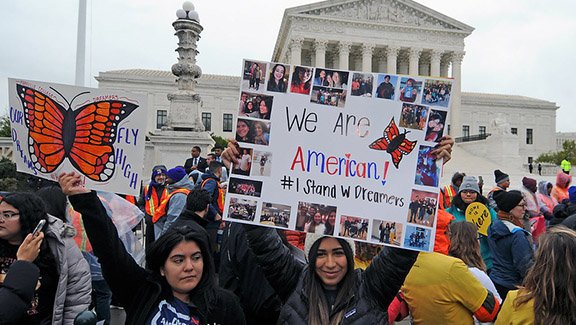 While hundreds of immigrants rallied outside the Supreme Court on Tuesday, Texas teacher Karen Reyes sat inside, listening to a Trump administration attorney argue its legal right to terminate a federal program that enables law-abiding immigrants brought to the U.S. as children, like Reyes, to stay in the only place they call home.

“They were in there talking about policy. They were not talking about us, about our humanity,” says Reyes, who teaches deaf and hard-of-hearing pre-kindergartners in Austin, Tex. “The best part was coming outside onto the steps of the court, into this crowd of people who welcomed us home. When we came out, we saw our whole community…We’re unafraid. We’re unapologetic. And we’re unstoppable.”

The program in question is the Deferred Action for Childhood Arrivals (DACA) program that President Obama authorized through executive action in 2012. Since then, it has provided safety from deportation to 700,000 immigrants, including an estimated 20,000 educators or aspiring educators. With DACA’s protection, they have stepped out of the shadows, getting work permits and Social Security numbers, going to college and living their dreams.

They include Vicente Rodriguez, an aspiring educator from California, who spoke at the rally on Tuesday, and Karina Alvarez, a first-grade teacher from San Antonio, Texas, who also spoke. “We love this country. It’s the only country we’ve known,” says Rodriguez. “We’re asking the court to see us as the Americans we are.”

Lower courts already have ruled that President Trump’s decision in 2017 to terminate DACA was based on faulty legal reasoning, forcing the administration to continue administering DACA renewals while it appealed those judgments. On Tuesday, the Supreme Court heard oral arguments in the appeal. Its decision is expected in 2020.

In legal briefs, NEA has urged the court to do the right thing in protecting the thousands of educators and others who are sheltered by DACA. “DHS [the Department of Homeland Security] swept away DACA, together with its recipients’ dreams and their communities’ needs, in one curt memorandum that failed to provide a reasoned explanation for the agency’s drastic change of course,” wrote NEA attorneys.

“DACA educators, students, and administrators can—and do, here in this brief—attest to the serious reliance interests engendered by DACA, as well as the disastrous results that will ensue if the program is terminated.”

These are educators, students and other workers with successful careers, growing families, and deep roots in their American communities. Reyes, 31, has lived in the United States for almost 30 years. Possible deportation wouldn’t just upend her career in the classroom, it also would affect the well-being of her students. She knows this—and has timed her DACA renewal to coincide with the winter holidays so that, if she can’t get the paperwork approved by the Trump administration, her school can hopefully hire a replacement teacher and minimize upheaval in her disabled students’ lives.

Meanwhile, Rodriguez wonders if he’ll ever become a teacher. He currently works as a guest teacher in a California classroom, providing one-on-one assistance to a student with a disability while pursuing a master’s degree in education. Without DACA, he worked cash-only jobs, taking nine years to earn an associate’s degree by paying for just one or two classes at a time. With DACA—and a driver’s license and Social Security number and better-paying work—he was able to earn a bachelor’s degree from the University of California Riverside.

Now, he’s about a year away from leading his own elementary-school classroom. “My career is within arm’s reach. I can see it,” he told the crowd Tuesday. When he gets it, he says, “I will make it my life’s mission to make sure my students never experience exclusion.”

Whatever the justices decide, says Reyes, she’s not going anywhere. “We’re not going to sit down and cry it out and self-deport. We’re going to organize, we’re going to educate, and we’re going to agitate. To me, the one thing we’re going to continue doing is push Congress to take action, to pass legislation for a pathway to citizenship—not just for those of us who came when we were young, but for our parents and our community. This fight is so much bigger than DACA. This is the case before the court now, but we’re fighting for the dignity and respect for all immigrants.”

In addition to its legal advocacy, NEA also supports legislative solutions to the immigration crisis, including passage of the DREAM Act, which would open a pathway to citizenship for some Dreamers. Tell your senators and representatives to support the DREAM Act, too.