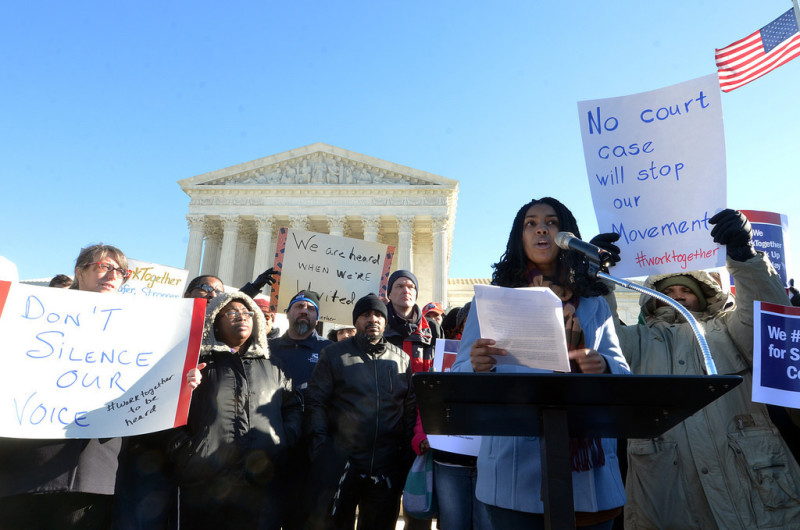 Minutes before Supreme Court justices were set to hear oral arguments Monday involving the much-anticipated Friedrichs v. California Teachers Association (CTA), teacher Reagan Duncan stepped up to a makeshift podium at the bottom of the revered marble steps of the court building. She wanted to be heard.

“I’ve seen firsthand that my voice is heard through the collective bargaining process,” said Duncan, a member of the California Teachers Association and first grade teacher at Maryland Elementary School in Vista, California. “Results, such as smaller class size, ensure our students have the quality public schools they deserve.”

Approximately 500 attendees representing a coalition of labor unions from across the nation braved freezing temperatures to demonstrate their support for working Americans as oral arguments were presented to the justices.

“The Friedrichs case being argued right in there,” said Duncan, pointing to the high court’s entrance at the top of the stairs, “threatens to do way with my ability to stand up for our students and come up with ways to improve their learning conditions.”

A brief media conference was also held on the court’s plaza following the conclusion of the arguments. Featured were attorneys arguing on behalf of CTA and working Americans, as well as for Rebecca Friedrichs, the lead plaintiff who along with nine other California teachers is asking the court to reconsider long-standing rules that have made it possible for people to stand together with one voice at work and in their communities.

Under the current system, public employees are free to choose whether or not to join a union. At job sites, workers vote on whether or not to form a union in the workplace. Even if a majority votes for a union, workers who don’t want to join don’t have to, they just pay a reduced “fair share fee” or “agency fee” to cover the cost of bargaining and representation that the union is legally required to provide for all workers.

Right now, 23 states allow unions to charge nonmembers such fees, which do not go toward a union’s political activities. Workers can opt out of all costs associated with political activity. 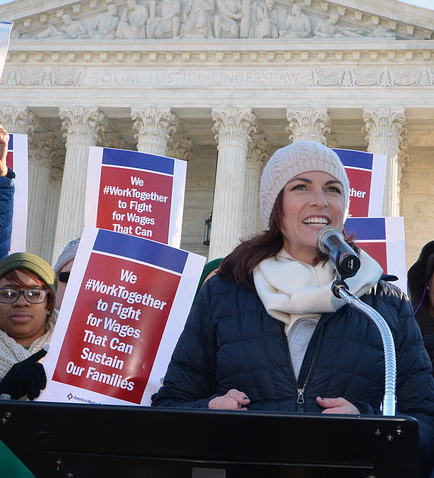 Through Friedrichs, the plaintiffs are asking the court to overturn Abood v. Detroit Board of Education, the 1977 precedent which said the fee system prevents non-members from “free-riding” since the union still has a legal duty to represent all workers.

“Today, I ask the court to please allow me to continue to be a teacher and leader by upholding a precedent that has served students, communities and educators for nearly 40 years,” said Jennifer Bado-Aleman, a program speaker and member of the Montgomery County Education Association in Maryland.

Montgomery County was one of 14 school districts that filed amicus briefs. In the brief, it says teachers unions have helped fund innovative solutions to school management problems, and that agency fees are essential to creating stability in the labor-management relationship.

“My parents are Latino immigrants, and they taught me early on the importance of education to accessing the American Dream,” Bado-Aleman said. “I’m here today because I believe that having a strong union for educators ensures a strong education system for students.”

According to several speakers, as all public employees enjoy the benefits, job security, and other protections the union negotiates, it is only fair that all employees contribute to the cost of securing those benefits and protections.

“This is the people’s court,” said Maya Walker, a CTA member and library media technician at Hayward High School in Hayward, California. “I worry that with the wrong decision in Friedrichs, I will not be able to advocate for my students.”

If the court bans fair share, it will mean that some workers will have to pay for the benefits enjoyed by all workers. Also, such a decision will make it harder for teachers, firefighters, nurses and other public service workers to negotiate for decent wages and benefits. Every public employee who benefits from a negotiated contract should contribute to the costs of securing that contract.