Educators Were a Winning Force in Election 2020

Educators took a stand for public schools under the #RedforEd banner, then they channeled that spirit into the 2020 elections. 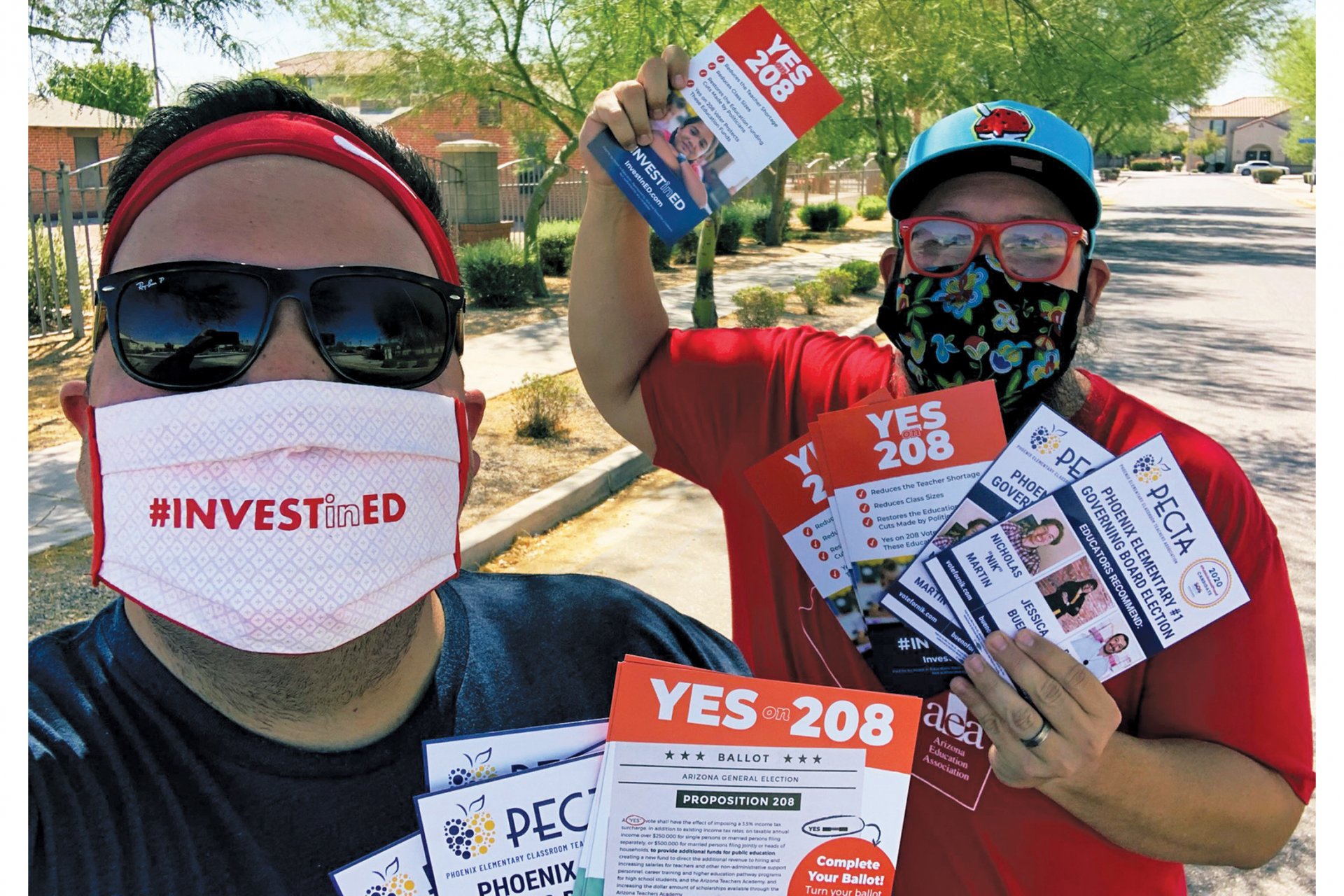 Election 2020 ushered in a new era of possibility for public schools. This was an outcome educators worked hard for, organizing for years within their communities.

Educators knew it was critical to elect a president who would partner with them to reopen schools safely and expand opportunity for all students—regardless of their race, family income, or hometown. That mission was accomplished when Joe Biden and Kamala Harris flipped five key states and earned nearly 80 million votes, the most of any presidential ticket in history.

There were scores of other races for local, state, and federal office that educators understood to be critical for public education, and so, poured their time and energy into winning.

The wins were huge. Educators helped flip U.S. Senate seats in Arizona and Colorado and protected two more in Michigan and Minnesota against strong opposition. They safeguarded the pro-public schools majority in the U.S. House. And of the 3,125 candidates that NEA state affiliates recommended in state and local races, at least 2,187 won. (For a full list of key election wins for public education, click here.)

On top of that, more than 120 NEA members ran and won!

“Over the course of the most consequential elections in our lifetime, candidates had their say, and the voters had theirs,” says NEA President Becky Pringle. “Voters ushered in pro-public education and pro-working families agendas, with unprecedented NEA activism leading the way.”

Many of these victories happened in places where educators have earned community trust by taking a stand for students.

Nowhere was the power of educator organizing more visible than in Arizona, where #RedForEd activism delivered the state for the Biden-Harris ticket; flipped a U.S. Senate seat by electing Mark Kelly, a friend of public education; and won approval of Proposition 208 to restore $1 billion in funding for K–12 schools, reduce class sizes, and address teacher shortages.

“One of the most important things we learned from the educator walkout of 2018 was how to tell our story, to have meaningful conversations about why we need to invest in education,” says Jay Barbuto, a seventh- and eighth-grade English teacher from Phoenix, who serves as co-president of the Phoenix Elementary Classroom Teachers Association.

Millions witnessed the historic six-day walkout in the spring of 2018, when more than 75,000 educators and allies flooded the streets of Phoenix in crimson shirts to demand that the governor and legislators reverse a decade of devastating education cuts. Far fewer people saw all of the organizing educators did at the local level prior to the massive protests.

“Before we walked out, we walked in,” says Marisol Garcia, vice president of the Arizona Education Association. “All the educators would gather across the street from their schools to talk to the community about what we’re fighting for.” More than 110,000 people checked in at the final round of walk-ins.

“Then we had local school boards pass resolutions of support for the Red for Ed movement,” Garcia explains. “Once we had the school boards supporting us, we had the superintendents supporting us. Growing the movement at the local level meant we truly had broad support and the trust of the community we needed in the 2020 elections.”

NEA ran a sophisticated voter-contact program in 15 battleground states, targeting both NEA members and other voters with a focus on moderates, independents, and Democrats who don’t consistently cast a ballot.

That work included Battleground Summer, NEA’s largest-ever member-to-voter effort to educate the public about education issues. In just two months, a cadre of roughly 300 trained educators in Michigan, Pennsylvania, and Wisconsin had 222,400 conversations with voters that resulted in about 30,000 vote-by-mail ballot requests—work that had significant impact, given how close the race was in some of these states.

“It was powerful to talk to voters who were still undecided and know that what you say could be pivotal in their decision,” says Amy Mizialko, president of the Milwaukee Teachers’ Education Association.

Milwaukee educators were also deeply engaged in community organizing with longtime partner Voces de la Frontera, an organization that works to expand and protect civil rights and workers’ rights. The group’s dynamic student arm, Youth Empowered in the Struggle (YES), fueled much of the activism.

YES members organized phone banks in April, at the start of the pandemic, speaking to voters in English and Spanish about a critical referendum in Milwaukee that promised $1.6 billion in funding to address disparities in staffing and programs in their local schools. It passed by a 76 percent margin.

“The students carried the momentum of that win through November,” says Mizialko, whose members serve as YES advisors. In the final month before the election, students canvassed five days a week to engage in socially distanced conversations with voters, averaging 1,000 doors per outing.

“Winning Wisconsin didn’t just happen in 2020,” Mizialko says. “It took years of working in coalition with partners, families, and parents, and listening to students themselves.”