Educators Who Survived Gun Violence Have Something to Say

Despite the horrifying experiences they share, these educators hold onto hope and resolve. “I want to show my students that it matters for us to stand up and show up." 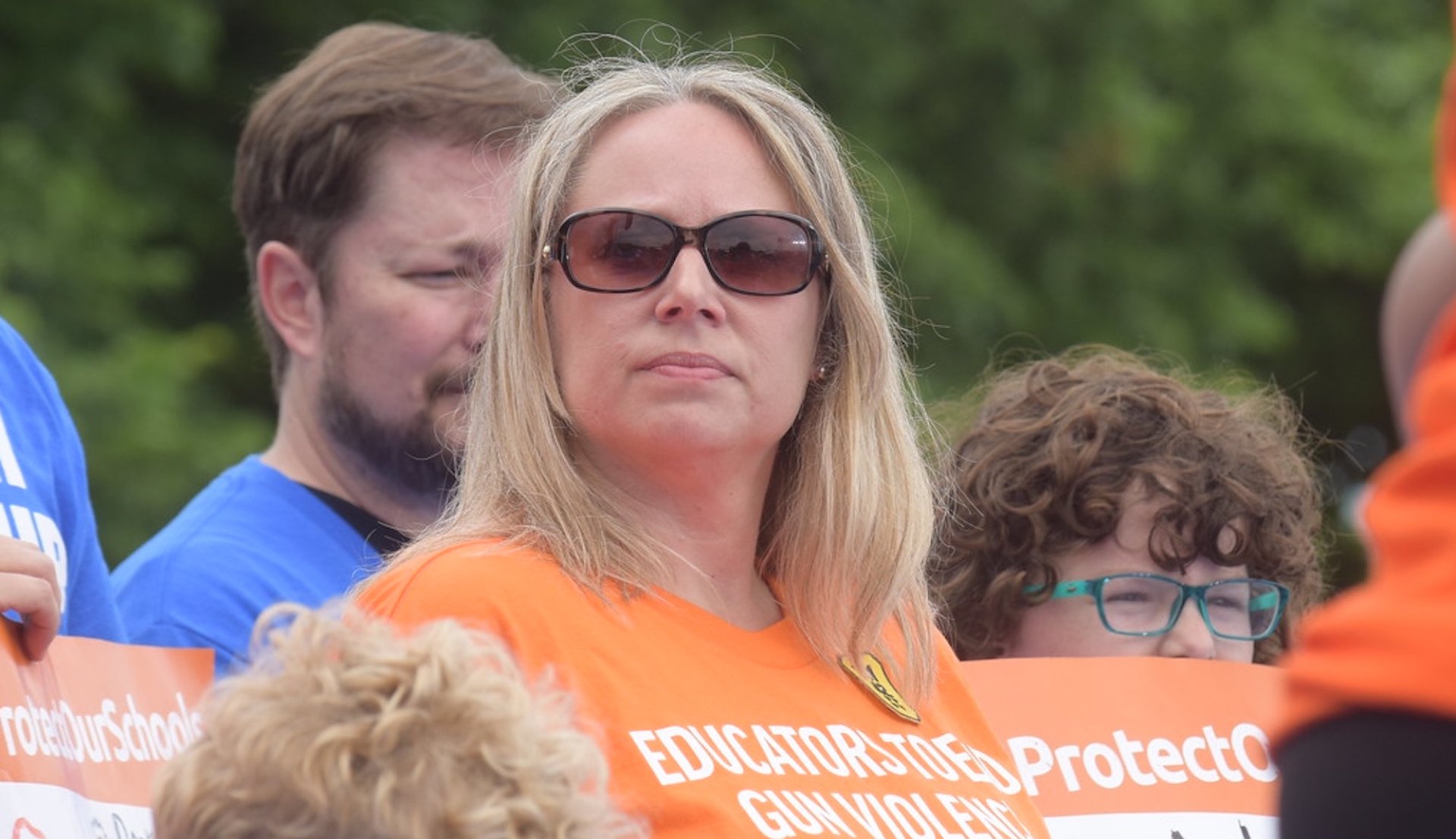 Patrick Ryan
"Our children are hurting and they’re angry—but they want change," says Melissa Gibbons, During a shooting at her school in 2021, Gibbons secured her students behind a double-locked door.
By: Mary Ellen Flannery, Senior Writer
Share

If today is like most days in the U.S., 111 people will be killed by guns. In churches, in movie theaters, in grocery stores, and in our schools—so many times in schools and on campuses—too many of our students will be cut down by gunfire.

NEA President Becky Pringle has had enough. “The time is now to stand up for students. The time is now to hold our legislators accountable,” she said during the March for Our Lives in Washington, D.C., on June 11. Educators from Columbine, Parkland, and elsewhere agree. Every day, these survivors live with their grief.

They also hold onto hope and resolve. “I want to show my students that it matters for us to stand up and show up,” said Lauren Rambo, a teacher at Michigan’s Oxford High School.

On Nov. 14, 2019, Holt was taping a maxipad to the arm of a gunshot student. Minutes earlier, she and her students had been listening to an audio recording when a group of terrified students burst in. Somebody’s shooting, they told her. Holt quickly took charge, calmly herding everyone into an adjacent office. Then a student told Holt she’d been shot.

Months earlier, when Holt first started work, she had been handed a gunshot kit. She ducked out to retrieve it from her classroom, and then used her iPhone flashlight to bandage an exit wound on the student’s torso. The student also revealed a gunshot wound on her arm. The kit was empty, so Holt used what she had, holding on until police arrived. “If you’re thinking about the safety of your students, it overcomes your fear. I never felt fear,” she says.

What Holt wishes everyone understood: “The shooter shot six people on my campus in 16 seconds. Sixteen seconds. It’s very frustrating to hear people say, ‘it’s not about guns.’ Having another gun on campus wouldn’t have made a difference. We had a dad, dropping off his kid, who was a cop with a gun—and he ran right in. And he was helpful in addressing students with gunshot wounds, but it didn’t change anything….

“The people saying ‘it’s not guns, it’s mental health,’ they have no idea what actually happens in these situations. Don’t get me wrong, I’m an advocate for mental health. But kids are not adults. They make stupid decisions, they have crazy mood swings, they do these impulsive things. The shooter on my campus had a quote-unquote good life. He ran track. He had a girlfriend. And still he ordered parts on the internet and put together a ghost gun, and nobody has any idea why! It’s discouraging to keep hearing these arguments from people who haven’t experienced this. They have no clue. The only thing that will help is less guns.”

On Nov. 30, 2021, Rambo was working at her desk when she heard “noises that didn’t sound right.” She recalled from her training that gunshots can sound like that, and ran to the hallway, where students were sprinting past. She pulled her students into their classroom, securing them away from windows. One of her students had stopped in the bathroom on his way to class. “He didn’t make it,” says Rambo. He was discovered in the men’s room by the 15-year-old shooter and shot to death. Three additional students also were killed.

How things have changed: “With Covid, I had already become a more flexible teacher, a more caring teacher who really thinks about things happening outside of the classroom, and this has really solidified that for me,” she says. But her compassion does not extend to lawmakers.

In May, an 18-year-old shot to death 19 students and two teachers in Uvalde, Texas. “When Uvalde happened, I felt nothing but anger. Then I understood that we have to do something. Those of us who survived have a unique opportunity to bring our perspective and passion to this fight. Some of my students told me they weren’t sure they would go to our local March for Our Lives because they didn’t think it would make a difference. I want to show them that it matters for us to stand up and show up.”

On April 20, 1999, Zach Martin was a freshman at Columbine. Today, he’s also a teacher there. In June, he also came to Washington, D.C., to participate in March For Our Lives. “I’m here today as a survivor, as a teacher, and as a dad,” he says.

What Martin says about the importance of hope: “As a survivor, I think it’s important to maintain hope and momentum for change, so families and communities don’t go through what we did 23 years ago. As a teacher, I don’t want to walk into classrooms and wonder what I could use to barricade the doors. And as a father—and as educator—I want kids to be safe… After 23 years, it’s hard for people to maintain hope. I get that. I kind of look to March for Our Lives as an inspiration, with young survivors leading the way. It refills my cup of hope.”

On November 20, 2014, moments after a recent FSU graduate opened fire from an access ramp to the campus library, Jennifer Proffitt’s Twitter erupted. “Students were [tweeting]: ‘Who was at the library?’ ‘How could this have happened on campus?’” she recalls. Students were scared and horrified that somebody had brought a gun onto campus—a place that felt like a sanctuary to them—and wanted to ensure it never happened again. “But state legislators took it the opposite way, saying we needed more guns on campus, and the next [legislative] session they had a statewide ‘campus-carry’ bill,” she recalls.

Proffitt, who was president of the faculty union at that time, brought together students, faculty, campus police chiefs, religious leaders, and others from around the state, to successfully oppose the bill. “I remember a Senate hearing, where all the police chiefs were sitting with us,” she says. “So many groups came together to keep guns off campus.”

How the fight never ends: Every year, some Florida lawmaker files legislation that would enable students to carry concealed weapons into state university classrooms and other campus buildings. “In the last few years, it hasn’t gotten a hearing, but our governor has said he wants to sign a bill allowing for ‘permit-less’ carry before he leaves office—and that’s terrifying!”

On April 20, 1999, the day that two Columbine High School teens murdered 12 students and one teacher, Cris Welch was a sophomore at Columbine. Today, he credits the Columbine teachers who survived alongside him with inspiring his career choice. “The support and strength that I garnered from my educators, especially in the following two years, as a junior and a senior… I was so impressed by what they put forth, for our sake. There’s not a day that goes by that I don’t think about those lessons learned and how I can impart them to my students.”

Why Welch came to Washington, 23 years after Columbine: Welch, his wife Larissa, also a Columbine teacher, and their infant daughter came to March for Our Lives in Washington, D.C., because not enough has changed since Welch fled his math class 23 years ago. “When deciding to come out to Washington, my daughter was my primary motivating factor. I want her to have a safer environment than I ended up having—and a safer environment than students have today.” As a world historian, Welch knows how societies can adapt and change. He remains hopeful. “I truly believe we are at a crossroads—as a people, as a culture—and we have the ability to make positive changes.”

"On Nov. 30, 2021, I was doing hall duty when I heard gunshots and saw students running around the corner. I immediately started shoving students into classrooms. It was quick, but I was certain of what I heard. I knew it was not a drill. My students and I did everything we needed to do, getting in a corner, moving desks, putting the knife lock in the door. When I got them secure, it dawned on me—my own kids were at school, too. All I can say is thank God for cell phones.…"

How she feels today: Angry. “After Uvalde, I’m more angry that this keeps happening. I don’t know what the right answer is—but I know what we’re doing is not right.” But also hopeful. “It’s my students. It’s my own children. Our children are hurting and they’re angry—but they want change. Looking at everything they’ve been doing since November 30 is actually very inspirational.”

On February 14, 2018, Jim Gard was teaching a math class at Marjory Stoneman Douglas High School in Parkland when he heard popping noises. Maybe firecrackers, he thought. Then the fire alarm went off. Gard’s students headed down the hall, but a Code Red announcement turned them around. Some returned to his classroom; others sheltered nearby. While all of Gard’s students were safe, 14 students and three educators were killed.

What he says about kids today: Gard just completed his 41st year of teaching. “There is no true difference in the things kids do today and what they did when I first started. It’s still all hormones in tennis shoes. What’s different is that we put so much more pressure on them—and the gun laws have softened up. You can’t even drink until you’re 21, but you can buy an assault weapon?”

Instead of working on common sense legislation, Gard’s lawmakers talk nonsense. “They want to give teachers guns. What the heck is that going to do? You just had 19 police officers with guns [in Uvalde, Texas] and it did nothing. It’s crazy. You don’t even trust us to pick our own books!”