The Every Student Succeeds Act: Four Years Later, How Much Progress?

ESSA has bought new opportunities for schools and students, but the work to ensure the law makes good on its promise continues.

It’s been four years since the test and punish era of No Child Left Behind was replaced with the Every Student Succeeds Act. Although the new law transferred decisions about school improvement and accountability to states and districts, public schools are still in the process of implementing the law and ensuring it makes good on its promise to ensure equity for all students.

The panelists agreed that four years is a long time for students and parents waiting for equity and improvement in their schools. In four years, a student graduates high school; in four years elementary students are getting close to middle school. But finding the best ways to apply the flexibility and implement new practices from nearly a decade of the harsh testing regime of NCLB is an arduous process.

To be sure, there are many successes and new opportunities, but some states haven’t had the capacity to take advantage of the innovations built into the law, Pringle pointed out.

Referencing Eleanor Roosevelt’s speech “Human Rights in the Small Places”, she said the changes much take place “in small places, close to home.” In the case of ESSA, that means in schools, around a table, with local stakeholders like parents, community members, and of course, teachers. 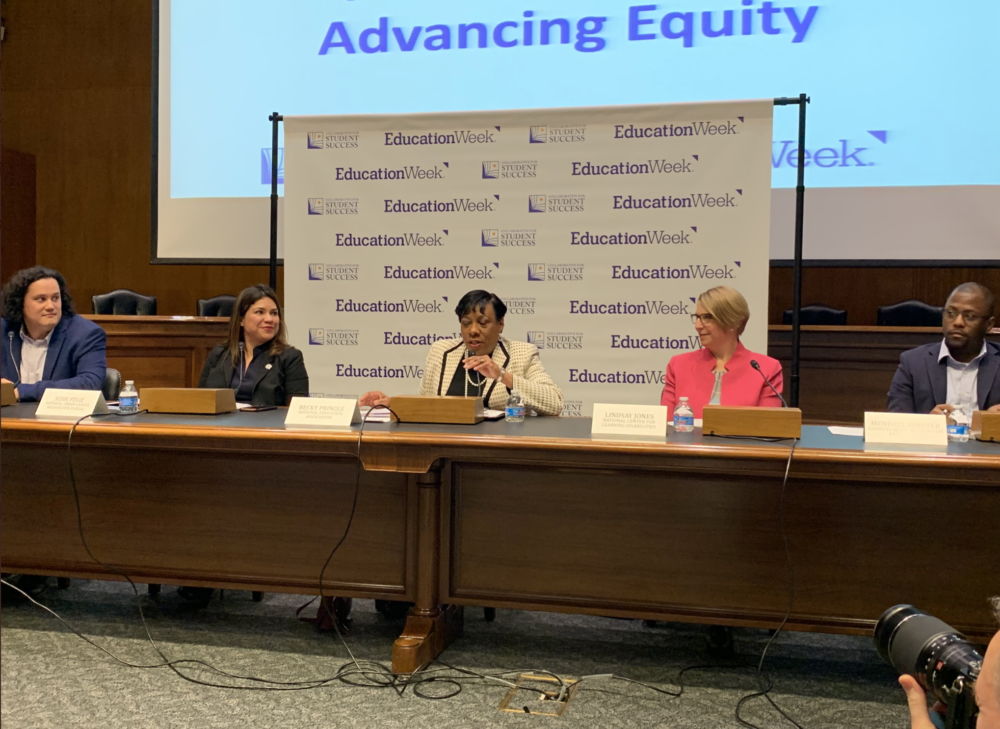 NEA Vice President Becky Pringle (center) at a panel discussion on the Every Student Succeeds Act.

“For far too long this nation has not lived up to its promise to students who are continually underserved…” Pringle said. “Arts in the schools…Nurses, counselors, librarians, access to AP courses, all takes money. We know students can’t learn if they’re hungry or if they don’t have eye glasses if they don’t feel respected and honored for the cultures they bring to the classroom. Those opportunities matter and for decades we spent time and money on tests, and not even in a comprehensive way.”

Pringle challenged policymakers and administrators to go into their state’s best schools with a clipboard and make a list of all the things those schools have that make them great. This includes arts, AP courses, nurses, counselors, top technology, up-to-date textbooks and media centers, a diverse teaching force, a welcoming school climate with restorative discipline practices that don’t fuel the school to prison pipeline. They should then take that clipboard to low performing schools and see what’s missing. That is where the promise and opportunity of ESSA is found.

“We worked hard to get those indicators of what makes a great school into the law, now we need to see them become part of state and district plans and implementations,” she said.

To successfully implement the promise of ESSA, Pringle added, let educators take the lead, give them the information they need to take their seat at the table and be leaders of change in their schools.

Success in the States

NEA members were critical partners in the development of their state plans. In Louisiana, the state opted to include opportunity indicators that were still focused on assessments. Educators rallied to limit testing time, and they helped pass a measure that limited testing on all standards-based assessments for public school students per school year to no more than 2 percent of the minimum number of instructional minutes per year. 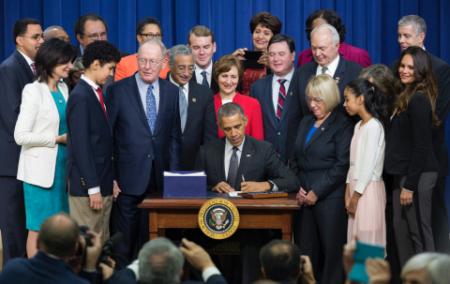 President Obama signs the Every Student Succeeds Act into law on Dec. 10, 2015.

In Fairbanks, AK, NEA members have been hosting site-based conversations about ESSA opportunities and conducting equity audits with other educators to provide the district with a better picture of what changes need to happen to elevate the learning environment for all students. In some areas, members are moving school board policies around getting a seat at the table.

Educators in Mundelein, IL, acted as community liaisons and were able to increase parent involvement in their schools to ensure that all voices were heard.

Around the country at the school level, educators are hosting listening sessions with peers to learn more about how they can best support their students. They’re attending racial and social justice trainings and taking those lessons back to their school sites so they can ensure that all students, regardless of zip code, have every single resource needed to succeed.

In Camden, AR, education support professionals partnered with the local faith-based community to identify what the community believed the schools top areas of improvement should be.

But even with those successes, ESSA will not bring about significant change if “we don’t take on racial justice,” Pringle said.

“I want to be really clear about this. There is an interlocking system including everything from housing to healthcare, all of which impacts what’s happening in our schools. If we don’t face racial justice head on, we’re just tinkering around the edges. And we will not ensure all students get what they need.”