The Evidence is In: 'Happy' Schools Boost Student Achievement

A positive climate, most education stakeholders agree, is on most schools' wish-list. Schools do not aspire, after all, to create environments that are detrimental to students and educators. But the No Child Left Behind era - a decade plus of "test and punish," a stripped down curriculum, and narrow accountability measures - decoupled school climate from student achievement, in effect imposing a "nice schools finish last" credo. Sure, a "happy" school would be nice, but ... about those test scores.

School climate and student achievement should never compete with each other, according to Ron Avi Astor, a professor of social work and education at the University of Southern California.

Astor and three colleagues recently combed through research dating back to 2000 - 78 studies of school systems in the U.S. and overseas - and found substantial evidence that positive school climates contribute to academic achievement and can improve outcomes for students, especially those from lower socioeconomic backgrounds. The report was published in Review of Educational Research, a peer-reviewed journal of the American Educational Research Association, in November.

In their analysis, the authors also found no correlation between socioeconomic status and perceptions of school climate. Students in high-poverty schools were not necessarily more likely to be in adverse environments than their more affluent peers.

“It makes little sense to guage whether a student feels safe at school but not ask the teachers or administrators the same question. Everybody’s perspective matters, and that includes bus drivers, custodians, school secretaries, and, especially, parents”- Ron Avi Astor, University of Southern California

This suggests that lower-income schools can nurture more positive climates, which, explains co-author Ruth Berkowitz, "have the potential to break the negative influences that stem from poor socioeconomic backgrounds and to mitigate risk factors that threaten academic achievement.”

As a caveat, the researchers note that an obstacle to more detailed analysis is the absence of a clear and uniform definition of school climate. Without it, "the ability of researchers and stakeholders to evaluate school climate growth over time is restricted," Astor concedes.

Despite the inconsistencies, certain attributes emerge more than others. Many educators, for example, instinctively tie school climate to school safety. But a positive school climate can also depend on how connected or engaged a student feels in school, the strength of relationships with school staff, and the state of parental involvement.

Schools have different needs, which is why climate improvement programs should be "tailor-made to their requirements and social and organizational characteristics, rather than only importing external models that proved effective elsewhere," the report states.

The researchers also recommend that a school's climate survey incorporate the entire community. Surveys have tended to focus solely on student perceptions, since they are seen as the "customer" or "client." But this narrow scope weakens the foundation of the effort.

"It makes little sense to guage whether a student feels safe at school, but not ask the teachers or administrators the same question," Astor explains. "Everybody's perspective matters, and that includes bus drivers, custodians, school secretaries, and, especially, parents." 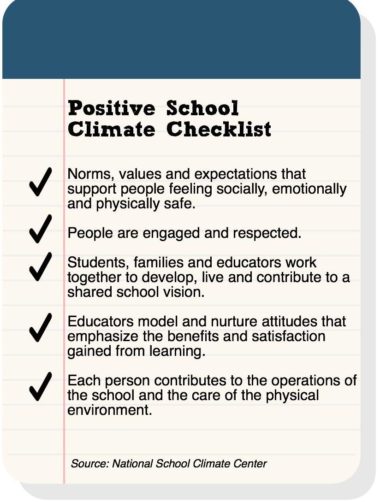 "Meaningful involvement of school community members in considering what kind of school they want allows for the development of a shared vision with associated core values," he adds.

This is a major challenge and probably requires a culture shift in the way we think about our schools. Too many are struggling to shake off the NCLB legacy of high-stakes standardization before they can focus more on the skills that can foster social and emotional well-being. The report recommends that district leaders look at the potential of subjects such as the arts, physical education, civics - key components of the "well-rounded curriculum" - to foster a more positive climate.

The good news is education leaders are thinking more about the issue. In May, the U.S. Department of Education released a slew of resources to help schools create climate improvement plans.

Also encouraging is the Every Student Succeeds Act's inclusion of "non-academic" factors in evaluating schools. The law, passed by Congress last December, mandates that at least one "non-academic" indicator - school climate included  - be incorporated in state accountability plans. (Learn more at GetESSARight.org)

Schools that have infused academics with climate and vice versa are the ones that tend to perform best over the long term.While some of these schools are in the United States, there are many lessons we can draw from overseas. The ultimate outcome is a climate that runs through everything the school does, says Astor. "You want it to be your school's central air conditioning."

And like central air conditioning, malfunctions occur - but that's OK. Sustaining a welcoming, respectful and constructive environment is a proverbial work-in-progress.

"You think you've reached Nirvana but that inevitably doesn't last," Astor says."A few years ago, who would have thought we would be dealing with Donald Trump and the impact his language had has on many students, who suddenly don't feel as safe at school anymore? This is a serious setback, but schools that have already nurtured and sustained positive climates are better prepared to adjust."