Are you ready to ditch the classroom desk? More educators believe flexible seating is key to teaching 21st Century skills. 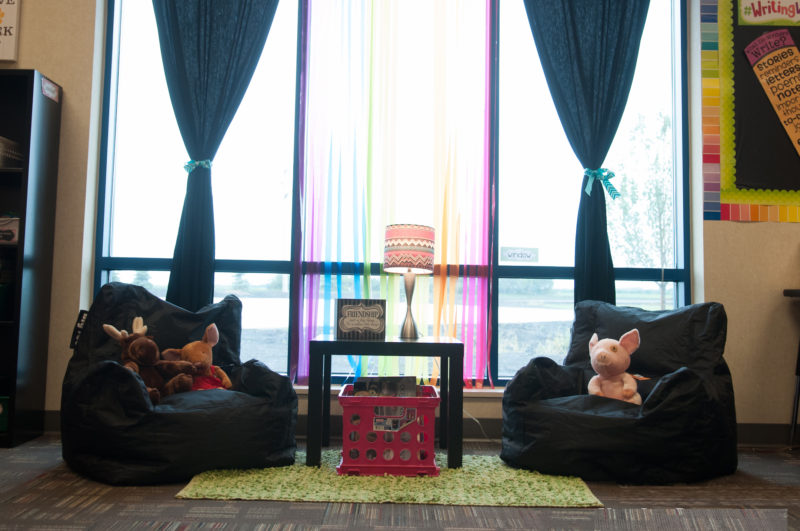 While many iconic features of traditional classrooms have been sidelined over the past decade - less blackboards,  more whiteboards, bulky textbooks supplanted by laptops or iPads - the classroom desk has shown real staying power. And why not? There is something orderly, functional and maybe even comforting about students sitting behind rows and rows of desks all facing the teacher.

And for new educators especially, messing with the classroom furniture could invite additional classroom misbehaviors - not exactly a priority item on their to-do list during the first week of school.

When Kayla Delzer, a 3rd grade teacher in Mapleton, North Dakota, began her teaching career nine years ago, she may not have been quite ready to "ditch the desk," but she had plans for them.

"I didn't like the rows of individual desks," she recalls, "They didn't really help the way I wanted to teach, how I wanted my students to interact and work together."  Delzer immediately rearranged them into groups of desks, or "pods" as she calls them, to create a more collababorative, less-siloed classroom.

Her inspiration? Starbucks and college lounges - spaces where students can sit comfortably and still concentrate on their work. "I just began to wonder, 'why can't my classroom look like this?'"

But why should it? Isn't this just change for change's sake? Doesn't replacing classroom desks with coffeehouse furniture fall under 'if it ain't broke, don't fix it?'

But it is broken, says Delzer.

"Classrooms need to look different from how they did one hundred years ago, but we’re still seeing rows and rows of desks. The skills students need these days - 21st Century skills - can’t really be taught properly in a classroom where you have created islands of desks," she explains.

Although standing desks have become a visible presence in classrooms, educators have more ambitious plans. Oskar Cymerman, a high school science teacher in Minneapolis, also invokes the almighty coffeehouse chain in his decision to redesign his classroom, and he urges every educator to at least consider "reimagining" their own.

In a Teaching Channel post written in August, Cymerman argues that the "Starbucks environment" can promote the freedom and movement necessary to reinvogorate classrooms to create more room for collaboration, creativity and problem-solving:

I've become convinced that traditional educational settings dull the senses. We know that breaks and interruptions after periods of focused activity actually help in learning, yet we ask our students to sit still for an hour or more with little freedom of movement....I’ve come to the conclusion that desks promote compliance, while coffee shop-style seating encourages community-building through increased and intentional emphasis on communication and collaboration."

While the idea of modeling a classroom on a Starbucks coffeeshop may elicit skepticism (and even a few groans), the move to more flexible seating is grounded in research that points to real gains in student health and classroom engagement.

The Flexibility of a Deskless Classroom 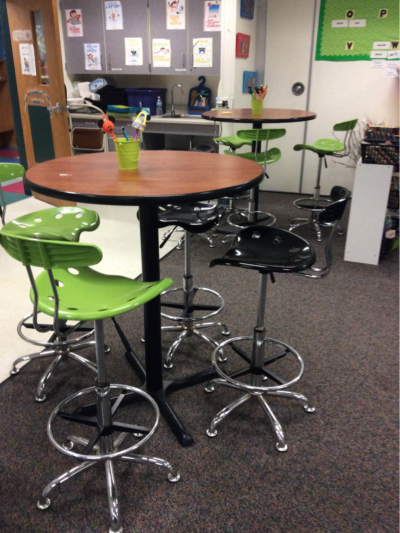 Holly Albrecht was equipped with this research (specifically findings by the Mayo Clinic on the effects of sitting on student obesity) when she made the pitch to the district superintendent as she prepared to move to Hartland South Elementary School in Waukesha, WI, five years ago.

Albrecht's interest in redesigning her classroom was sparked  at Hartland North by a student with ADD who couldn't stop fidgeting in his chair. "He wasn't able to sit still, and was having a really hard time staying on task and being engaged," she recalls.

So Albrecht tied an exercise band around the legs of the desk, which enabled the student to bounce a little without distracting the other students. The change was immediate. Just that little movement helped him stay more engaged.

"From that point on," Albrecht  says," I thought more about changing the entire classroom." After the superintendent gave her the green light, Albrecht went to work.

Cafe tables and chairs, a couch, pilate balls and hokki stools. were moved in and the desk were moved out. Being able to  choose where in the classroom they learn - sitting on a stool, on the couch, in groups on the rug - has improved concentration and engagement.

Five years later, Albrecht hasn't looked back and her colleagues have followed her lead.

"Every teacher has changed their learning spaces. If you walk through our school today, you won't see a desk anywhere," Albrecht says.

Which is not to say that they all mirror Albrecht's classroom.    Each space is configured differently, depending on what works for the teacher and, more importantly, for the students. This flexibility is central to the appeal of a more open learning environment.

Lauren Cluff takes an approach that is best summed up as "accommodate as needed."  An elementary school teacher in Mesa, Arizona, Cluff swapped out desks for tables four years ago to foster more group work. The tables are arranged along the perimeter of the classroom, freeing up a large space in the middle where a rug and an assortment of cushions reside. A couch sits near the back of the classroom.

Overall, says Cluff, her arrangement seems to be a practical middle ground.

"I've seem photographs of these beautiful classrooms that look more like homes, but I sometimes have as many as 37 kids in my classroom," says Cluff. A complete classroom makeover with multiple seating arrangements would undoubtedly be a challenge.

For Cluff, it's the openness of her classroom that provides the collaborative space and the ease of movement to keep students "awake and engaged."

How It Can Backfire

Cluff is quick to point out that her redesign wasn't expensive. Replacing classroom desks with more flexible seating can be a budget-buster.

Hokki stools and new couches can be costly, but Kayla Delzer urges interested educators to look at less-expensive options, such as yoga or bath mats and crate seats. A lot can also be  done with existing classroom furniture. For example, take the legs of a table and lay it on the floor surrounded by pillows. Some educators use bed-risers to turn desks into makeshift standing desks. 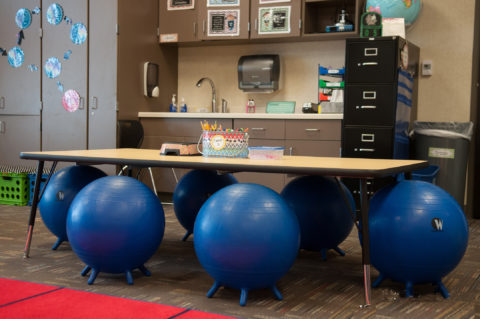 When Kayla Delzer redesigned her classroom, stability balls were just one of the seating options. (Photo: Kaia Lea Photography)

Money isn't the only obstacle. Teachers will likely face a level of skepticism from parents, says Albrecht.

"There was a little work to be done in getting them on board, but once they saw the classroom and heard from the kids how much they were enjoying school, their reservations disappeared pretty quickly," she recalls.

Beyond these challenges, any educator looking to ditch the desk should keep in mind one straightforward but supremely important fact: Furniture is still just furniture.  That is, replacing desks with pilate balls and sofas won't accomplish much of anything unless the teacher is prepared for the change.

In fact, says Delzer, making the switch may backfire. It's not just an issue of having top-notch classroom management skills (though this is critical), but educators must be ready to surrender a degree of authority.

"A shift in mindset is necessary, more so in the teacher than in the student," she explains. "You're going from a teacher-centered classroom to a student-centered classroom. You have to let go of some of power. That can hold teachers back."

That important step, if taken, is the first in a process that can produce a more dynamic learning space for students,  one that isn't compatible with  "24 islands of desks," says Delzer.

"I know my kids are more engaged, more motivated, and more productive. The improvement I saw in a lot of the skills that I care about - communication, collaboration, determination and perseverance - came about only because we switched to flexible seating."