Few Conversations About Race and Identity Are Happening at Home. Can Educators Help?

A new study examines why parents and educators should work together to celebrate differences and explore social identities with children and students.

Since 1969, the Sesame Workshop, creators of “Sesame Street,” has made concerted efforts through its programming to create a positive sense of self by celebrating differences and exploring social identities like race, gender, religion, social class, and more to help grow smarter, stronger, and kinder kids. However, based on the findings from a major national study by Sesame Workshop and NORC at the University of Chicago, parents today are not having frequent conversations around key social identities with their children.

NEA Today spoke with Rosemarie Truglio, senior vice president of curriculum and content at Sesame Workshop and Derrick Gay, a former classroom teacher, an expert on issues of diversity, inclusion, and global citizenship, and a research advisor for the "Identity Matters" study, to learn how educators and parents can work together to have these important conversations.

The study reveals that parents are comfortable talking about identity, but don’t do it—particularly parents who come from dominant groups (white, Christian, straight, middle class, highly educated). Why aren’t they talking about it?

Derrick Gay: There are a number of reasons. First, there is a lack of awareness. If someone belongs to a dominant group, they just may be unaware that individuals are navigating the world differently. Also, depending on where and when you grew up regionally in the United States, there’s a sense that you’re not supposed to engage in these conversations. Good people don’t talk about race, and that’s how you know “I’m not racist because I don’t see it; I don’t talk about it.”

Another issue is color blindness or identity blindness. Many people have been raised to think that a better world is one where everyone is equal. If everyone is equal, then you don’t see differences. If you don’t see differences, then there aren’t problems. A final reason is fear of engaging in these conversations, especially with children, because it may be developmentally inappropriate: “I shouldn’t talk about these differences because children don’t see these differences.” In fact, the research finds that children begin to understand themselves as racialized beings between three and five years old in the United States, and children of color at earlier ages.

Rosemarie Truglio: Additionally, parents may not have this firm understanding of children’s cognitive development, how they grow and develop, what these early years represent, what goes into that foundational learning, and what their role is for preparing children for school and life.

Meanwhile, many teachers discuss some social identities more regularly. How can educators bring parents in on these conversations without crossing boundaries?

DG: We want to partner with parents. The work I do in schools not only provides professional development for educators to support their ability to design lessons that increase student awareness, and cultivate this open mindset with students, but we’re preparing families, parents, and guardians as well. To your point, teachers are afraid of infringing upon the values of families and would not want the parent to be blindsided.

"While a large majority of parents say they are comfortable talking about social identity factors, few are having discussions about identity on a regular basis. Only 10% of parents report that they often talk with their children about their race/ethnicity; another 28% say they sometimes talk about race/ethnicity with their children." - from "Identity Matters", Sesame Workshop

Should educators take the lead on talking about the importance of social identities?

DG: I think that schools have a responsibility and a public purpose to provide students this education, but also to include families in this work. The research is conclusive, we know children are aware of these differences, and we also know what happens when we don’t have these conversations: stereotypes, prejudices, and biases that are inherent in our society become solidified.

RT:  In terms of partnership, we’re talking about teachers and parents, but administrators, too. Teachers need to be supported by the administrators…it’s the whole school culture.

DG: That’s absolutely right, and that emerged in the "Identity Matters" survey. One of the reasons teachers indicate they sometimes fear entering these conversations is that they’re uncertain of the support they may or may not receive from administrators, the district, or principal.

The study says parents of color are much more likely to talk to their kids about identity than their white counterparts. The same goes for recognizing social identity’s impact on a child’s future. How can educators help all parents, particularly dominant groups, see the value in having these conversations?

DG: I believe the first entry point is reframing how we understand diversity. Currently, when we talk about diversity, people understand it as meaning "different" as opposed to "differences." There is an implicit, “normal” group that we don’t name, and then we say there are these groups that are “different”: people of color, LGBTQ, or non-Christians, to name a few. So then by definition, diversity becomes "those people.” If I am white, straight, Christian, or highly educated, then this space is inherently not for me…The first thing we need is to reframe the word “diversity” in a way that’s more inclusive of all identities.

Diversity should represent mirrors and windows: people should be able to see themselves, but they should be able to connect with other people who are similar and different. It’s a wonderful framing for empathy. I use Sesame’s definition of empathy because it’s simple: understanding and caring about the feelings of others. If I don’t have a space where I can learn about others or see myself within diversity, then we’re undermining the goals of diversity. When we reframe diversity in that way, people from dominant groups began to understand they have legitimacy in this space. But we must also speak about inclusion. Society does not value all identities equally, so we must be intentional in our efforts to cultivate a sense of belonging and connectedness.

RT: We have to inform and educate. Parents simply may not know. One of the things we learned from Derrick early on, is this shush factor. We know from child development that when a child does ask a question about the differences they see, they’re asking that question based on their observation, curiosity, and interest. When they do pose a question about differences, a parent who is uncomfortable may shush rather than engage in the conversation. This is why Sesame Workshop decided to do this study—not just to get information from parents, but to get information from educators as well, and to inform our society. 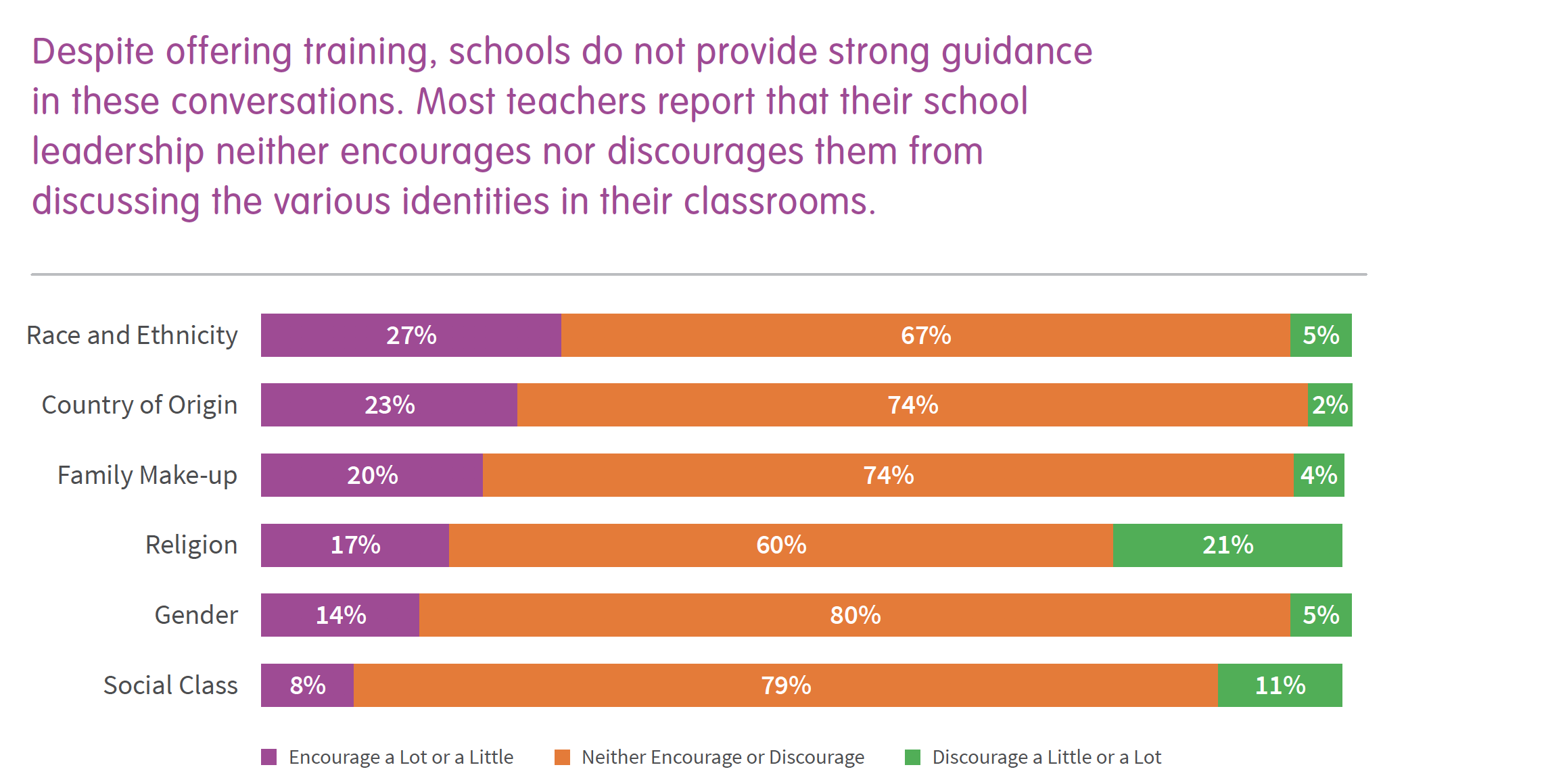 If conversations around identity and its impact on the future of children continue to lag, what would concern you the most?

RT: We’re going to continue to see so many problems in our society, and that’s the beauty of this study: we have the data now to reconfirm that this is a huge issue. We need to have these conversations. We need to get this information and other resources out because we have an empathy gap. If we don’t start having these conversations this empathy gap is just going to continue to grow.

DG: That’s my greatest concern: the empathy gap. If we continue to not know about ourselves or others and continue to retreat to our tribes, we continue to act in ways that disproportionately disenfranchise our most vulnerable in our society, and then, if we don’t have empathy—if we’re unaware—then we don’t care and we become desensitized.

What actions can educators take?

DG: The most impactful action that educators can take is to learn more about themselves. The more you know about yourself, the better sense you have of the framework that informs how you see yourself, those similar to you, and those different from you. The greater humility you have to recognize that you’re a good person and you have implicit biases—we all do—and acknowledge habitual ways you do things that may not be inclusive, that’s going to heighten your awareness. This will help identify your growth areas and encourage parents to partner with you in this work.

Second, reflect on what you have always done or what you are comfortable doing, and educate yourself around the research. Find out what young children actually understand about themselves and others. Encourage parents to partner with you in this work. For schools, continue to provide meaningful and sustained professional development around this work. Professional development that’s well designed, grounded in research, and personal and relevant to the classroom and region.

Also provide the how-tos. That’s the biggest complaint I receive from teachers and it’s warranted. We have this meaningful workshop; you’ve heightened my awareness; now I have a sense, at the very least, that there’s more than what I think. Now, what does this mean for my classroom? How do I talk about this to three-year-old students? So just as important to providing content awareness is also to provide instructional practices to support teachers.