A new "report card" grades each state on commitment to public education and resistence to charter schools and voucher programs. How did your state rank? 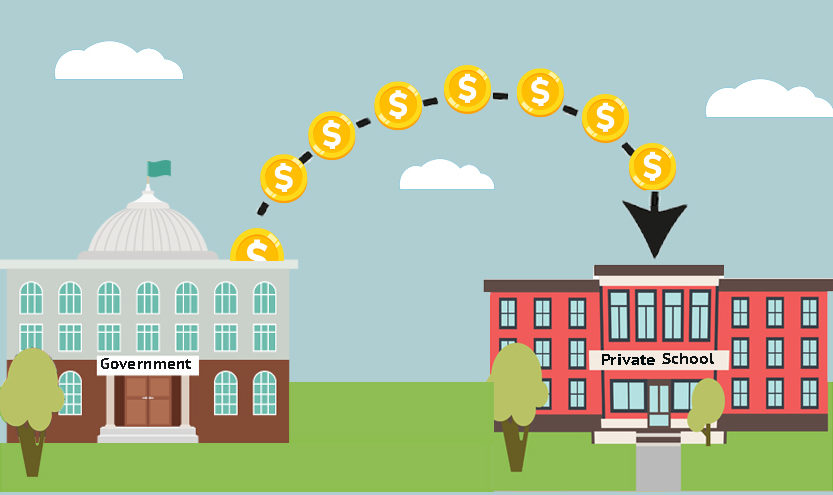 According to a 2017 national poll, a strong majority of public school parents give the traditional public schools in their neighborhoods either an A or a B - higher grades than they have given in years. The same survey also found that the majority of the public believes that lack of funding is the biggest problem facing schools today.

While creating and supporting great public schools should be the focus of lawmakers across the country, the reality is quite different. The commitment in state legislatures to the "great equalizer" that is public education has eroded quite dramatically.

That is the sobering conclusion of a recent report released by the Network for Public Education and the Schott Foundation titled "Grading the States: A Report Card on the Nation's Commitment to Public Schools."

“Grading the States” examines the far reach of the school privatization movement and its impact on public schools and students. Across the nation, states have implemented and expanded charter schools that are unaccountable to the public and voucher programs that have siphoned off public taxpayer money to pay for private school tuition.

The proponents of these policies and the corporate interests that bankroll them insist their goal is to improve the quality of education – a dubious claim, the report states, “in the face of the reality that too often there is little to no public accountability, fiscal transparency, or maintenance of civil rights protections for students in privatized programs.”

Private schools and charters are not designed to serve all students, but this hasn’t stopped these programs from establishing a strong foothold in communities across the country. Every state except three have charter schools and 28 states have in place some sort of school voucher program. The trend - which shows little sign of letting up - has sown exclusivity and division into the educational system and depleted public schools of valuable resources.

"Although parents always have a right to send their children to private schools at their own expense," the report states, "they are not and never can be the model for educating all of this nation’s children, nor should they be supported by public dollars."

The researchers assigned all 50 states and the District of Columbia with a letter grade, deducting points based on the presence of charter schools and voucher or "neo-voucher" programs (merely voucher programs tweaked to circumvent legal restrictions against giving public money to private schools through tuition tax credits and education savings accounts.) 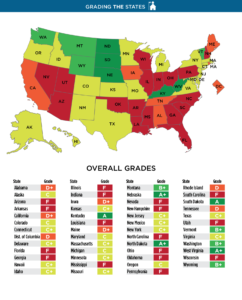 In "Grading the States," higher grades were assigned to states who resisted public funding for charter schools and voucher programs. Only nine states received an over all grade of A or B. (Click to Enlarge)

States were awarded an A+ if they have successfully resisted public funding for privatized alternatives. The top ranked states are Nebraska (99.5 score), North Dakota, and West Virginia. Kentucky and South Dakota received an A.

As the report makes clear, it's no coincidence that rural states received the highest marks. Many rural areas are strapped for cash and most residents have no appetite for draining already-scarce funds out of the education system. Still, not all rural states have followed this path, and Kentucky, it's noted in the report, may see its A rating disappear if lawmakers find the money to fund its recent charter school law. So far, no such schools have opened in the state.

The state with the worse overall score was Arizona (31.5), followed closely by Florida (35.5).

California is ranked near the middle with an overall score of 66.7. California has the largest number of students enrolled in charter schools (568,800, representing over 9 percent of all public school students in the state) but the state has so far successfully turned back attempts to divert taxpayer money to pay for private school vouchers.

Merely having charter schools and/or vouchers didn't automatically generate failing grades. The researchers looked at a state's specific school privatization program, deducting points for failing to protect students’ civil rights, charter school accountability and oversight shortcomings, a lack of transparency, and poor charter school performance. While charter schools in California fail to meet these benchmarks, Virginia lost fewer points because its nine charters must be authorized by the public school district - evidence of some level of oversight.

These are the major findings in each category:

Overall Civil Rights Protections. Charter schools and voucher programs allow for institutions to circumvent civil rights obligations that are mandated to public schools. Charter schools often have  “strict codes of discipline, a lack of free or reduced lunch programs and free transportation, and curriculum with a religious bent” that makes them increasingly exclusive. Of the over three-quarters (75%) of all states with privatization programs, 19 fail to include additional state and local civil rights protections for students.

Although parents always have a right to send their children to private schools at their own expense, they are not and never can be the model for educating all of this nation’s children, nor should they be supported by public dollars."

Accountability and Oversight. At most charter and private schools, requirements for teacher certification, testing practices, financial disclosure, and facility maintenance are not upheld. Neo-voucher programs, such as ESAs and Tuition Tax-Credits create even more challenges because they have virtually zero accountability while further draining public funding. Arizona's ESA program, the largest in the country, "expects no evidence or monitoring of student achievement," according to the report.

Transparency. While public schools are run by elected school boards and have full transparency regarding disciplinary practices and student achievement, rarely any information about voucher programs and charter schools is shared with the public.

Charter Schools. Thirty states prioritize children of board members or employees in the enrollment process, with little to no conflict of interest requirements. Children with disabilities are not provided for and are often excluded in admissions in 39 of the 47 states with charter schools.

Loosening privatization's grip requires a moratorium on new charter schools and voucher programs, according to the report. The authors recommend a phasing-out of existing programs so as to not displace children currently in the system. Charter schools should be "absorbed" completely into the public school system to ensure that they are governed by the taxpayers whom the district serves.

Educators and their unions have been leaders in pushing back against school privatization, particularly in preventing school vouchers from gaining a foothold in many states, including California, Idaho, and New Hampshire, and thwarting efforts to expand existing programs, most notably in Arizona. The dismal record of these privatization initiatives has fueled the nationwide mobilization of educators demanding lawmakers support public education.

"While it is easier to transfer public funds to private entities than to undertake the challenging work of fixing our public schools," the report concludes, "it is fruitless and short-sighted to divert resources from the public schools that serve the vast majority of students. ... Just as this nation was intentional about the establishment of the public education system, we must continue to be intentional about the urgent need to prioritize a quality public education for all students and not privatize the educational system for the benefit of just a few."

Join the fight against school vouchers at vouchers.nea.org

Sara Luster contributed to this story