Fighting for the Schools That Minnesota Students Deserve 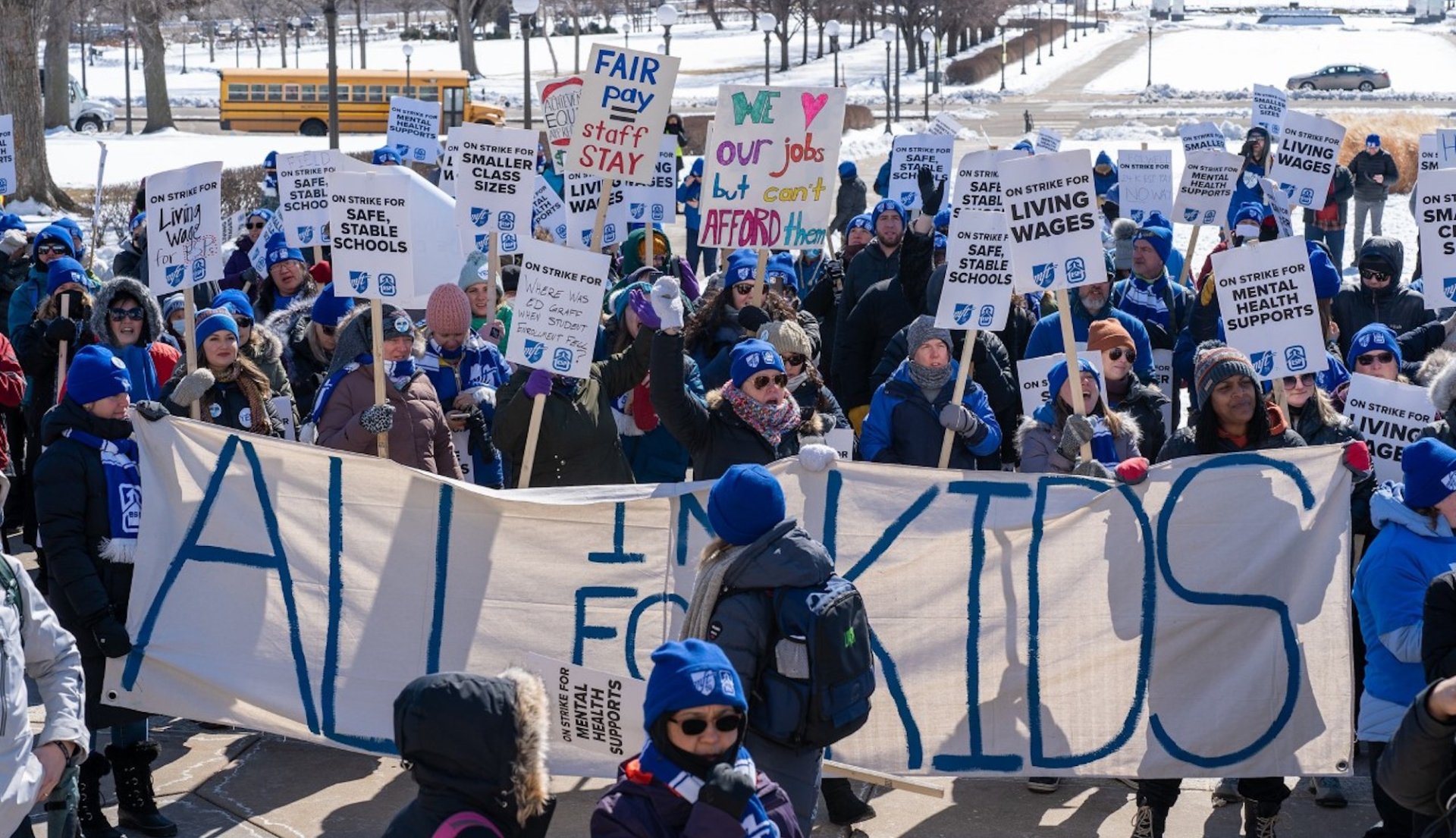 [Editor's note: Minneapolis educators settled their strike after three weeks, winning class-size caps and increased mental-health supports for students, including the guarantee of a nurse, school counselor, psychologist, and social worker at every secondary school, and one social worker at every building. They also won significant wage increases for ESPs, including a one-time payment of $6,000 and wage increases between two to four dollars per hour.]

It’s a tale of two cities in Minnesota this week.

While Minneapolis educators enter the second week of a historic strike, fighting for their students to get what they need and deserve, they only need to look across the Mississippi River for an example of what’s possible.

Last week, just hours before their own planned strike, members of St. Paul Federation of Educators (SPFE), a union of more than 3,500 teachers, licensed staff and educational assistants, negotiated a tentative contract that will help students and educators. Specifically, it includes:

It’s a huge win for St. Paul’s students and schools—but the work in the Twin Cities is far from over. “Although we’re pleased in St. Paul with this agreement, we know our union siblings across the river are in the same fight,” said SPFE President Leah VanDassor. “These are the things that are best for students across all districts.”

Meet the Members Who Wouldn’t Back Down

Several big issues drove St. Paul educators to the verge of striking last week. One was the mental-health needs of students; another was class sizes, which drive teachers’ ability to provide the personalized attention their students need—and deserve.

Here are some of the St. Paul members who fought for the schools their students deserve:

Fifteen years ago, René Myers became one of the first intervention specialists in St. Paul schools. “People in my position are the frontline,” she says, of the battle to meet the mental-health needs of children.

Poverty, hunger, homelessness—these traumas are common among her students, and their effects on mental health are well documented. As an intervention specialist at Hazel Park Prep Academy, a K-8 school, Myers works to develop relationships with students so that they know her, trust her, and turn to her before they explode or withdraw.

Two years ago, in the last round of contract negotiations, the district agreed to increase mental health supports across the district and to establish student mental-health teams at each school. Every school was provided an intervention specialist, and some social workers, counselors and school psychologists were also added. But then this year, the district’s negotiators attempted to roll it back and take back the guarantee of a team in every school.

That was simply unacceptable to St. Paul educators like Myers—and, in the end, the tentative agreement provided for more, not less, mental-health professionals in schools. “We’re in a pandemic! And I hesitate to say it’s over,” she says. “I can’t go into a room in my school without seeing a student or staff member who has lost somebody."

“To know what our students and staff have gone through, in the past two years, and to say we don’t need mental-health supports in our building? It’s like saying you don’t need air.”

On the best days in Lindsay Walker’s art classroom, her students are slinging paint, or their hands are covered in pastel dust, and they’re joyfully sharing their artwork. On the worst days, the traumas of the pandemic, of racism, and of poverty, are overwhelming.

“We had high needs [around mental health] even before George Floyd was murdered,” says Walker, referring to the Black Minnesotan murdered by a then-Minneapolis police officer. “Now, given the pandemic and being forced to learn online, plus all the things that have happened in our community these last few years, I see we’re not keeping up.”

Last week, Walker was ready to strike over several issues. One was the need for more mental-health professionals in schools. Another was class size. “When I’ve got 30 kids and 60 minutes per class, I can’t spend more than two minutes with every student, and that assumes I’ve constantly on the move,” she says. “Students need our one-on-one support, but we can’t provide it when class sizes are too large.”

Walker also sees how St. Paul’s stated commitment to equity doesn’t always translate into action. The district’s educational assistants are mostly Black, and they don’t get paid a living wage. (The  new agreement provides for a much-needed step in the right direction, with raises ranging from 7 to 11 percent, or 13 percent on average.)

“Let’s make it so the People of Color who work for St. Paul schools don’t have to work two jobs. When you’re putting your heart and soul into supporting students all day, you shouldn’t have to go home and get ready for your next job.”

“I’m a Montessori teacher by trade, and by purpose—and that comes with a perspective on child development,” says Diedra Carlson, who has taught in St. Paul’s Montessori classrooms since 2000.

“I’ve seen children with everything they need to develop and thrive. I’ve seen others who are struggling to thrive. And, in my estimation, they wouldn’t be struggling if they had more adults around them.”

Don’t tell her the district doesn’t have money to hire more mental-health specialists and teaching assistants. And don’t tell her the district doesn’t have the money they need to spend to keep adults in these underpaid, underappreciated roles. She knows about the $300 million in federal pandemic-relief funds sent to St. Paul schools this year—and, in the end, in the tentative agreement, some of that money was spent to provide $3,000 retention bonuses for all St. Paul educators.

Carlson and her colleagues have been working to the bone these past two years. “I’m going to break into tears over how much we’ve done—and the fact we’re not being affirmed for that?” she said last week.

Carlson also feels strongly that restorative practices, which go hand in hand with the Montessori emphasis on child development, be protected from the district’s disinterest. (And they were, in the tentative contract.)

Prioritize Where Rescue Funds Should Go

Help us rank what the funding priorities should be in your state and district to share with decision-makers.