Flint Educators Ask: ‘How Dare You Poison Our Children?'

Speaking up on behalf of students who have no voice or power, educators are determined to tackle the institutional racism that lies behind the Flint water crisis.

When teacher Michelle Gushen celebrated Martin Luther King, Jr.’s “I Have a Dream” speech in her Flint, Mich., high school classroom this year, every one of her students said they have a dream, too. And it’s about clean water.

“Who would ever think a child would have to ask for clean water in the United States?” Gushen asked NEA President Lily Eskelsen García during her February visit to the area. “And [we] don’t really have an answer for them,” Gushen said.

But NEA does have an answer for Flint students who have been asking their teachers if they’ll die from drinking the lead-poisoned water that poured from their faucets last year. The Association also has a message for lawmakers: Not for one more second will NEA stand idly by in the midst of the institutional and environmental racism that enabled the water crisis in Flint.

“My brave colleagues are worried and heartsick, but they are determined that justice will be done and their union makes them strong,” wrote Eskelsen García in a post to her blog, Lily’s Blackboard.

In the short term, this means NEA members will fight to hold accountable those who are responsible for poisoning some 8,000 Flint children, and press Congress to make critical investments in nurses, counselors, nutritional programs, and special education supports in every Flint school, says United Teachers of Flint President Karen Christian. Because the very best strategy to countering lead exposure in children, says Dr. Helen Binns, director of the lead evaluation clinic at Chicago Children’s Hospital, is to provide them with excellent educational experiences—at school and at home.

In the long term, it also means tackling the institutional racism that causes the excessive exposure of Black and Brown Americans to toxic air and water.

Not an Act of God

The Flint water crisis is entirely man made. At its headwaters are men who would sacrifice the health of poor, Black children to save some dollars.

The actions that would enable Flint to poison its own children kicked off in 2011, when Michigan Gov. Rick Snyder pushed through a far-reaching law that expanded his ability to seize power from the elected leaders of this majority Black city and hand it to an “emergency manager”—a person whose primary duties appear to be cutting costs.

The emergency manager law “rests on the premise that democracy in predominantly African-American cities is unnecessary and that the state knows best,” wrote Louise Seamster and Jessica Welburn in The Root. Indeed, 52 percent of Michigan’s African-American residents—compared to 2 percent of White residents—live in areas that are governed by emergency managers, report Detroit NAACP leaders.

In 2014, Flint’s profit-motivated managers made a decision: They would stop buying water from Detroit, ending 50 years of service, and instead get it from the Flint River—a graveyard for abandoned appliances and auto parts. The city figured to save about $8.5 million.

Soon after, Flint residents noticed changes in their water. A pastor told the New Yorker it got so stinky he stopped using it for baptisms. General Motors complained the water was rusting their auto parts. And yet, when Flint residents protested the smell, color, and taste of the water flowing from their taps, state officials told them to “relax.”

Eventually, a local pediatrician determined that the percentage of Flint children with lead poisoning doubled after Flint switched to the river, and even tripled in some neighborhoods. At the same time, Virginia Tech researchers found that at least a quarter of Flint households had water that exceeded regulatory limits for lead. In some homes, the drinking water actually met the definition of toxic waste.

“Everyone was being poisoned,” says Eskelsen García. 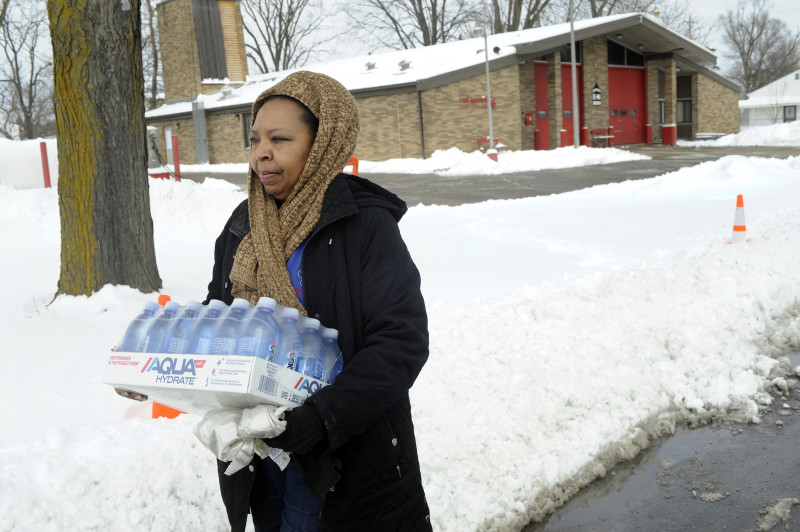 These days, the fifth- and sixth-graders in McClendon’s classroom play distractedly with plastic water bottles. This year’s students are less attentive than previous groups and “when you ask them a question, it’s gone like you didn’t teach them anything,” says McClendon worriedly. Is that because of lead poisoning? Or is it stress? This past fall, Flint kindergartners scored lower on readiness tests. Is that lead? Or changes in preschool curriculum?

The rash on McClendon’s face. The stomachaches and headaches suffered by Christian’s 10-year-old son. Every sign seems ominous. “Are we going to die?” is an actual question that students ask their teachers in Flint.

They are right to worry. Lead poisoning causes irreversible damage, and the effects are particularly destructive among children under 5, whose brains must develop so much at that age. Likely outcomes include delayed speech, attention deficits, hyperactivity, learning disabilities, impulsive behavior, increased aggression, and eventually, increased risk of dropping out. In 2002, a Pittsburgh study found that juveniles in a police detention center had more than 10 times as much lead in their bones than their peers.

Meanwhile, when school started this year, the district had just one school nurse for all of Flint’s 5,400 students.

In March, with little useful information coming from school district or state officials, the Michigan Education Association (MEA) brought in Dr. Binns, the director of the Chicago lead evaluation clinic, to talk with increasingly nervous Flint educators. A key message from Dr. Binns: Do not be “paralyzed” by the specter of lead poisoning. What you do in classrooms, and especially what parents do in homes, can have real cognitive benefits in children exposed to lead.

“When teachers create an environment where learning is taking place… and additionally work to engage families, it has been shown to have long-term impacts,” says Binns. “Maybe they should be distributing books, along with water!” 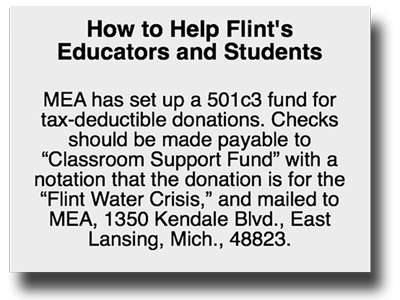 The union also is working with the Flint district to deliver more fresh fruits to schools. In a district as poor as Flint, where more than eight out of 10 students qualify for free lunch, fresh strawberries may be a rarity on snack trays. But foods high in vitamin C, alongside foods rich in iron, can dramatically reduce lead absorption.

This is not inexpensive work: That’s why NEA members are urging Congress to support funding legislation from U.S. Senators Debbie Stabenow and Gary Peters, and U.S. Rep. Dan Kildee, Democrats from Michigan. Their bills would provide up to $600 million to fix the city’s water and create a center to study lead’s effects on its children, and also money to invest in early education programs and school-based health centers.

In a joint letter to Congress, Christian and Eskelsen García warned, “The impacts of the Flint water crisis will not end when the story falls from national headlines. A long-term view is necessary to serve the needs of students throughout their K-12 careers.”

“Flint is absolutely symptomatic of a much larger disease, in which every environmental harm—from hazardous waste production and disposal, to all forms of industrial pollution—has a disproportionate impact on communities of color and low-income communities,” says Madeline Stano, a staff attorney at the Center on Race, Poverty, and the Environment (CRPE).

Hurricane Katrina is an example: Who got stuck in the Louisiana Superdome, “the shelter of last resort,” and whose neighborhoods suffered the worst flooding? There also are instances of environmental racism that even more directly affect students and educators. Since 1995, CRPE attorneys have represented Latino students in California who sued over their unequal exposure to plant pesticides near or on school grounds.

This year in Detroit, another majority-Black city governed by the governor’s appointees, teachers got so fed-up with seeing black mold and rodents run rampant in their classrooms that they staged sick-outs.

Environmental racism also affects educators who take on a “higher toxic load by working in those schools in those communities,” Stano points out.

But when educators do speak up, as they have in Flint and across the nation, it’s often on behalf of students who have no voice or power. “Teachers have a really credible voice when it comes to health and safety,” says Stano, “and using that voice is really powerful.” It’s also powerful, she adds, when educators help empower their students to speak for themselves, and to more than just dream of clean water.

Sabrina Holcomb contributed to this report.